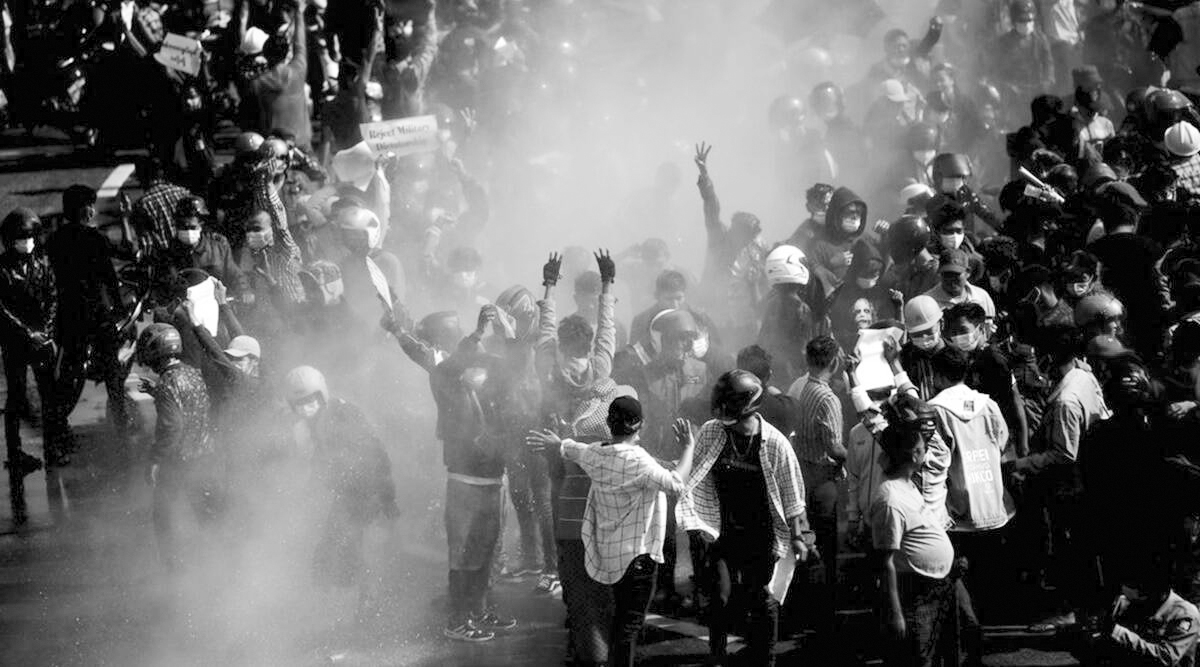 Myanmar Burning and its Implications

SINCE the military coup in Myanmar in February this year, Myanmar is burning. Thousands of people are on the streets protesting the military coup, the dismissal of democratically elected government and the arrest of Aung San Suu Kyi and her party colleagues. According to latest reports, more than 570 protesters were killed in the police firing to curb these protests using force. At least 2,728 people are said to be arrested and many more are claimed to be missing. No one knows their status.

Military coup and governance are not new in Myanmar. It is one of the countries in our neighbourhood that witnessed sustained military rule (1988-2011). It was after a prolonged struggle for democracy and people’s government that resulted in the military agreeing to cede some of its powers and allow for a government formed after the conduct of free elections. It was due to popular protests and also pressure from the international community that had forced the military rulers to release Aung San Suu Kyi, who was imprisoned for more than 15 years. In the subsequent elections, the party led by Suu Kyi, NLD, got elected after winning majority of the seats. However, Suu Kyi was not allowed to become the leader of the government as the military enacted constitution bars anyone who is married to a foreigner from holding high offices in the government. Hence, she became the state councilor. However, there were no doubts that she had exerted enormous influence on the government and the policies it had pursued. For this reason, the entire world rose in condemnation when the Rohingya massacres took place, under her watch (she being a Nobel Peace Prize winner).

In the elections held last year, many expected Suu Kyi’s party to take a beating at the hustings. They were proved wrong as, though marginally, NLD was able to increase its seats in the parliament. The party backed by the military was surprised with this result, which was criticised as being marred with malpractices. The election commission had denied all such allegations. Tensions between the military and the elected government were on the rise from that moment. Rumours started circulating that the military would not allow the re-elected government to take office. Indeed, they proved correct.

After executing the coup, military announced that it has taken control of the country for one year, with power handed to the commander-in-chief, General Min Aung Hlaing. It said the army had detained senior government leaders in response to ‘fraud’ during last year’s general election. The military has accused Suu Kyi of corruption, alleging she was given $600,000 plus gold bars by a political ally. Recently a shady businessman made a statement in the state TV that he personally handed cash to government ministers to help his businesses. He said the money included $100,000 given to Suu Kyi in 2018 for a charitable foundation named after her mother and another $150,000 in 2019, $50,000 in February 2020 and $250,000 in April 2020, for which he had not specified the reasons. The country's Anti-Corruption Commission has launched an investigation into the allegations and vowed to take action against Suu Kyi under the Anti-Corruption Law. She and President Win Myint have been charged so far with inciting unrest, possession of walkie-talkies and violating a pandemic order limiting public gatherings.

It is true that people of Myanmar are not happy with the Suu Kyi government. There was anger on the failure to ensure employment as was promised. Corruption at various levels of governance was resented. People were also not happy with the overall economic situation. On top of all this, the pandemic struck. People’s hopes on Suu Kyi as an icon of democracy were also dashed. She had a coterie of people who are loyal to her. Among them were many incompetent and shady characters. Suu Kyi was found to be not so eager in putting to practice the democratic cardinals she preached. Her government (de facto, that was what the NLD government was) had enacted and implemented many draconian laws, under which many were put in jails. Criticism was not tolerated. An impression was created that Suu Kyi was dictatorial.

The military expected all the above factors to act in its favour, when it moved to dispose the elected government and arrest Suu Kyi and her compatriots. As things stand today, it proved to be a miscalculation. The military seems to have assessed that there would be protests against the coup, but failed in calculating the scale of the protests. People were unhappy with the government, but were not ready to back the military rule and forego whatever democratic rights they had won after a hard struggle.

The recent protests against the military coup started with young people coming out to the streets, joined by trade unions. The resistance movement gained ascendancy when it was joined by a large number of professionals and middle-class employees. Doctors, nurses (health workers hold 10 per cent of all government jobs), bankers, grocers and many government officials too joined these protests. A large number of professionals are helping the protests by providing money, rations, shelter and legal aid. Grocers are supplying rations to active participants in the protests. Teachers are teaching free of cost.

As a result of these protests, the functioning of government offices, banks, hospitals and educational institutions are adversely affected. Due to the popular involvement, military personnel and their family members are publicly shamed and grocers are appealed to not cater to these families. The protesters claim that they aim to bring down the military rule by paralysing the country.

The response to these protests is severe. The military had recently released a list of wanted persons with their names, photographs and links to their social media accounts and residential address. This list includes many famous artists and cultural personalities. The military is threatening to arrest anyone who violates its orders and resorts to civil disobedience. Beatings and torture are being reported with increasing regularity. The military alleges that armed ‘terrorist’ groups with divisive agenda are leading these protests. It had already bombed some of the strongholds of such militant groups, like those bordering Thailand. These attacks destroyed many villages, forcing the villagers to flee, often crossing the borders.

A brief recap of the ethnic composition of Myanmar would not be out of place. Myanmar is country with around 135 ethnic groups. Of these, the Bamar consist the largest (around 50 per cent). They inhabit the central lands of the country. The rest 50 per cent of the population consists of many ethnic groups, who reside around the borders of the country. Myanmar shares 1,600 kilometres of land border with India. Similarly, it has a long land border with China and also Thailand and Bangladesh. Many of the ethnic groups thus reside in the remote areas, bordering these countries. Tensions between the majority ethnic group and other minorities existed since long. There are many militant ethnic groups that run their own armies and control much of these lands. For decades they have been fighting Myanmar’s armed forces.

The current protests are mainly taking place in the cities and towns of central Myanmar, inhabited by the majority ethnic Bamar. Some of the armed groups like that of the Karen (inhabiting the areas bordering Thailand) and Kachin (residing the region bordering China) have stated that they support the pro-democracy movement and would join them. On March 14, the disposed government of NLD, which is running a ‘government in exile’ called the Committee Representing the Pyidaungsu Hluttaw (CRPH), stated that people have a right to self-defence. They also stated that these ethnic armed forces are no longer ‘terrorist’ or ‘unlawful’ organisations. It expressed its intent to work with these groups, particularly naming the Kachin Political Interim Coordination Team, for realising ‘shared goals’, including the establishment of a federal democratic union. Though Suu Kyi and her team are still silent, many people who openly supported the attack on Rohingya’s and incited rage posting hate comments on social media platforms, are now apologising and appealing them to join the protests. They are demanding the establishment of a ‘federal army’ to fight the military.

The military too started appeasing sections of these armed ethnic groups. It had declared the Rakhine-based Arakan Army, among the country’s most formidable armed groups as not a ‘terroristic’ outfit. We need to remember that the attacks on Rohingya’s that shook the entire world were carried in the name of fighting the Arakan army in Rakhine.

Some commentators feel that the efforts by the NLD to appease these ethnic groups are not bound to succeed. They argue that many of these groups consider the NLD and Suu Kyi to represent the interests of the majority ethnic group Bamar. They consider NLD as a ‘nationalitist party’ established to protect the interests of this ethnic group. The benefits of ‘democratic rule’ of the NLD, for them, did not reach their areas. Moreover, in the last ten years of NLD rule, attacks on ethnic minorities increased. The attack on Rohingyas and Suu Kyi’s silence is a glaring example.

All these moves and counter-moves are bound to affect the social harmony in the country and further incite passions and attacks based on ethnicity. The spillover effect of these conflicts will have an impact on the bordering countries, India included.

It is a known and accepted fact that the Karen Liberation Army (KLA) is a creation of the British intelligence. Critics point out that the BBC, Radio Free Asia (US-funded), Voice of America, etc are aggressively campaigning against the military and are ‘closely coordinating with the young revolutionaries’. The natural question that arises is, what is their interest?

The interest lies in the geographical location of Myanmar. It not only does share a long border with both China and India, but also has access to the Bay of Bengal. Control of Bay of Bengal and the Malacca Straits means control of the sea lanes of the Indian Ocean. This is what the US is striving to achieve in the name of ‘Asia-pivot’ or ‘Indo-Pacific Strategy’ or controlling the ‘Asian Century’.

Unrest in Myanmar and the country descending into chaos, with armed conflicts bleeding it, weakens the country. This is the ideal situation for the US to enter and assert its presence. After pushing West Asia into chaos and perennial strife, East Asia is now the target. Imperialism is back enacting its well-known play-book. Use popular discontent, encourage armed conflicts, push the country into chaos, ensure a regime change and gain control. This was the scene that was enacted with flourish in Afghanistan and Iraq, later in West Asia/North Africa during the period of ‘Arab Revolutions’. Now it is being brought into play in Myanmar. All the sleeping cells are being activated for this purpose.

Allowing imperialist designs to succeed in Myanmar is dangerous. One should not be mislead to think that these moves are only targeted at China and check-mate its growth. India too would be severely affected by these designs. As the US had declared in 1991 itself (after the collapse of Soviet Union), it does not tolerate the growth of ‘any super-power’ that would threaten its hold on the world. Don’t forget, any, includes even India.

It is imperative for us to be wary of these imperialist designs and growing interventions in our neighbourhood. And, we should always support the democratic urge among the people and condemn all kinds of repression on popular protests.