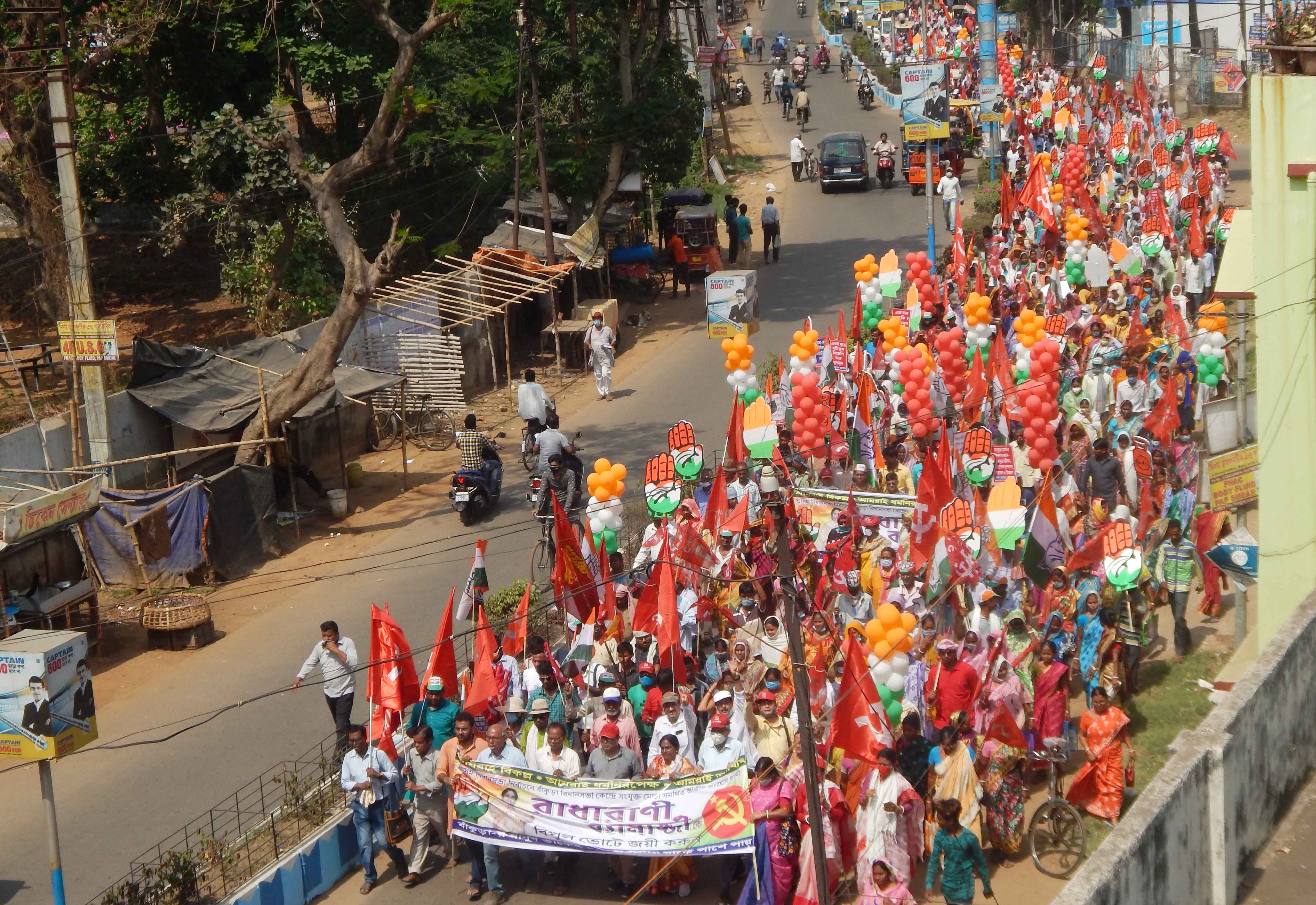 From our special correspondent

WEST Bengal is in the throes of the most crucial assembly elections which proposes to be a turning point in the history of the state. On one hand the state is plagued by the mal-administration of the Trinamool Congress government and on the other it is facing the danger of BJP’s aggression and politics of communal polarisation and divisive agenda. The two pronged attack by the central and the state governments have trapped the people of Bengal in a quagmire from which they desperately want respite. In this background, the Left Front led by the CPI(M), the Indian National Congress, and the newly floated Indian Secular Front came together to form the Sanjukta Morcha to take on the might of both the TMC and the BJP.

The first joint programme undertaken by this Morcha was the mammoth meeting at the historic Brigade Parade Grounds in the heart of Kolkata. This meeting was attended by lakhs and lakhs of people and it was addressed by the leadership of the LF, INC and ISF.

Ever since then, many small and medium sized meetings and rallies have been held in every nook and corner of the state by the leadership of the Morcha. The main objective of these meetings have been to make people aware of the alternative economic, political and social policies of the Morcha. While the BJP and TMC have been indulging in reciprocal mud-slinging and make-believe sabre-rattling, Sanjukta Morcha is reaching out to the poorest of the poor, the marginalised, and the oppressed sections of the people to hold their hands and convey to them about the work that the Morcha would do if voted to power. The leaders, candidates and workers of the Morcha are laying more stress in conducting door-to-door campaign rather than on the high octave super expensive media blitzkrieg launched by the BJP and TMC. These outreach programmes have evoked tremendous response among the people of Bengal. Sanjukta Morcha candidates are being welcomed with open arms. People are rushing out of their homes to meet, greet and share their woes with the candidates. The young brigade have been successful in arousing the youth and provoking them to be an integral part of the election campaign. Students and youth are thronging the meetings, rallies and other outreach programmes of Meenakshi Mukherjee, Pratikur Rahman, Srijan Bhattacharya, Sayandip Mitra, Madhuja Sen Roy, Dipshita Dhar, Aishe Ghosh, Pritha Ta and others. These sombre political exercises are being converted into colourful jamborees complete with sloganeering and singing of Ganasangeet. The youth of Bengal seem to have been galvanised and they are very vociferously making their demands heard. The yearning for a change is palpable.

The street corners are overflowing with bystanders who are attentively listening to the alternative policies. With no so-called crowd-puller celebrity gracing these meetings, the response of the local people is overwhelming. These gimmick-less gatherings and one-to-one meetings are helping the human connect between the candidates and the voters. The people are appreciating this personal touch and are going out of their way to connect with the candidates. The old and the infirm are blessing the candidates and garlanding them. All those people who have faced the brunt of the autocratic hooliganism of the TMC in the last ten years are holding on to the candidates pouring their hearts out and seeking succour. The poor villagers who have been deceived by the local TMC leadership and have not received money due to them from the various state and central government schemes are lodging their complaint with the candidates with the hope of getting justice. The people, especially, of rural Bengal, who want respite from the tyrannical rule of the TMC, are exuberant.

In many areas, massive gatherings are taking place after years. The shackles of repression have been broken and people are now ready to come out and express their opinions.

Left leaders, including Biman Basu, Surya Misra, Md Salim are harping on the threat of the BJP. The policies of the BJP and its divisive tactics are major points of attack from the Left leaders. What is being emphasised, simultaneously, is the crumbling and virtual surrender of the TMC thereby opening up spaces for the BJP.

The campaign unleashed by Sanjukta Morcha at various platforms are being appreciated by the people and by the netizens. The audio-visual clips are going viral. Ordinary people who usually do not want to associate themselves with any political activities have taken upon themselves to campaign for the Morcha in their own way. People are listening intently to what the leaders are saying. Roadside tea stalls, kirana shops, local markets, neighbourhood addas are abuzz with discussions about the candidates fielded by Sanjukta Morcha, their manifesto and the social media campaign. Even local newspapers and television channels are being forced to do stories on the campaign of the Morcha.

The positive campaign of the Morcha has touched a chord in people’s heart. The flamboyant falsehood of the BJP and TMC had set in a kind of fatigue in the people. The simple yet people friendly policies of Morcha are resonating with the people.

VETERAN CPI(M) leader and former chief minister Buddhadeb Bhattacharjee has appealed to the people of West Bengal to create a new history. Bhattachajee, who is unwell, has lauded the efforts of youth who have come forward to fight for democracy and secularism in the state.

In an audio message , Buddhadeb Bhattacharjee has said, this is a turning point in Bengal’s politics. During the Left Front government we raised the slogan that agriculture is our base, industry is our future. We tried to walk forward on that direction. We have achieved success in agriculture, industry started to progress. After the defeat of the Left Front, the TMC government has created a dangerous situation. From all considerations, the economy of the state has witnessed calamity and frustration. There is crisis in agriculture, peasantry is in deep crisis. On the other hand, industrialisation has been completely stopped in the state. In the last 10 years, not a single significant industry has come. There is silence of graveyard in Singur, Nandigram. We are witnessing anarchy in education, collapse of health system, requirements of civil life are ignored. In social sphere, democracy is being attacked. Authoritarian ruling party, their cadres, and anti-socials are united. Security of the women is gravely threatened. This situation cannot be allowed to last. Particularly, the youth who are the future of the country, are downhearted, entangled in frustration. Many youth are leaving the state. They are going to other states for an employment to live.

Bhattacharjee said, there is on one hand the authoritarian anarchy of the TMC, on the other the aggression of BJP. This has created a dangerous situation in the state but, it has brought a possibility too. Left Front, Congress and a secular party have united themselves in a joint platform to fight the election battle. The youth of the state have come forward to be in the forefront of this struggle. They want industry, education, and developed social values. The victory of the Left Democratic Secular forces will help to form a new government that can defend democracy, carry forward the communal amity in the state, and work with care for issues of livelihood of general people, workers, peasantry, working people.

Bhattacharjee appealed the people to recover Bengal from dangers and create a new history through electing a democratic secular government.