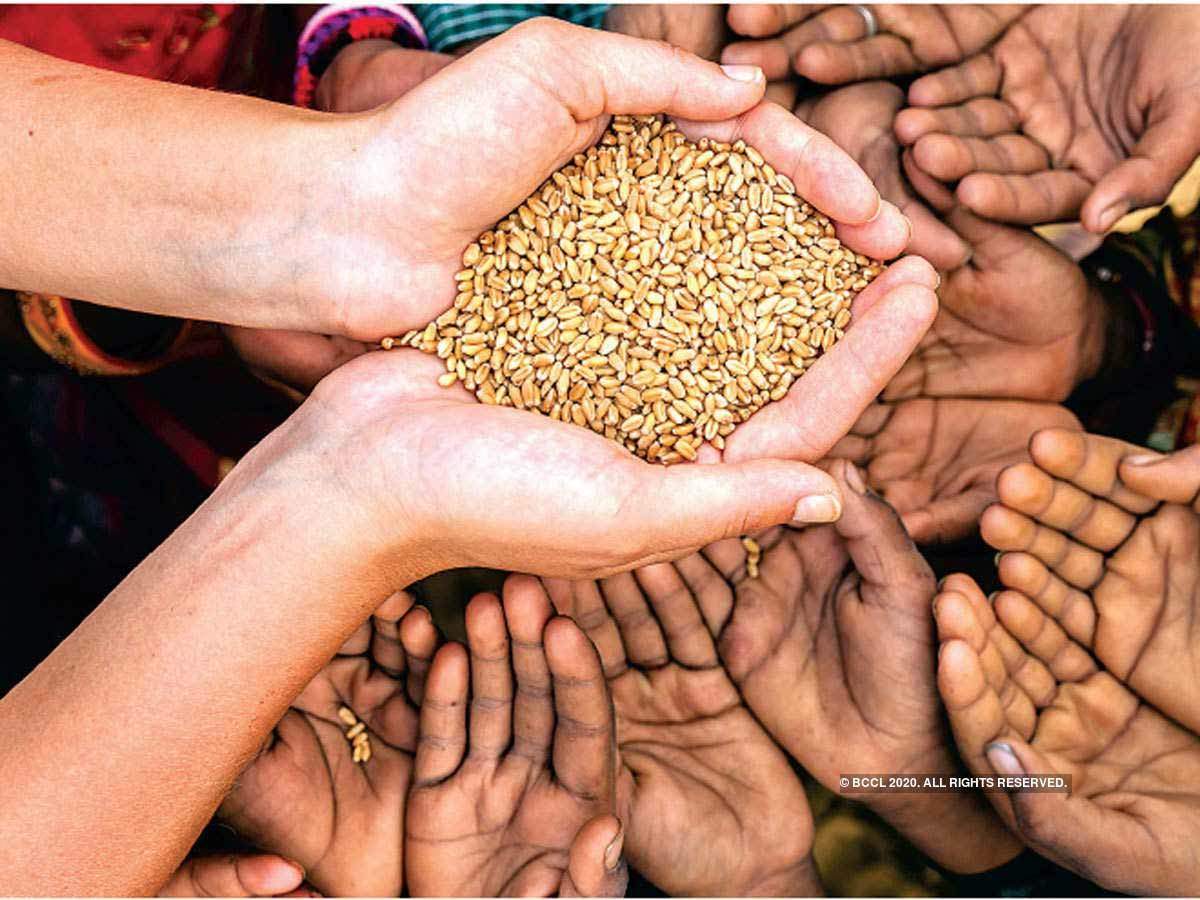 Fight to Defend and Strengthen the NFSA

AS on March 1, 2021, India has a huge buffer stock of food grains of 9.2 crore tonnes (including unmilled paddy) which is three times more than the mandated buffer. In 2019-2020 when the buffer stock was slightly less, according to the annual report of the FCI, the carrying costs of the buffer stock was over Rs 12,000 crore. Logically in a country which ranks at the higher end of the Global Hunger Index –92nd out of 107 countries – a moral and ethical food security policy in the light of availability of adequate foodgrains, would be to expand the distribution of the food grains in both quantity and coverage to bring relief to a malnourished population. However, the government is planning the opposite.

The Niti Aayog has reportedly recommended a drastic dilution of the National Food Security Act (NFSA) by reducing coverage from the mandated 75 per cent of the rural population to 60 per cent and the urban population coverage from 50 per cent to 40 per cent.  This will mean a reduction of 10 crore beneficiaries. The Niti Aayog also admits that over the years 2011 and 2021, the increase in population should have added at least 9 crore more beneficiaries. But the government continued to use the old 2011 figures. Now since the 2021 census figures are expected within a year, and the increase cannot be avoided any longer, the government wants to offset it by changing the law and reducing the coverage.

This is not a one-off suggestion. Within a few months of assuming office in 2014, the Modi government had set up the high level committee under BJP leader and former union minister Shanta Kumar to make recommendations regarding the functioning of the Food Corporation of India and related issues.  The HLC delivered what was expected of it – it recommended a “second look at the NFSA”. It knocked the bottom out of the Act by recommending that the coverage of 67 per cent of the population should be reduced to 40 per cent and that the central issue prices (CIP) should be raised. This latter recommendation has found an echo in the 2021 Economic Survey which wants the CIP to be hiked. The Niti Aayog calculates that if its suggestion of reduction in numbers of beneficiaries is implemented it will cut the food subsidy by Rs 49,000 crore. The Economic Survey suggestion of hiking the prices will further reduce the subsidy.  It is more than likely given the determination of the Modi government to cut subsidies to the people so as to continue and expand subsidies to the corporates, that India will face a dilution to the right to food security reflected in both coverage and importantly prices at which beneficiaries can access food grains through the public distribution system. This attack on the NFSA is intrinsically linked to the policy of production and procurement of food grains. The companion to the three anti-farmer agri laws is the attack on the NFSA.

Undoubtedly, the NFSA itself has some grave flaws including the continuation under a different nomenclature (priority and AAY) of the discredited APL and BPL system instead of a universalised system of public distribution. It also limits the allocation to 5 kg per individual without specifying the minimum allocation of 35 kg which the pre-NFSA BPL cardholders were entitled to. In 2013, the number of persons covered with some benefit was 81.35 crores (source dfpd.gov.in introduction percentage coverage nfsa). This is now 79.26 crores (dashboard nfsa.gov.in March 2021). A section of our population who had some benefit as APL is now totally excluded from the system. A critical demand in the coming days will be to save the NFSA and also to strengthen it by removing its flaws.

This article looks at some of the issues involved.

VIOLATION OF THE NFSA
Some of the important provisions of the NFSA are already being violated. Under Section 4 “every pregnant woman and lactating mother is entitled to a meal free of charge during pregnancy and six months after childbirth and (b) they are to get a cash subsidy of Rs 6000.” This latter section was not implemented till 2017 and then the law was truncated without amendments to the Act. Not only has the cash benefit been cut to Rs 5000, the conditions illegally imposed exclude at least 57 per cent of pregnant and lactating mothers from getting the legally mandated cash assistance, since it is applicable only for the first living child. Such births constitute only around 43 per cent of all births. Thus the majority of women are denied this right which they are eligible to receive under the law.

Similarly the NFSA gives children in primary and upper primary schools the right to a nutritious cooked mid day meal (MDM). However the budgetary allocations for mid day meal schemes, even though prices are going up, have actually decreased. Budget 2021-2022  cut the allocation for MDM  from the revised estimate of Rs 12,900 crore to Rs 11,500 crore. This affects the quality and quantity of food provided to the approximately  12 crore school children of the primary and upper primary level violating the norms of the legally mandated nutritious mid day meal, mandated by the NFSA.  Children between the age group of six months to six years are under the NFSA entitled to “age appropriate meal, free of charge... through local anganwadis.” However the allocations for anganwadis have been decreased thus affecting the meal scheme.

Thus an important and urgent demand must be to implement the NFSA mandated maternity related cash benefits to women and also increased allocations for the mid day meal scheme to ensure the NFSA norms for nutritious meals for children. Since anganwadis are key to the nutrition related schemes for women and children, increased allocations for anganwadis is also a crucial component for the implementation of the Act.

ANTODAYA ANNA CARDS
An Antodaya Anna Yojana (AAY) card holder is entitled to 35 kgs of food grains at the CIP of Rs 2 a kilo for wheat and RS 3 a kilo for rice. Under the NFSA, Sec 3 (1) it is the central government that decides the number of AAY households. The guidelines for the AAY specifically state the criteria for identification for eligibility for AAY cards. These include all PVTGs, landless agricultural workers, daily waged workers, families headed by widows, single women, disabled. Even while the numbers of the social sections entitled to such benefits has increased, the number of AAY households remained frozen since 2005 at 2.5 crore households.

In March 2015, in gross violation of the NFSA, the Modi government issued a circular that “when an AAY household becomes ineligible on account of migration, improvement in socio-economic status, death etc, the numbers of Antodaya households shall be reduced to that extent.” But what if the numbers of those whose socio economic status has worsened, not improved? Will they be added? The circular states “no Antodaya households should be identified in the state.”  As a result, the number of AAY card holders has come down from 2.5 crores to 2.35 crores – a reduction of 15 lakh households since 2013. The most recent example of this utterly cruel and unethical policy is reflected in the figures of the reduction of AAY beneficiaries during the worst period of the pandemic. There was a deletion of as many as 3.79 lakh AAY cards in 2020, the year of the gravest distress. Moreover another 71,982 AAY households have been designated as “silent ration card holders” since they have been unable to take their rations for three consecutive months. They are also at risk of being defined as fake card holders as there is no verification of the reason that they are ‘silent’. In one year of the pandemic, there is a net decline (additions and deletions) of 90,000 AAY beneficiaries (source: nfsa.gov.in).

So even while the Modi government was boasting of provision of free food grains and allocations for migrant workers, in reality the number of those entitled to 35 kgs a month under AAY was being reduced.

A most important demand is for the cancellation of the March 2015 order which is in violation of the NFSA and for the inclusion of all sections covered under the AAY guidelines.

As far as “priority’ households are concerned, during the pandemic the finance minister Nirmala Sitharaman had announced that 8 crore migrants would be provided ration cards and free food grains. The figures show that only 1.49 crore beneficiaries were added in the priority list. But shockingly in the same period 51 lakh beneficiaries were deleted from the list. In other words, a net addition of beneficiaries was less than one crore.

CANCELLATION OF RATION CARDS
AND CONDITIONALITIES
The Supreme Court hearing a PIL against the cancellation of three crore ration cards has commented that “this is a very serious matter” and issued notice to the central government. There are conflicting numbers of ration card cancellations put out by the government. In February 2017, the prime minister told the Lok Sabha that so successful was the “use of technology and Aadhar linkage with ration cards that 3.95 crore ration cards had been cancelled. Later the Hindustan Times which had filed an RTI to get details found that no such information was received from the states. However the message put out by the prime minister was clear enough: digital cancellation of ration cards was the right thing to aim at. Four years since the PM statement, the number of ration cards cancelled has indeed crossed the four crore mark.

In answer to an unstarred question (question no 632, February 6, 2018), parliament was informed that “a total of 2.75 crores bogus/ineligible ration cards have been deleted/cancelled during the years 2013-2017” ‘saving” about Rs 17,500 crore. The second report of the parliamentary standing committee of the food ministry dated December, 2019, stated that between 2016 and 2019, 1.49 crore ration cards had been cancelled. Taking these figures together, it can be assumed that since 2014 in the years of the Modi government at the centre and with the BJP ruling in most of the larger states at some time during these years, more than four crore ration cards have been cancelled.

The other aspect is of Aadhar card seeding with ration cards. The Supreme Court had accepted the use of Aadhar for all beneficiaries getting government benefits in various schemes. In May 2020, the central government issued a circular that “no one will be denied their food quota as the government has extended the seeding deadline of Aadhar until September 2020.” In other words, this confirms that Aadhar seeding is mandatory for accessing rations. In March 2021, the ministry site shows that out of 79.28 crore beneficiaries, 8.8 crore beneficiaries still have unseeded cards. They are at risk of having their cards cancelled. Additionally, ground reports show that substantial numbers of card holders are denied their rights to rations because of the mismatch of bio-metrics. Food security cannot and should not be linked to technologies which have a high risk of failure due to poor internet coverage, bio metric mismatch and faulty machines.

The false narrative of huge leakages from the rationing system and subsequent wastage of public money is promoted by neoliberal thinkers precisely to undermine an essential aspect of social security which is food security through the public distribution system and the NFSA. To guarantee this, India needs a food security system based on a universal right to food of minimum of 35 kgs per household with the continuation of the present central issue price of Rs 2 a kg of wheat and Rs 3 per kg of rice. The PDS must also add a basket of other essential food items at subsidised prices.

The struggle for food security takes place in the context of the policies of production and procurement of food grains linked to the rights of farmers, which are also under attack. These aspects will be looked at in a subsequent analysis.