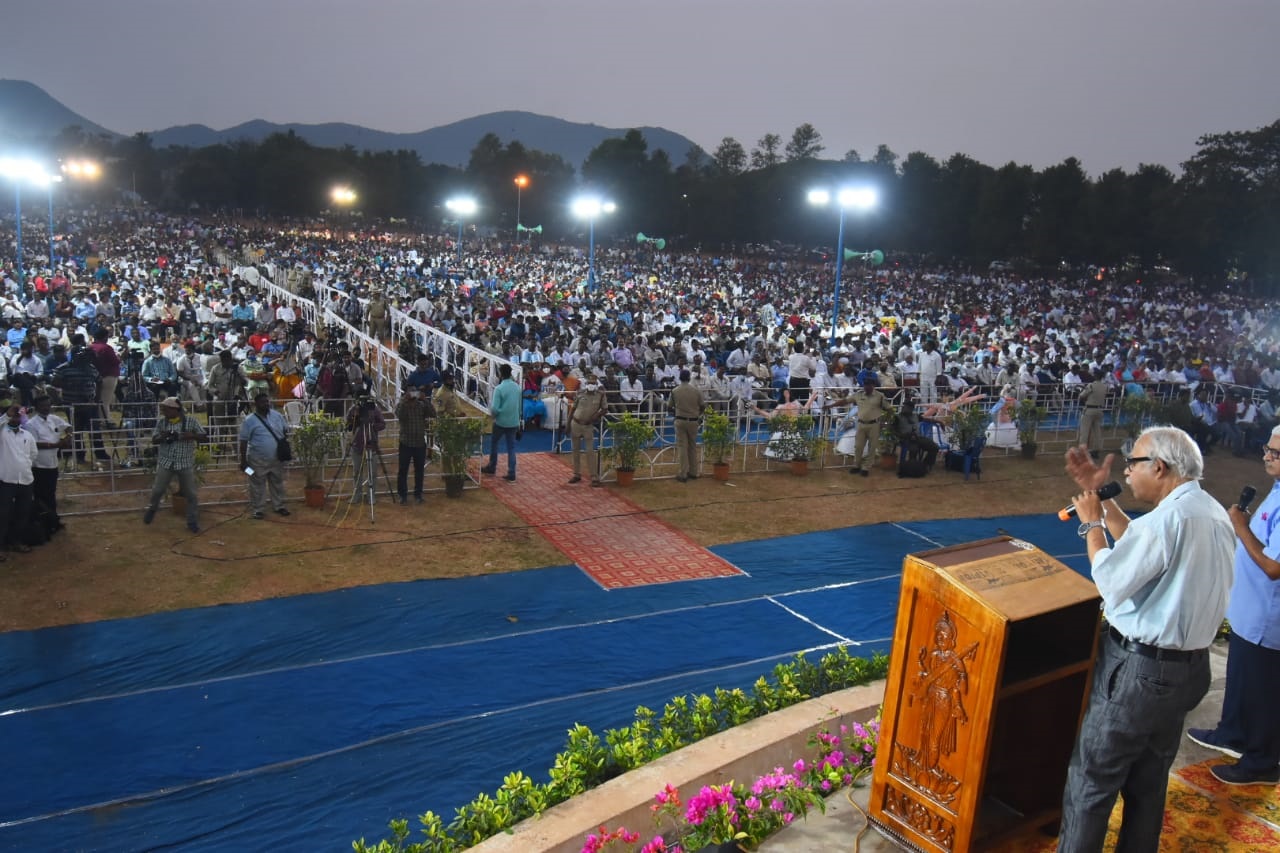 THE fight being put up by the employees and workers’ unions of the Visakhapatnam Steel Plant (VSP) against its privatisation is inspiring to those unions of public sector units (PSUs) and other establishments which are proposed to be privatised, across the country, said Tapan Sen, CITU general secretary.

Addressing a large public meeting, ‘Ukku Karmika Garjana’, organised by the Visakha Ukku Parirakshana Porata Committee, at Trishna grounds in VSP, on March 20, he raised the questioned as to why the centre is interested in the privatisation of the VSP rather than coming up with solutions to bring profits to the plant. He also said that VSP is the only integrated steel plant in India and demanded that the centre allot captive mines instead of privatising it.

Tapan Sen pointed out that the centre was privatising the VSP under the pretext that it was a loss making unit, but the policy makers should realise that the country's GDP has also been very low since the last two years. “Will the government be privatized,” he questioned.

Sen also alleged that the centre is intentionally privatising PSUs in the country. “32 persons had been killed in police firing during an agitation demanding the establishment of the VSP in 1966. If required, the agitation now will be scaled up to a level that forces the union government to rethink its decision,” Tapan Sen said. The union government had in the past tried to sell many PSUs such as IISCO in Burnpur, Durgapur Steel Plant and NLC India, but due to sustained agitation by the employees and unions, it had to drop the proposal. “The VSP’s case will also be the same,” he said.

Thousands of workers of VSP, their family members and working class of the Visakhapatnam city attended the meeting. Trade union leaders, irrespective of their affiliations, have joined hands and vowed to ensure that the Visakhapatnam Steel Plant (VSP) is not privatised.

AITUC general secretary, Amarjeet Kaur, speaking at the meeting, appealed to all the employees of various PSUs to join the agitation against privatisation of PSUs in the country including the VSP. She said that the fight of the employees of VSP would receive support from people from various walks of life in the state. “Steel plants are national assets and cannot be listed under non-strategic industries. Public sector steel plants are a lifeline for democracy and the cities in their vicinity,” Kaur said.

D K Pandey of Bharatiya Mazdoor Sangh (BMS) said that they would not support the privatisation policy of the BJP. He also added that the BMS would continue supporting the agitations against privatisation of VSP.

INTUC president G Sanjeev Reddy condemned the centre's move to privatise the steel plant which is a pride for the people of the State. He said that people, workers, members of various workers unions should stop voting for the BJP in the next polls.

Convenor of the committee and the general secretary of Steel plant recognised union, J Ayodhya Ram,  Ratnakar of TNTUC, Riyaz Ahmed of HMS, Rambabu of TRS Trade Union and others spoke.

The chairman of the committee, CITU state president Ch Narasinga Rao, Mantri Rajasekhar of INTUC, and Adinarayana of AITUC presided over the meeting. The ground resounded with the slogan “Visakha Ukku-Andhrula Hakku (Visakha Steel is the right of Telugu people).” Youth and women enthusiastically chanted the slogans.