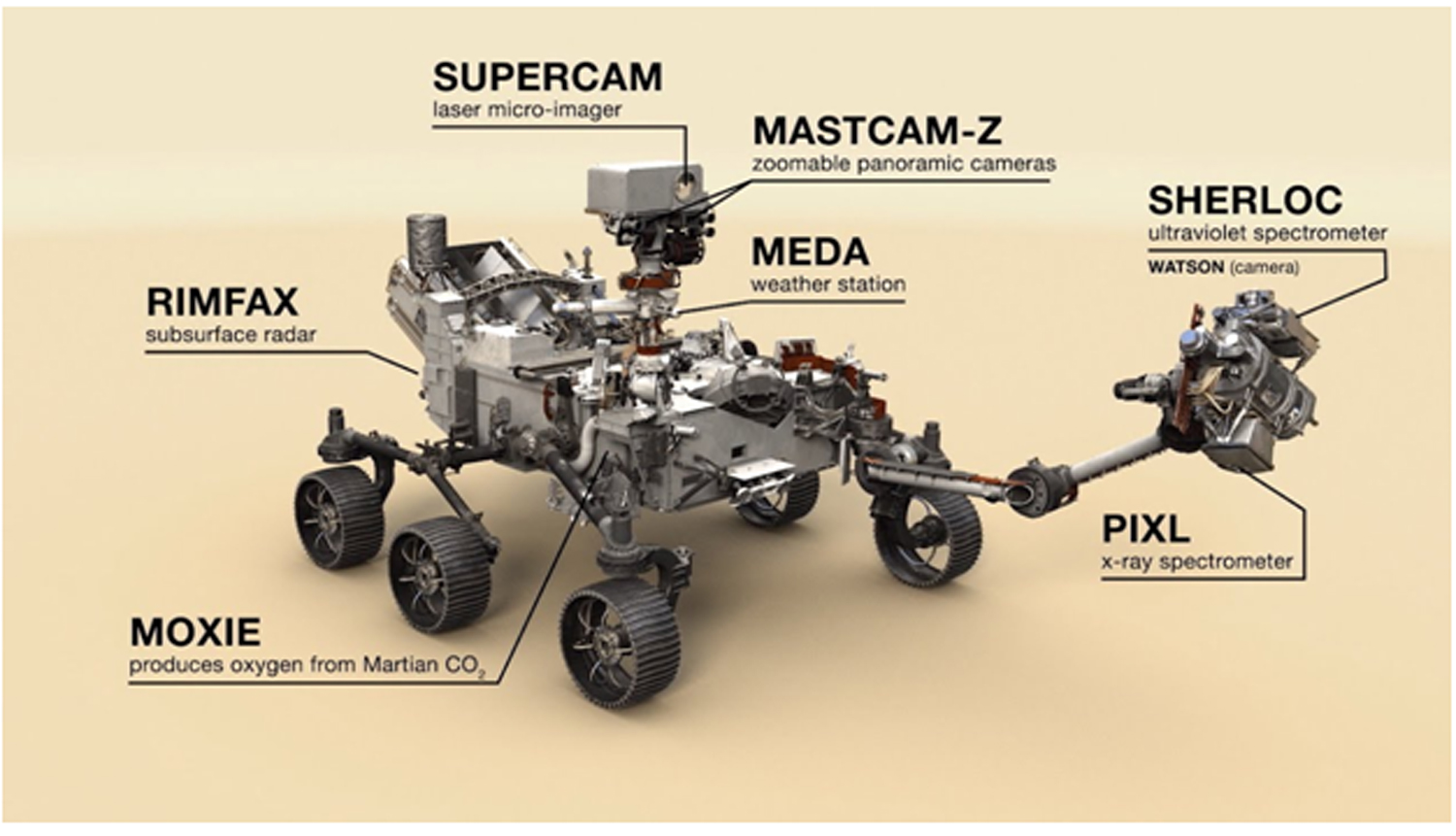 THERE is plenty to be depressed about these days. The year-long Covid-19 pandemic continues to plague people in India and around the world, the government obstinately refuses to engage with the existential issues raised by farmers, and freedom of speech and everyone expressing critical opinions face continued assault. In the midst of these dark clouds, recent space expeditions to Mars by the UAE and China, and especially the dramatic soft landing of NASA’s Perseverance Rover on the red planet streamed live at 2:30 am on Wednesday, February 24, 2021, came as welcome rays of light. Together they showed what perseverance in human endeavour can achieve and why it is necessary especially these days, the very quality cited by an 11-year old US school student who won the competition to name NASA’s rover, the heart of the Mars 2020 Mission.

NASA’s expedition, launched on July 30, 2020, was not the only one to Mars this year. In 2020, there was a relatively short launch window from end-July to mid-August given relative positions and orbital speeds around the Sun of Earth and Mars. If this window was missed, the next one opens only in mid-2022, thus the cluster of arrivals at Mars in mid-February 2021 after journeys of about 480 million kilometres.

The UAE’s Emirates Mars Mission’s al Amal (Hope) Orbiter entered Martian orbit on February 9, on a two-year mission to study the Martian atmosphere, the first space mission from any Arab or middle-eastern country. The very next day, China’s Tiawen-1 (“questions to the heavens”) spacecraft entered orbit around Mars on a geological study mission to be conducted by a lander and a rover, hoping to become only the second nation after the US to place a rover on Mars, and only the third country to achieve a soft landing there after the Soviet Union and the US, firmly stamping its presence in the front ranks of spacefaring nations.

This article would, however, focus on NASA’s mission and its several advanced, novel, intriguing and future-oriented aspects.

THE MISSION
NASA’s Mars 2020 Mission mainly seeks answers to astro-biological questions related to possible micro-biological life in the ancient past of Mars, and tests many technologies to prepare for subsequent robotic and crewed Mars missions. The mission duration is one Mars year, around 686 Earth days.

The pre-cursor 2002 NASA mission with the Curiosity rover, which is still working away at another location on Mars, had recently discovered evidence of organic molecules in rocks near the surface, and seasonal fluctuations of methane levels in the Martian atmosphere. Both these discoveries are exciting pointers, albeit preliminary and inconclusive, of possible existence of past life on Mars. However, organic molecules, while normally associated with life forms, can also be formed by non-biological processes. Similarly, fluctuations in atmospheric methane may not be related to biological processes but rather to climate-related processes. As a NASA scientist put it, through these initial findings, “Mars is telling us to keep searching for evidence of life.”

The Mars 2020 rover Mission looks for more definitive signs of past life by (a) identifying past environments capable of supporting microbial life, (b) seeking bio-signatures of the same, and (c) collect rock and soil samples that may contain such bio-signatures, and store them on the Martian surface for collection and return to earth for more detailed lab studies sometime in the future. The fourth major scientific objective of the present Mission is to test a technology for producing oxygen from the Martian atmosphere which contains over 95.32 per cent carbon dioxide, in preparation for future missions. The Mission also seeks to gather other science data and test different technologies for future robotic or crewed missions.

The landing site at the bottom of the Jezero crater was carefully selected from 60 potential sites. The crater was probably a 250m deep lake more than 3.5 billion years ago, with a large river delta where water once flowed and left layers of sediments of carbonates and silica which, on Earth, are known to preserve bio-signatures and hold microscopic fossils over billions of years.

ROVER, OTHER CRAFT
AND INSTRUMENTS
The Perseverance rover, by far the most advanced craft currently operating in space, is the main operator of the many pathbreaking Mission tasks, with the help of several first-time, highly innovative and upgraded instruments and technologies.

The spacecraft that carried the Perseverance rover is based on the design of the 2002 Curiosity rover, saving considerable new design effort and money. This design and the technique used to deploy the rover on Martian soil are unique in their ability to safely deliver much larger payloads than earlier, paving the way for soft landings of larger loads or crewed craft.

The spacecraft consists of several segments as may be seen in the accompanying exploded photo. On the top is the backshell descent stage with thrusters that control and steer the vehicle during guided descent. This also has the canister containing the parachute that is deployed during descent. Next is the heat shield that protects the payload together with the shell at the bottom. Under the heat shield is the distinctive descent stage with free-flying “jet pack” with eight thrusters and landing radars to slow and control the final descent. Just before landing, the descent stage lowers the rover gently on to the surface with two cables and a communication cord in the now famous “sky crane” maneuver.

The rover itself is an SUV-size 6-wheeled vehicle (10Lx9Wx7H feet), not counting the arm used to pick up samples. With the same chassis as the Curiosity rover, it weighs only around 1025kg. The rover is powered by a Multi-Mission Radio-isotope Thermoelectric Generator (MMRTG) producing electricity from heat released by 4kg of plutonium dioxide providing 100W steady power throughout the mission. Two rechargeable lithium-ion batteries provide supplementary power to meet peak demand. This enables Perseverance and its instruments to be free of the limitations of solar power and function reliably at night, in the harsh Martian winter, and during its notorious sandstorms.

Perseverance will pick up drilled rock core and soil samples, put them inside specially designed sealed canisters, and leave them on the surface in identified locations to be hopefully picked up in a later mission and returned to Earth. It is likely that this would be undertaken by a rover descending to Mars, picking up the canisters, launching to dock with an Orbiter to transfer the canisters, then returning home.

In a first, Perseverance will test a technology to produce oxygen from Martian atmospheric carbon. Any launches from Mars will need huge amounts of oxygen, not available in Mars’ atmosphere and impossibly expensive to freight from Earth. This technology, called MOXIE (Mars Oxygen In-situ Resource Utilization Experiment) sucks in carbon dioxide, compresses and filters it, then extracts oxygen by high-temperature electrolysis in a ceramic stack. The design has addressed the enormous challenges of extreme cold of minus 130 Celsius, dust-storms, and the need to frequently switch on and off to conserve energy. It makes only small quantities of oxygen which will therefore not be stored but monitored by different sensors and instruments.

Another innovative instrument on Perseverance is the interestingly named SHERLOC (Scanning Habitable Environments with Raman & Luminescence for Organics & Chemicals) which uses, for the first time on Mars, an ultra-violet laser and Raman spectrometer (so named since it uses the Raman effect discovered by the Indian Nobel laureate) to analyse minerals including organic compounds on the Martian surface from a distance.

INGENUITY “HELICOPTER”
A pioneering robotic rotorcraft, a helicopter-style drone named Ingenuity, is carried on the underside of the rover, as an independent experiment or technology demonstrator. The 1.8kg craft, including the battery, hopes to make the first powered flight outside Earth. This drone was designed taking into account the extremely thin atmosphere of Mars, with just 1per cent of Earth’s atmospheric pressure, the extreme cold and dusty conditions. To generate the required lift force, the twin contra-rotating blades are extra light, much larger and rotating much faster at 2400 rpm (revolutions per minute), than similar craft on Earth.

The rotocraft will be deployed roughly 60-90 Mars days after landing. It will undertake autonomous flights and act as a scout for the rover, relaying information back to it. It is expected to undertake only five flights. If successful, Ingenuity will pave the way for future and larger drones that could perform more arduous tasks in future missions.

On a lighter vein, Indian readers would be interested to know that the name Ingenuity was suggested by a 14 year-old Indian-American student, Vaneeza Rupani, initially for the rover but NASA felt it was most appropriate for the truly ingenious rotocraft! The other Indian connection with the Mission was the by now famous NASA-JPL announcer and lead scientist for control, navigation and descent of the spacecraft, Svati Mohan, whose bindi showing above her large mask, made waves around the world. Also, ISRO is also an important collaborator with the UAE Space Agency in its Mars Mission.