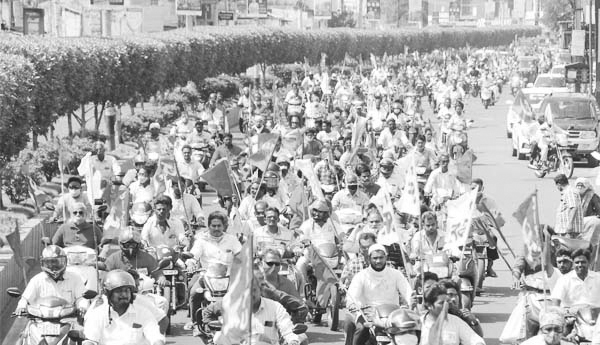 THE Modi government’s decision to privatise Visakhapatnam Steel Plant has resulted in widespread protests from across the state of Andhra Pradesh. A relay hunger strike camp was staged by the Visakhapatnam Steel Conservation Struggle Committee (VSCSC) near the main gate on February 12. Dr Kolla Rajamohan Rao, who was a part of the Students’ Action Committee of the historic Vizag Steel movement back in 1966-67, shared his experiences of being a part of the “Visakha Ukku - Andhrula Hakku'' movement. He paid tributes to the 32 martyrs of the movement and the hundreds of youth wounded in police firing and lathi charges. He appealed for a united mass movement to protect the Plant from privatisation.

The inaugural meeting was chaired by J Ayodhyaram, leader of the Steel Plant recognised union and the convener of the VSCSC. Chairman of the VSCSC and the state president of CITU, Ch Narasinga Rao said that the working class, with the support of the people, has been defending the Plant from the machinations of the central government and has many times foiled its attempts of privatisation.

Minister Muttamsetty Srinivas who stood in support of the protestors said that no government shall be allowed to privatise the Steel Plant, the fruits of a heroic long-drawn struggle of the Telugu people. Other two chairmen of VSCSC, D Adinarayana (AITUC) and M Rajasekhar (INTUC) and others spoke on the occasion.

Prominent persons, peoples’ representatives and people from all walks of life have visited the relay hunger strike camp and expressed their solidarity. B V Raghavulu, Polit Bureau member of CPI(M), visited the camp and garlanded the leaders on hunger strike, on February 15. He appealed to the working class to carry on the struggle by drawing inspiration from the protesting farmers in the country’s capital. He appealed to all the political parties and the mass organisations to support the workers in their fight to protect the Steel Plant.

Former chief minister N Chandrababu Naidu visited the camp and expressed solidarity with the struggle. He said that the MPs and MLAs of TDP are ready to resign to protect the Steel Plant and urged the ruling YSRCP also to come forward and do the same. Leader of YSRCP in Rajyasabha, Vijaya Sai Reddy also visited the camp and extended the support of his party and said that all political parties shall be united in this agitation. Actor R Narayana Murthy and many other dignitaries greeted the striking workers and extended their solidarity.

STUDENT-YOUTH
BIKE RALLIES
A bike rally, launched by MLCs V Balasubhramanyam and K Narsimha Reddy on February 14, in support of the VSCSC, took off in Guntur, from the statue of Amrutha Rao, the martyr of the Visakhapatnam Steel Plant struggle in 1966-67, and ended at the Visakhapatnam Steel Plant. Through the rally, they appealed to the younger generation to take the spirit of the prolonged struggle of the 60s for the Vizag Steel and urged them to get prepared for a statewide united movement to protect the public sector firms. The bike rally was organised under the banner of the joint action committee of mass organisations, formed at state level.

V Umamaheswararao, CITU state secretary and G Obulesu, AITUC state general secretary greeted the rally. Leaders of SFI, DYFI, AISF, AIYF, PDSU and other organisations were in the forefront of the rally with hundreds of bikes. The rally passed through Krishna, West Godavari, and East Godavari districts and reached Visakhapatnam on February 17, and was greeted by AIDWA, ICEU, AIKS and other mass organisations.

Meanwhile, bike rallies were organised from Kurnool and Tirupati to Kadapa in protest against the central government which failed to keep up its promise of setting up a steel plant in Kadapa during the state division. CITU state general secretary M A Gafoor flagged off the rally at Kurnool on February 14. Police obstructed the rally on its way and arrested the rallyists. Another rally from Tirupati reached Kadapa on the 16th as it was scheduled. Tenant farmers’ association leader V Srinivasa Rao spoke in the concluding meeting of the rally and exposed the wrong deeds of the Modi government.