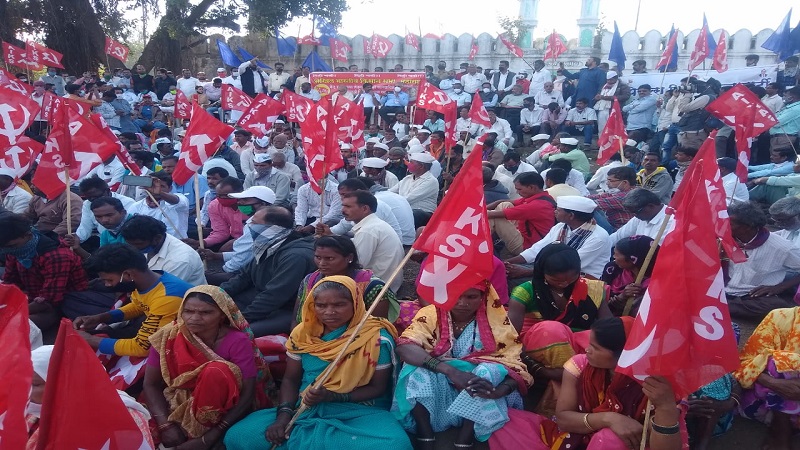 Claiming that the world is appreciating the manner in which India handled the pandemic, Modi refused to take a critical view at how his government handled the Covid pandemic and miseries imposed by his abrupt, unplanned, unprepared national lockdown. This also destroyed the already sinking Indian economy with unemployment rising exponentially. This was accompanied by growth of hunger and malnutrition, particularly of our children and their mothers. India has the second largest Covid cases in the world with over 1.5 lakh people dead. There was not one reference to the plight of lakhs of migrant labourers either.

Each of the PM’s claims can be rebutted and shown to be hollow. But amongst the many things that he spoke of, some issues need to be joined.

FARMERS PROTESTS - ANDOLAN JEEVI
Speaking about the struggle of our kisans, he said that great benefits were given during the last six years of his government to Indian agriculture and farmers. He refused to express any remorse at the loss of life of more than 200 farmers in this struggle.

On the contrary, he hurled insinuations against those who are in this historic struggle by labelling them as andolan jeevi. He went on to categorise the protestors as parjeevi, parasites. It is through an epic people’s (andolan jeevi’s) freedom struggle that India became independent. It was due to this struggle that, `We, the People’ adopted our constitution giving ourselves a secular, democratic republic and a system of parliamentary democracy. It is because of this that Modi is today the PM of India.

Lakhs of people have become martyrs in this freedom struggle. But not one from the RSS/BJP family can be counted as having sacrificed their lives for the country’s freedom and for the development of modern India. It is a well-established fact that the RSS stayed away from the national movement, at times collaborating with the British.  For a person who owes his rise as India’s prime minister to the protest movements launched by the BJP, this is a calculated move to castigate protestors as andolan jeevis.  This is an outright effort to depoliticise our people, so that the narrative of the RSS – a rabidly intolerant fascistic `Hindu Rashtra’ can be established without any protest.

There are two types of protests. One, protests and struggles that changed India for the better, including people’s lives and their livelihoods. Such positive struggles continue to contribute today by  rising in defence of the Indian constitution and protesting against this government’s efforts to destroy our  constitutional order and institutions.  The other category of protestors are those who raise issues to divide our people to spread hatred and violence and destabilise our society. For instance, the BJP’s  rath yatra in 1990s left behind a trial of bloodshed and communal riots where thousands lost their lives.  This ultimately led to the demolition of the Babri Masjid, a black blot on India’s secular democratic foundations. Every single report of judicial enquiry committees into various communal riots that took place over  decades squarely point the finger at the role of the RSS in instigating communal hatred leading to horrendous riots and loss of lives. It is these sort of andolan jeevis that the country and the people must beware of.

Lakhs of kisans, workers, working people, students, youth, women, dalits, adivasis are on the path of struggles today against the growing atrocities and abrogation of their constitutionally-guaranteed rights that have currently gripped the country under this government.  This BJP government’s answer is to sharpen communal polarisation further, divide the people, prosecute and jail human rights and civil liberty activists under draconian laws.  Democracy is speedily being transformed into destruction of people’s rights and  display of fascistic intolerance and violence.

FOREIGN DESTRUCTIVE IDEOLOGY
As is the habit of the Indian ruling classes to blame a “foreign hand” behind people’s movements in defence of our constitutional order, PM Modi went on to describe these historic struggles, notably the kisan struggle, as products of the foreign destructive ideology, FDI.  There is nothing `foreign’ in people rising in defence of our constitution, democracy, our institutions and their own rights. Probably what the PM was referring to is the international outcry against the manner in which  this government is suppressing this kisan struggle.  There cannot be a bigger insult of our kisans, who are our annadatas.  They produce the grains because of which all of us, including the prime minister, live and these annadatas are being termed by PM as andolan jeevis and parjeevis. Parjeevis or parasites are those who live off the produce of our annadatas.

HOLLOW CLAIMS
Modi claimed that during the last six years under his stewardship, un-precedented gains have been made  in Indian agriculture and by our farmers.  Quoting late Charan Singh, PM said that his government took adequate measures to help improve the lives of the small and marginal farmers, whom Charan Singh had estimated to be around 51 per cent of the peasantry (which Modi claims as grown to over 70 per cent now).  He claims that his policies have targeted this section and improved their life.

It is precisely to improve the lives of this section of rural India that the Rural Employment Guarantee scheme was demanded by the Left and finally implemented by the UPA government.

A scheme that Modi ridiculed in opposition and systematically curtailed it during the last six years.  During these six years, peasants suicides continued unabated.  Even in the most prosperous state which gained from the Green Revolution – Punjab – the average monthly income of a farm household, according to NSS data, was Rs 18,059 working out to a per capita of Rs 3,450. Corresponding figures for Haryana are Rs 14,434 and Rs 2.450.  What we have seen in this historic kisan struggle is that the entire peasantry has united in opposition to these three farm laws.

The fundamental demand being that they should be scrapped.

AGRI REFORMS
The prime minister charged the opposition by saying that all of them wanted agricultural reforms but now they are opposing  because his government has brought them.  There can be nothing farther from the truth.  Yes, most parties have sought agri reforms. But, what type of reforms?  The CPI(M) had demanded reforms to strengthen Indian agriculture, ensure food security in the country and give a remunerative price to the farmers while providing food to the people at affordable cost.

These agri laws, on the contrary, destroy Indian agriculture, place our farmers at the mercy of corporates, both foreign and domestic, and jeopardise food security. That is why this opposition to these three farm laws, which the CPI(M) registered both in the parliament and outside.

MINIMUM SUPPORT PRICE
The prime minister said: “The MSP is there, MSP was there and MSP will be there”.  He had earlier claimed that his government was the first one to implement the Swaminathan Commission’s recommendations. There can be, again, nothing farther from the truth.  The Swaminathan Commission recommended an MSP of C2+50 per cent. What this government gives, at best, is A2+50 per cent. The difference  between the two is significant. While A2 is the actual paid
out cost, C2 includes rental value of own land and interest on value of own fixed capital assets. The central government, thus, negates the Swaminathan Com-mission recommendation on MSP apart from ignoring all other suggestions.

The CPI(M) 2019 election manifesto contains in the section on `Agricultural Reforms’, the first point demanding the legal right to sell at MSP to all
farmers.  Since at least 2017, this was being raised by the CPI(M) MPs in the parliament, but till date, the central government has not enacted such a law.  Further, the MSP must include all agricultural crops and cover all the farmers. At present, it only covers 6 per cent of the farmers.  Further, an MSP without an efficient procurement mechanism is meaningless. So, the procurement system, both public and private, must be  made universal all over the country.

WILD CLAIMS
As is his habit, PM made certain wild claims.  With an eye on West Bengal election, PM claimed that Netaji Subhas Chandra Bose had stated that: “India was not just the biggest democracy, but the mother of democracy”.  Democracy in the sense that we are used to under the Indian Constitution was established only in 1950 with the first general elections taking place in 1952. Most unlikely that Netaji had said anything like this about India’s modern secular democratic system of parliamentary democracy before it was established. Likewise, he said that Green Revolution  was initiated by PM Lal Bahadur Shastri, while it was in 1966 under PM Indira Gandhi. Like in the past, PM Modi seems to be confident that he can get away with just about any-thing, however preposterous it may be.

PM says that the protests against these farm laws lack substance and everybody keeps talking of protests but not of the reasons behind the protests.  The reasons behind the protests are obvious and have been conveyed to PM and his government ad nauseam. The implications of these farm laws have been analysed threadbare and are part of public knowledge. Those who oppose the farm laws  are those who uphold the prosperity of Indian agriculture and our farmers – annadatas. Those who propagate and support the farm laws are those who facilitate the loot of Indian agriculture, our produce and our markets for predatory profit maximisation by the corporates.  Who these corporates are have also been unambiguously identified by our annadatas. The reasons for these historic protests are, thus, obvious – to save Indian agriculture, Indian people and India’s food security.

These  three laws must be repealed.  Subsequently the government must discuss agri reforms with our kisans, their corporate cronies and all other stakeholders and fresh proposals, if any,  must be brought before the parliament for its scrutiny and deliberations and then enacted.  This is the most reasonable proposition. PM Modi must abandon his obduracy and repeal these laws.