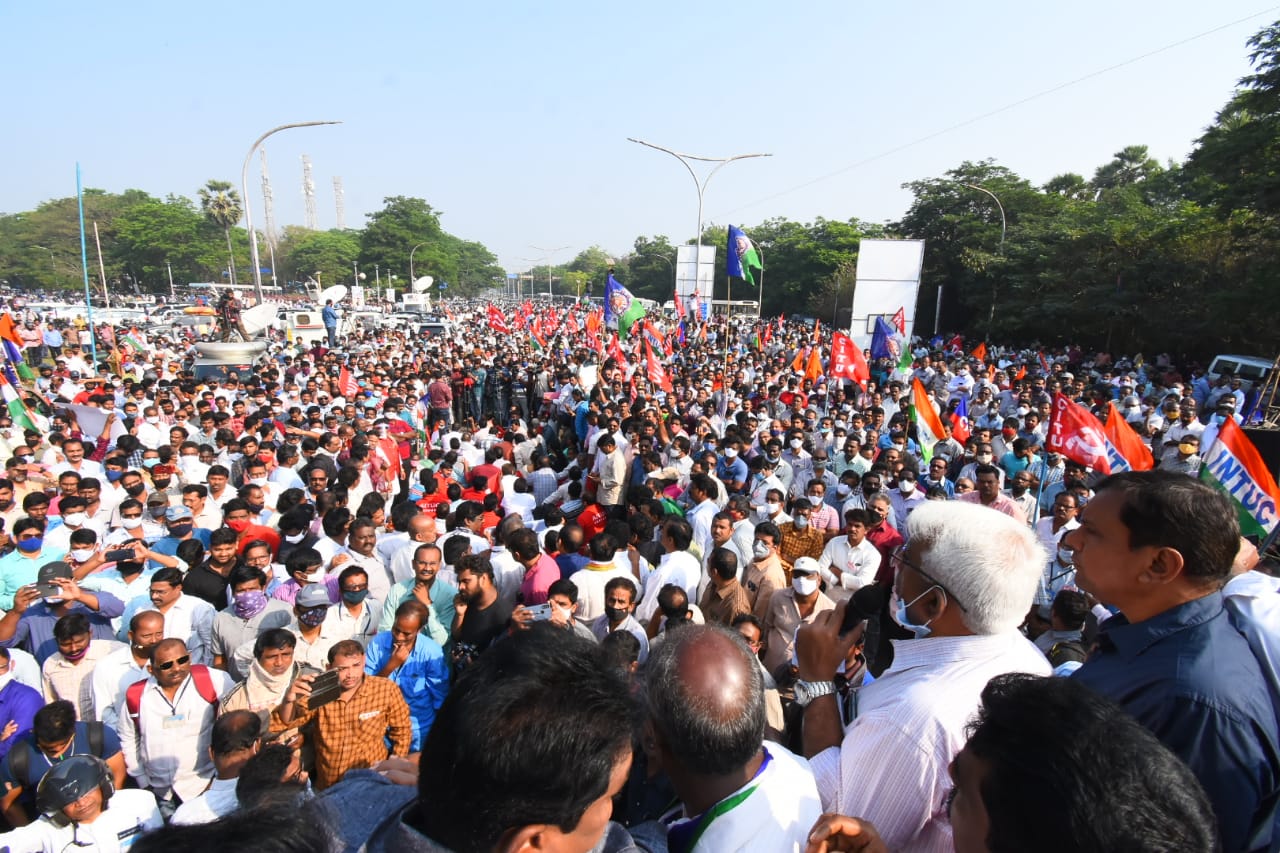 AP: Do or Die Struggle to Protect Vizag Steel Plant

WHILE the whole nation was discussing about the farmers’ parade on January 26, the central cabinet unleashed an attack on Andhra Pradesh by announcing the 100 per cent strategic sale of Visakhapatnam Steel Plant. How can the country achieve self-reliance when the government has resolved to sell away the prestigious Visakhapatnam Steel Plant is the big question.  The BJP government must answer the people.

Sujana Choudhary, former central minister and BJP Rajya Sabha MP has openly said that “heavens will not fall if the Steel Plant is sold away” and that the plant will remain at the same place even if it is sold. He also went on record saying that “selling away the plant will save it from further deterioration”. In order to hand over the steel plant worth Rs 3 lakh crores to the corporates on a silver platter, the ruling dispensation is confusing the people through their unwarranted comments. The BJP government is drawing its sketch to discreetly handover the lands worth Rs 2 lakh crores to its cronies, for just Rs 4-5 thousand crores. IDPL, a big pharmaceutical industry, was closed in order to encourage and enrich private pharmaceutical industry. Now the private pharmaceutical companies are swallowing peoples’ incomes with high prices of medicines. The veiled plan is to erase the public sector industry from the map of India. To kill a dog, it has to be called mad. That is the strategy of the government. The BJP propaganda is also the same – first they say the plant is incurring losses, then it is also said that the plant is not functioning effectively, and hence it is the right time to sell it away. This is nothing but a blatant lie.

The central government initially gave Rs 5000 crores only for the plant capacity of 1.2 million tonnes. But later on, the government did not provide any capital for the steel plant. But sufficient funds were sanctioned for the Bhilai and Bokaro steel plants. The expansion of the Visakhapatnam Steel Plant from 3.2 million tonnes capacity to 6.3 million tonnes was met with by the plant’s own finances. The expansion costed Rs 12,500 crores, of which Rs 6000 crores was borrowed from financial institutions. The burden of the interest on borrowing is borne by the plant. Presently, expansion from 6.3 million tonnes to 7.3 million tonnes is taken up with an additional investment of Rs 9000 crores. It is not out of place to mention that the central government has not given a single rupee for the expansions.  In 2004-05 alone, the plant earned a profit of Rs 2008 crores. In 2018-19, it achieved a turnover of Rs 20,884 crores. It is common knowledge that the domestic steel prices fluctuate with the international prices. In the current Covid-19 pandemic, the steel industry is incurring losses. The BJP is fooling the people of India by showing this loss as a reason to sell the plant which is highly deplorable, while the brighter side is concealed by the government – the plant has paid the government a whopping Rs 40,302 crore as dividends and taxes. During 2008, the economic crisis caused many steel plants to close down. ESSAR company closed down after evading Rs 50,000 crores of bank loans. No action was taken. The BJP government is conspiring since a long time to sell away the effectively run Visakhapatnam Steel Plant to its cronies.

The governments have tried their best several times to privatise the steel plant. But every time the people of Andhra Pradesh have joined the workers and officers of the plant in their struggle against privatisation. It is only because of this resistance, that even one per cent of the shares could not be privatised. The people of the region and the workers have been undeterred in their struggles and will continue to do so till the government withdraws its proposal of strategic sale, allots captive mines to Visakhapatnam Steel Plant, failing which the BJP will have to pay a huge price.