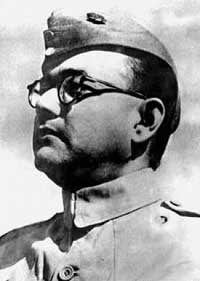 ON January 23, the 124th birth anniversary of Subhas Chandra Bose, the prime minister visited Kolkata in order to inaugurate the year-long celebrations planned by his government of this event. While he indulged in fulsome praise of Subhas, he did not mention anything of any relevance to his life or his beliefs.   This was very similar to what he had done on October 21, 2018, when donning a black cap similar to the one that Subhas Bose had worn for many years, he had made a speech from the Red Fort, celebrating the establishment on that date in 1945 of the Arzi Hukumat of Azad Hind by Bose.  Of course, he used the English translation, provisional government of Azad Hind rather than the original Urdu. Strangely enough, he did not refer to the famous Red Fort Trial of the three INA officers who were tried for treason by a British Military Court.  If he had, he would have had to mention that one of them was General Shahnawaz.

The prime minister’s reasons for making dramatic announcements about observing important dates connected with Subhas Bose do not appear to be inspired by respect for his role in the national movement or his commitment to the unity of the Indian people.  On the contrary, he is motivated by his obsession with demonising Jawaharlal Nehru, his dire need to acquire reflected glory from Bose’s undiminished reputation since his own Sangh Parivar is sadly lacking in any association with the battle for independence and, most recently, his cynical determination to use his public adulation of Subhas Bose to garner votes in the forthcoming assembly elections in Bengal.

In actual fact, members of the prime minister’s Sangh Parivar have been most unsparing in their vicious attacks on Subhas Bose.  From the l930’s to the present time, various pen-pushers belonging to their ranks like Sitaram Goel and Sarvesh K Tiwari along with luminaries like Savarkar and Syama Prasad Mukherjee have referred to Bose as a ‘Hindu’ jehadi, as someone who genuflected before Muslim communalism and as a politician who did more to fight the Hindutva forces than any other.  It is Bose’s unflinching commitment to secularism that is the inspiration behind these attacks.

In his unfinished autobiography, An Indian Pilgrim, Subhas writes "I was lucky… that the environment in which I grew up was on the whole conducive to the broadening of my mind…”  He grew up in Cuttack in the Oriya bazaar which was part of a predominantly Muslim locality and his family’s  neighbours were mostly Muslims who treated his father, Janakinath Bose, like a patriarch. Janaki Babu had Muslim servants and cooks and the Bose family participated in all Muslim festivals, like Moharrum etc.  Subhas goes on to say in his autobiography "In fact I cannot remember even to have looked upon Muslims as different from ourselves in any way except that they go to pray in Mosque."

This attitude remained with him all his life.  Subhas was also opposed to all forms of caste-discrimination.  As a student, he once spent weeks nursing a dalit classmate who was suffering from cholera.  He differed from Gandhi in his approach to the problem of untouchability.  He wanted to see the end of caste differences and was a strong supporter of inter-caste marriages.

Subhas’ attachment to the movement for freedom began in his student days and was instrumental in his resigning from the ICS immediately after he qualified.  He returned to India and threw himself into the national movement.  At a very young age, he won election to the post of chief executive officer of the Calcutta Corporation in 1924.  He was astonished to find that despite the fact that they were equal in number to the Hindu population of the city, very few Muslims had found employment in the corporation.  He immediately set about to remedy this and, to the 33 posts that were vacant at the time, he appointed 25 Muslims saying, “In (the) past Hindus have enjoyed what maybe regarded monopoly in matters of appointments. The claims of Mohammedans, Christians and Depressed Classes have to be favourably considered, though it is sure to give rise to a certain amount of heart-burning among the Hindu candidates.” Of the eight seats that remained, he appointed Hindus belonging to the dalit and general communities and also some Anglo-Indians.

By this time, Subhas had emerged as an important national leader of the Congress.  In his presidential address to the Maharashtra Provincial Congress, 1928, he said, ‘You cannot establish political democracy and at the same time resist the democratisation of the society.  No my friends, let us not become a queer mixture of political democrats and social conservatives....Privileges based on birth, caste or creed should go...The status of women should also be raised...As things stand today, the different communities that inhabit India are too exclusive.  In order to facilitate rapprochement a dose of secular and scientific training is necessary...there is no better remedy for fanaticism than secular and scientific education.’

It was as Congress president that Subhas resolved a long-standing problem with regard to the singing of Bande Mataram at Congress sessions which was much resented by many Muslim Congressmen since some of the verses of the song had communal overtones. His predecessors had found it expedient to ignore the issue which, of course, led to it becoming a cause for polarisation. Subhas was determined to set things right.  He consulted Rabindranath Tagore whose views he knew to be close to his own.  Tagore wrote to him suggesting that only the first verse of the song be sung.  Subhas could use Tagore’s letter to have his way in the Congress and, from then onwards, only the first verse of the song was sung during Party functions.

Subhas was bitterly opposed to the politics of the Hindu Mahasabha. When Syama Prasad Mukherjee joined Hindu Mahasabha,  he wrote in his diary that Bose met him and told him if he went about building  the Hindu Mahasabha as a political body in Bengal, he (Subhas Chandra Bose) would see to it, BY FORCE IF NEED BE, THAT IT WAS BROKEN BEFORE IT WAS REALLY BORN. (Mukherjee’s emphasis.)  According to Balraj Madhok, another prominent Hindu Mahasabha leader, ‘Subhas Chandra Bose with help of his supporters, decided to intimidate the Mahasabha by use of force. His men would break-up all Mahasabha meetings and beat up the candidates.’  Subhas himself used to say that strong opposition to the Mahasabha was necessary to prevent them from spreading their communal poison in society.

Subhas’ misgivings about the Mahasabha were proved correct by later events.  Syama Prasad Mukherjee went to the extent of writing letters to the British government to come down heavily on Congressmen and women taking part in the 1942 Quit India Movement and Savarkar actively recruited thousands of  ‘Hindus’ to serve in the British armed forces once the World War broke out.

It was after assuming leadership of the INA that Subhas could put many of his ideas about strengthening the unity of all Indians into practice. Gandhi, a strong critic of Subhas, had to admit: “Though the INA failed in their immediate objective, they have a lot to their credit….The greatest among these was to gather together under one banner, men from all religions and races of India, and infuse into them the spirit of solidarity and oneness to the utter exclusion of all communal and parochial sentiment.”

Subhas inherited an army which was made up in large part by Punjabis, Muslims, Hindus and Sikhs and many of the officers were Punjabi Muslims.  Subhas was able to gain their absolute loyalty by his words and deeds.  Long after independence and partition, many of the Muslim officers, now citizens of Pakistan, would speak of Subhas with tears in their eyes.  Their children and grandchildren were brought up on stories of a man who inspired the utmost confidence and in whom people of every community could repose their faith.

One of the stories that was repeated most often was that of Subhas’ visit to the Singapore Chettiars’ temple where he was to be weighed against coins and gold to be used for the INA.  He was accompanied by several INA officers including Abid Hasan and Zaman Kiani.  Seeing them, Subhas’ hosts were quite disconcerted and, although the donation was critical to the INA’s survival, Subhas turned around to leave.  The Chettiars rushed after him and apologised profusely.  Subhas returned, accompanied by his officers who willingly allowed their hosts to paste tikas on their foreheads.  After the weighing ceremony was completed and Subhas came out of the temple, he immediately rubbed the tika off his own forehead saying that ‘mixing religion with my uniform will finish my army.’

The INA men and women ate together and stayed in barracks, irrespective of caste and creed.  Many years later, when hundreds of them were made prisoners by the British and incarcerated in the Red Fort, tea sellers arrived there selling ‘Muslim tea’ and ‘Hindu tea’.  These soldiers poured the tea from both containers into their canteens and said ‘We are Subhas’ soldiers and this is Hindustani tea.’

The greatest affirmation of Subhas’ unshirking belief in the possibility of uniting people belonging to different faiths, regions, castes and linguistic groups was the unprecedented way in which the Indian people responded to the Red Fort Trial of the three INA officers, Gen. Shahnawaz Khan, Col. P K Sahgal and Maj. G S Dhillon, a Muslim, Hindu and Sikh officer.  It was the trial that had made people aware of the formation of Subhas Bose’s INA.  The trial itself brought them in droves to the Red Fort everyday and demonstrations in support of the three INA officers swelled in every town and city. Tens of thousands of people came out in the streets demanding their release. It was the last demonstration of Hindu-Muslim unity before partition.

There are many lessons that Narendra Modi could learn from Subhas Chandra Bose but it is unlikely that he would want to.