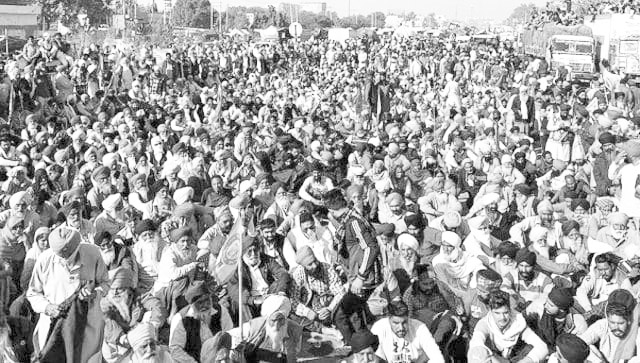 THE Supreme Court of India (SC), after hearing a clutch of petitions on the farmers’ struggle, but completely ignoring the ones that challenged the very constitutionality of the three Farm Laws criticized the central government for its handling of the farmers' struggle on January 11 and suspended the implementation of the Farm Laws ‘until further notice’ on January 12. But all this was effectively nullified by its constitution of a four-member committee which comprises government lackeys, all of whom have publicly supported the Farm Laws and are clear votaries of neo-liberal policies and corporate invasion of Indian agriculture. The four infamous individuals are: Ashok Gulati, Anil Ghanwat, P K Joshi and Bhupinder Singh Mann. What recommendations such a committee will make can be surmised even before it begins its work.

This made it crystal clear on which side the SC really stood. This was hardly surprising, given its record over the last few years. Crucial cases challenging the constitutional validity of the CAA, the abolition of Article 370, the withdrawal of statehood to Jammu and Kashmir, the crony corporate issue of electoral bonds, are all kept on the back burner for years. Bail for the Bhima Koregaon detenus is denied for years, while Arnab Goswami gets bail in double-quick time.

SKM REJECTS COMMITTEE EVEN BEFORE ITS FORMATION
The Samyukta Kisan Morcha (SKM), which is leading the farmers' struggle, declared in a press release on January 11, even before the SC announced the names of the committee, that it is “not willing to participate in any proceedings before a committee that may be appointed by the Hon’ble Supreme Court.” On January 12, after the announcement of the committee, the SKM while reiterating that it would not participate in any such committee process, said, “One of our apprehensions about such a process got validated in the very constitution of the committee. It is clear that the court is being misguided by various forces even in its constitution of a committee. These are people who are known for their support to the three Farm Acts and have actively advocated for the same. It is not out of place to remind that the farmer unions have rejected a committee proposal from the government too. Our dialogue is basically with an elected government about its policy directions and concomitant laws.”

The SKM in its statement then hit out hard against the central government and its three Farm Acts, “Farmers have explained in detail to GOI(government of India) that the three laws will lead to corporate control over agricultural production, processing and markets. It will lead to high cost of inputs, higher debts on peasants, lower the crop prices, increase farmer losses, decrease government procurement, end PDS, raise food costs, increase farmer and agricultural worker suicides, hunger deaths and eviction from land due to debts. The government has hidden these hard facts from the people and the courts.” It then reiterated its future programme of a nationwide struggle given below.

Earlier, on January 7, a rehearsal tractor march of over 5,000 tractors with tens of thousands of farmers from Punjab, Haryana, UP, Uttarakhand, Rajasthan and MP was held on the KMP bypass road near Delhi. It was a truly magnificent sight.

FUTURE PROGRAMME OF NATIONWIDE STRUGGLE
On New Year’s Day, January 1, the SKM held its meeting at the Singhu border. After taking stock of the situation, it unanimously decided on the future programme of nationwide struggle. This was announced on January 2 at the first press conference of the SKM that was held in Delhi at the Press Club of India. All earlier press meets were held at the Singhu border. This press conference was addressed by Balbir Singh Rajewal, Darshan Pal, Gurnam Singh Chadhuni, Ashok Dhawale, Jagjit Singh Dallewal, Abhimanyu Kohad and Yogendra Yadav.

The future programme of nationwide struggle is as follows. From January 6 to 20, a fortnight-long nationwide campaign to counter the government’s propaganda, called ‘Desh Jagruti Abhiyan’ will be conducted through rallies, meetings, conferences and dharnas. Lohri on January 13 will be marked as ‘Kisan Sankalp Divas’ by burning copies of the three Farm Laws. January 18 will be celebrated as ‘Mahila Kisan Divas’ to underline the role of women farmers.

‘Azad Hind Kisan Diwas’ will be marked on Netaji Subhash Chandra Bose’s birth anniversary on January 23 by large protests outside the governor’s official residences in all state capitals. On Republic Day, January 26, lakhs of farmers at the Delhi borders will march into Delhi with thousands of their tractors, trolleys and other vehicles. This historic ‘Farmers Republic Parade’ will take place in Delhi after the official parade. Similar farmers’ parades will take place that day in all state capitals and district centres throughout the country. A call will be given to the working class and all other sections of the people to join these parades across the country.

FRUITLESS TALKS WITH GOVERNMENT
The seventh and eighth round of talks between the BJP-led central government and the Samyukta Kisan Manch(SKM) on January 4 and 8, 2021, yielded no result. The SKM was even more resolute in demanding an outright repeal of all three Farm Acts. It began the meeting by paying homage to over 55 kisan martyrs who had lost their lives in the last 40 days of the struggle near Delhi. It took the firm position that discussion on a law to ensure a just MSP and procurement would take place only after the government agreed to repeal the three Farm Acts. There was complete unanimity in the SKM on this stand. Among those in the talks were AIKS general secretary, Hannan Mollah, Punjab general secretary, Major Singh Punnewal and other leaders. The next round is scheduled for January 15, but there is doubt whether this meeting will take place after the SC ruling.

HUMAN SPIRIT TRIUMPHS
January 3, the day before the seventh round of talks, Delhi and its environs were lashed by torrential rains. The rain staged a repeat performance on January 5 and 6. This greatly increased the already bitter cold of January. The plight of lakhs of farmers – children, women and men - who have laid siege to the capital on all the five borders – Singhu, Tikri, Ghazipur, Palwal and Shahjahanpur – had to be seen to be believed. The people were drenched. Mud and slush abounded. The roads were full of water and dirt.

And yet, the human spirit triumphed over it all. The fire of rage against their class oppressors burnt even more brightly, brushing aside the rain and the cold with contempt. Nothing would shake them from their resolve of getting rid of the hated black laws thrust upon them by the most insensitive, authoritarian and crony corporate regime since our country’s independence.

This magnificent spectacle rekindled memories of our glorious freedom struggle against British imperialism. The rulers of today were then the boot-lickers of the British. On the other hand, the fighters of today proudly held aloft the shining legacy of Kartar Singh Sarabha, Khudiram Bose, Bhagat Singh, Rajguru, Sukhdev, Chandrashekhar Azad, Jatin Das, Ashfaqullah Khan and Ram Prasad Bismil. They had combated repression in this struggle. They had overcome defamation. They would also triumph over nature. This was how the steel was tempered.

As per the AIKS call, peasant leaders and activists from other states are also reaching Delhi. Around 1,000 peasants led by the AIKS in Maharashtra came in a five-day vehicle jatha from Nashik and stayed at the Shahjahanpur border for a week from December 25. Another AIKS cultural team from Maharashtra went to all five borders and presented an inspiring programme of songs and slogans. Over 1,000 peasants led by the AIKS from the southernmost state of Kerala will leave this week in buses to reach Delhi. Hundreds of farmers from Odisha and some from Jammu and Kashmir have reached Delhi. Some other states will also join soon.

SIGNIFICANT KERALA ASSEMBLY RESOLUTION
A major political development was the resolution unanimously passed by the Kerala Assembly on December 31. Kerala chief minister, Pinarayi Vijayan moved a resolution in the state assembly against the three farm laws, which was unanimously passed by the house with the ruling LDF, opposition Congress-led UDF and the BJP supporting it.

Vijayan attacked the BJP-led NDA government at the centre over the three contentious laws against which farmers are agitating in Delhi. The resolution was moved in a one-hour special session convened solely to discuss the farmers’ issue and express solidarity with them.

While moving the resolution demanding the immediate scrapping of the new laws, Vijayan said the country was now witnessing one of the most iconic protests ever by farmers in its history. “The central farm laws, passed in Parliament, were not only “anti-farmer” but also “pro-corporate,” he alleged. “Legislative assemblies have the moral responsibility to take a serious view when people have anxieties about certain laws which affect their lives,” he said, adding that agriculture was part of the culture of the country. The centre had come up with the contentious laws at a time when the agriculture sector was facing serious challenges.

Tripura saw large joint demonstrations of thousands of peasants at Agartala and several other centres. At Gulbarga in Karnataka, an indefinite sit-in struggle is on, in which different sections of society are joining every day. A bus yatra began from January 1 in Telangana and it will course through the entire state for a month. Innumerable jathas are moving from village to village in West Bengal. Sit-ins are being organised at various centres in Tamil Nadu. In Bihar, Assam, Odisha, Jharkhand, Chhattisgarh and elsewhere, the struggle is intensifying.

In Maharashtra, a broad meeting of over 100 leading activists of various organisations was held in Mumbai on January 12 to plan the struggle calls given by the SKM. It was attended by Ashok Dhawale, P Sainath, Teesta Setalvad, Pratibha Shinde, Vidya Chavan, R Ramakumar, Mahendra Singh, Vivek Monteiro, S K Rege, Prakash Reddy, Raju Korde, S V Jadhav, Feroze Mithiborwala, Avinash Patil, Sanjay M G and many others. It decided to organise a massive statewide mahapadav in Mumbai from January 24-26, culminating in a huge parade on Republic Day.

Hundreds of scheme workers took out rallies at various borders, on January 1, at Singhu and Ghazipur, on January 4 at Palwal, on January 5 at Tikri. CITU general secretary, Tapan Sen flagged off the rally on January 1 at the Singhu border. The marches were addressed by leaders of Anganwadi, ASHA and MDM workers federations, A R Sindhu and Usharani. On January 6, around 3,000 construction workers led by CWFI president, Sukhbir Singh marched in solidarity at Shahjahanpur. Various other sectors like electricity, transport etc also held solidarity actions.

AIAWU had given a nationwide solidarity call for January 6-7 which was widely observed. AIDWA, DYFI and SFI have also led good solidarity actions all over the country.

SAVITRIBAI PHULE BIRTH ANNIVERSARY
January 3 was the birth anniversary of the pioneering social reformer Savitribai Phule, who had set up the first girls’ school in India at Pune way back in 1848. Several organisations like AIDWA and joint forums like ‘Hum Agar Uthe Nahin Toh’ decided to celebrate the day at all the five borders of the Delhi struggle, and also throughout the country.