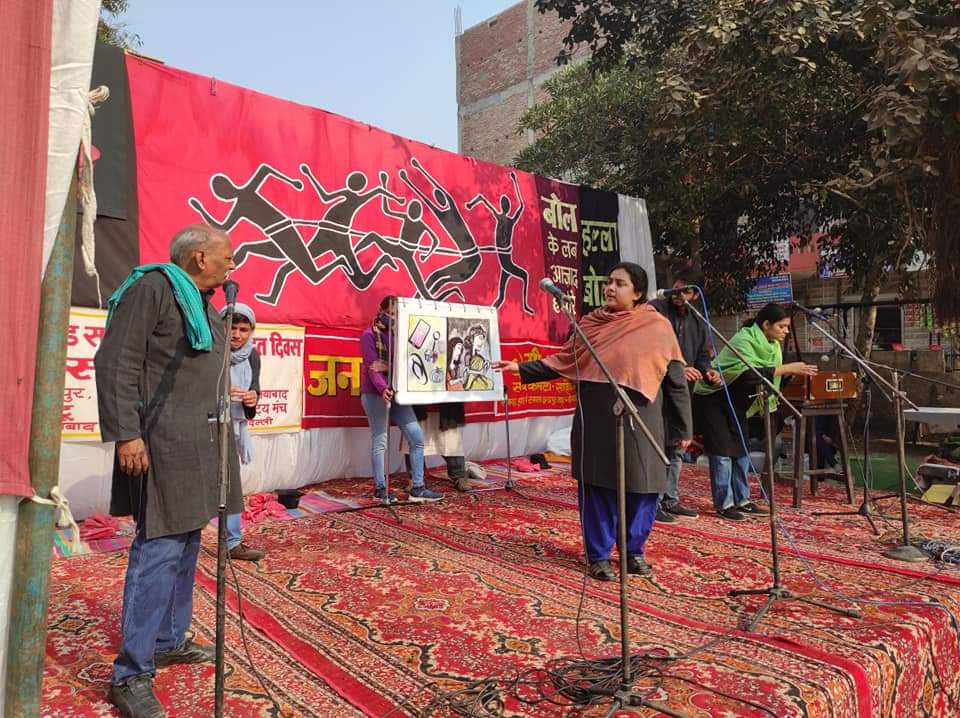 ONE of the inspiring images of the year that went by is of young Aishe Ghosh, head bandaged and arm in a sling, addressing students the day after a violent assault on her and others in the Jawaharlal Nehru University in early January 2020. That assault had been orchestrated by goons of the Akhil Bharatiya Vidyarthi Parishad, the student wing of the RSS. Aishe Ghosh, as president of the JNU Students’ Union, was a special target for the goons, who assaulted her with iron rods. Far from being cowed down, Aishe returned from the hospital straight to the campus and gave a stirring speech, applauded by hundreds of students, in which she reiterated the resolve of the student community to not give an inch to the fascist goons.

It was therefore fitting that Aishe Ghosh was the main speaker at the joint CITU-Jana Natya Manch event on January 1, 2021, at Jhandapur, Sahibabad, on the outskirts of Delhi. This is an annual gathering to commemorate the killings of Safdar Hashmi and Ram Bahadur, when Jana Natya Manch was attacked while performing a street play in support of workers’ rights on the morning of January 1, 1989. Ram Bahadur, a young migrant worker from Nepal who had recently become a father, was shot dead, while Safdar Hashmi was brutally beaten up. He died in hospital on the night of January 2. Safdar’s funeral procession on January 3 became a massive demonstration of anguish and anger, with thousands of people from all walks of life joining in. On January 4, less than 48 hours after Safdar’s death, Jana Natya Manch, led by Moloyashree Hashmi, staged the interrupted play, Halla Bol, on the very spot where Safdar had been killed.

Since then, every year on January 1, Jana Natya Manch returns to the site of Safdar’s martyrdom, along with CITU, to stage plays, sing songs, and hold a public meeting. The event is generally attended by about a thousand or more workers, their families, and residents of Jhandapur, located in the heart of Site IV Industrial Area. This year, however, with the threat of the novel coronavirus still in the air, CITU and Jana Natya Manch decided to have a smaller programme, both in terms of the length of the event, as well as in terms of the attendance. Normally, the audience sits of durries on the ground. This year, the organisers arranged for chairs so that social distancing could be maintained. The event was attended by about 500 people. What made the programme special was also that thousands of farmers are currently laying siege to Delhi at various entry points from other states. In fact, the Ghazipur border is just a few kilometers from Jhandapur, and Jana Natya Manch had performed there, as well as at Tikri border, less than a week before. Jana Natya Manch also sang songs at the Singhu border on the morning of January 2.

Aishe Ghosh said that she was not even born when the murderous attack on Jana Natya Manch took place, so there was no question of meeting him personally. She encountered Safdar through the plays of Jana Natya Manch, and through the poems and songs he wrote. Safdar believed that art was not for mindless entertainment, but to reflect the lives and struggles of the people. All of society, she said, owes a debt to the working people, because without the fruits of labour, none of us would be able to have any of the things that we need to live. In the last six years, the exploitation of the working people has increased exponentially. This is because the Modi government, which is actually an RSS government, has organised a systematic transfer of resources from the poor to the rich.

What is the point, she asked, of tom-toming your poor past, if you cannot do anything for the poor in the present? Is there a single policy that the Modi government has implemented which is truly in favour of the poor? The answer is a resounding No! Modi promised ‘vikas’, development, but the only people who have benefitted from development are the Adanis and the Ambanis. The ordinary people have got nothing but increasing poverty. This government does not believe in love, she said. It trades in the currency of hate. Whenever the ordinary people organise themselves to resist this government, the RSS-led forces instigate violence, as we saw earlier in Delhi. Aishe Ghosh castigated the government for its record on a string of issues, including demonetization, GST implementation, lockdown, and anti-farmer laws. In particular, she spoke about the state of higher education and the lack of jobs for the youth. Other speakers included the CPI(M) Delhi Secretary and veteran trade unionist K.M. Tiwari, and trade union leaders Virendra Gaur and Brijesh Singh.

Jana Natya Manch’s play is titled Kis Oar Ho Tum? (Which Side Are You On?) in the form of a cantastoria. This is a form that uses images, songs, and dialogue for storytelling. We have a long tradition of such performances in India, including the Phads of Rajasthan and the Patuas of Bengal – where the performer stands in front of the scroll and narrates the story as it unfolds on the scroll. Jana Natya Manch’s performance is based on the implementation of the new labour codes, which replace the various labour laws. Just as the new farm acts are designed to open the vast agricultural wealth of the country for corporate plunder, the labour codes also significantly weaken the ability of workers to safeguard their interests and to collectively bargain with employers.

On Safdar’s death anniversary, January 2, Jana Natya Manch organises a smaller, more intimate meeting of its members – Safdar Ki Yaad Mein, in memory of Safdar. The speakers this year were Shohini Ghosh, Purushottam Bhat, and Ditsa Bhattacharya. Shohini Ghosh, currently director of the AJK Mass Communication Research Centre, Jamia Milia Islamia, was a young undergraduate when she first met Safdar in the mid-1980s, looking for films to screen in their college film society. Safdar, who was then chief information officer of the West Bengal Information Bureau, was incredibly kind and generous. The two became friends, and later, when Shohini and others formed India’s first all-women documentary film collective, Mediastorm, Safdar wrote songs for their first two documentaries, on the Shah Banu case and the Rup Kanwar sati murder.