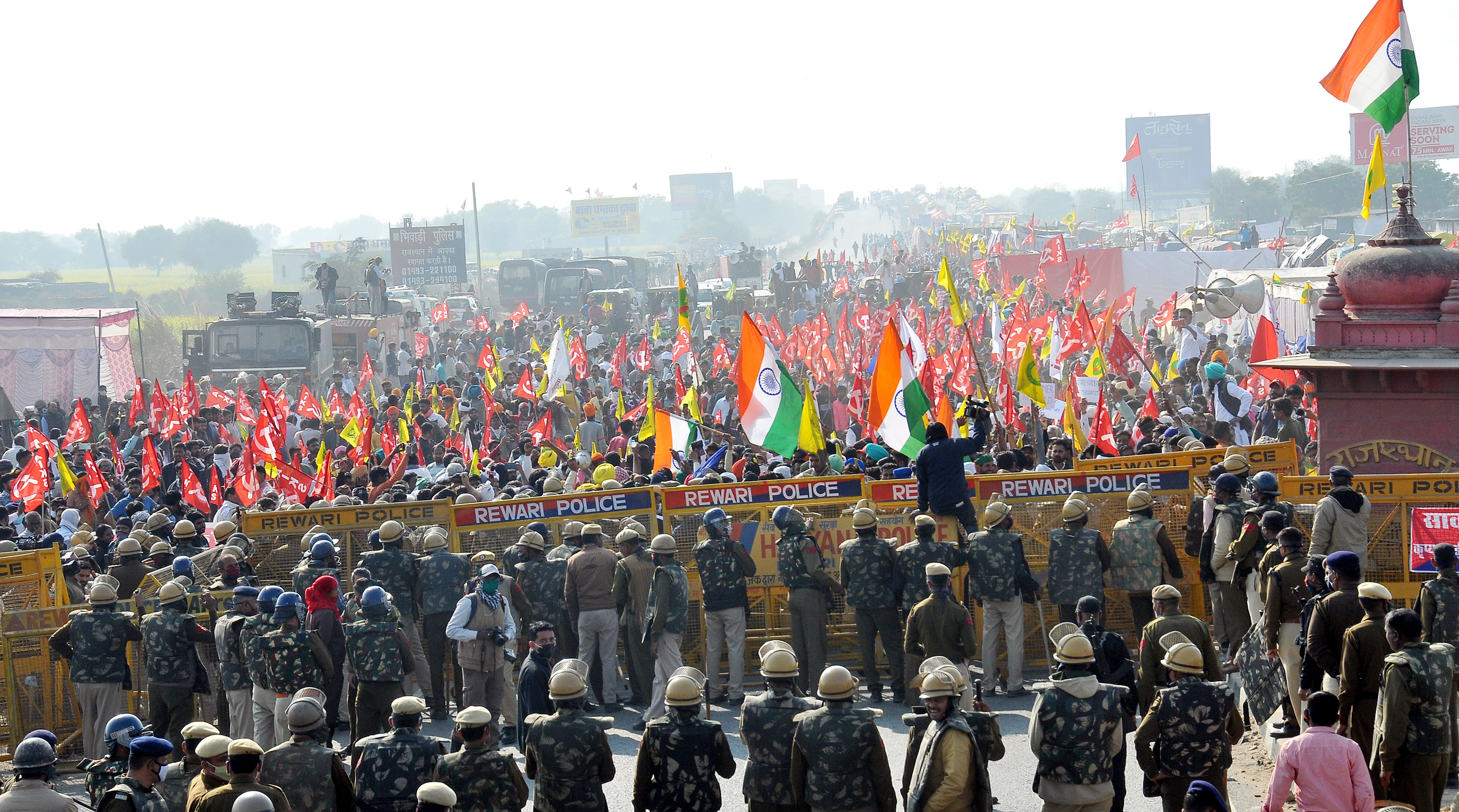 ONCE again, the talks between the central government and representatives of the kisan organisations today (December 30) failed to resolve the main issues on which these unprecedented kisan protests are taking place.  The central government refused to consider the repeal of these Agri-Laws but has apparently agreed to reconsider the Electricity (Amendment) Bill and remove kisans from the Pollution Act.  Another round of talks is scheduled for January 4, 2021.

The BJP central government’s continued obduracy regarding the repeal of the three Agri-Laws prolongs the deadlock in the ongoing huge peaceful kisan protests.

By all counts, the numbers of kisans at Delhi’s borders, on all national highways entering Delhi, are growing displaying a remarkable resoluteness and determination to achieve their demands.  Kisans have come from all neighbouring states of Delhi, including also from far-away states like Maharashtra, Gujarat, Uttarakhand etc.  In many other parts, in almost every state, the peasantry is organising continuous protest actions in all states, from Patna and Raipur to Gulbarga and Thanjavur.

This kisan struggle is admirably being supported with active solidarity by the working class and its trade union movement. All other sections of the society – women, student, youth – have also rallied in support of the kisans – the country’s annadatas.

The demands of this protest action are completely reasonable and any rational government would have accepted it.  All that is being asked from the central government is to repeal these laws now (to avoid pressures of such a possibility, amongst others, the central government cancelled the winter session of the Parliament abdicating its responsibility to be answerable and accountable) and then discuss with the farmers, the agricultural community, the corporates, all stakeholders and on that basis frame new laws and enact them in the Parliament after a structured discussion and debate.  This is what PM Modi obstinately refuses to do.

In order to discredit this massive united protest in this severe cold wave in the most peaceful and disciplined manner, the BJP and the central government led by PM Modi have embarked upon a vicious disinformation campaign. First, they were levelling the protestors as being Khalistanis, Pakistanis, Chinese agents, urban naxals, tukde tukde gang etc. Then came the calumny that it is the opposition parties who are misleading the farmers.  The fact remains that this protest is being organised and conducted by the Samyukta Kisan Morcha, a combine of more than 500 kisan organisations from all over the country with no involvement of any political party.

PM Modi is personally leading such a campaign alleging, amongst others, that the opposition parties have all spoken for agrarian reforms in their election manifesto’s but are now opposing for the sake of opposition. Yes, as far as CPI(M) is concerned, we have always sought agrarian reforms as  many other parties also did.  But what type of reforms?  The CPI(M) seeks reforms in order to strengthen India’s food security, produce enough grains to feed our people ensuring their proper nutrition and health, to provide an affordable remuneration to our farmers ensuring a reasonable price for the consumers by strengthening the public distribution system(PDS) and a further development of our agricultural sector.

PM Modi’s reforms, however, as contained in the present laws, are to handover  Indian agriculture, its markets and its produce to multinational agro-business giants, foreign and domestic corporates, severely jeopardising India’s food security; permitting large-scale hoarding of essential commodities, thus, creating artificial food shortages leading to massive price rise; dismantling of PDS and the provisioning of foodgrains at affordable prices.  These laws destroy Indian agriculture while imposing greater miseries on our people.  This is why many secular opposition parties have opposed these bills, supported and extend solidarity with the kisan protests and call upon the government to accept these demands and bring in reforms that provide prosperity and welfare for Indian people, not super-profits to foreign and domestic corporates.

The CPI(M) 2019 election manifesto contains in the section on ‘agricultural reforms’, the first point demanding the legal right to sell at MSP to all farmers.  Since at least 2017, this was being raised by the CPI(M) MPs in the Parliament, but till date, the central government has not enacted such a law.  Further, the MSP must include all agricultural crops and cover all the farmers. At present, it only covers six per cent of the farmers.  Further, an MSP without an efficient procurement mechanism is meaningless. So, the procurement system, both public and private, must be made universal all over the country.

PM Modi mounts a completely ill-informed attack against opposition state governments, particularly the LDF government in Kerala, that they are not looking after the interests of the farmers, yet opposing the central laws.  Nailing the PM’s lies regarding Kerala, the All India Kisan Sabha has effectively debunked this false propaganda.  Kerala provides handsome subsidies per hectare for paddy, vegetables, pulses, bananas etc.  Eighty two per cent of cultivated area in Kerala produces cash crops whose prices are guaranteed by commodity boards with an auction system under the state government.

In an effort to divert the country’s attention away from these massive peaceful protests, the BJP, through its state governments, is vigorously sharpening communal polarisation.  The ‘Love Jihad’ laws enacted by the Uttar Pradesh and Madhya Pradesh state governments and the `Cow Protection’ laws are being utilised to harass, intimidate and rouse communal passions. In Madhya Pradesh, in Ujjain, Indore and various other places, communal tensions are being stoked.  These will have a disastrous destabilising impact in the country.

With the global economy continuing to be in a state of recession, the neo-liberal reform trajectory has exposed itself as being totally bankrupt in offering any solution to overcome this crisis. The scrambling for predatory profit maximisation under capitalism, thus, intensifies.  The BJP central government is aggressively pursuing the neo-liberal reform trajectory to provide greater opportunities for profit maximisation by the corporates.  This requires the takeover of newer areas of economic activity and newer markets.  The current efforts for complete corporate control – both foreign and domestic – over agriculture through these Agri-Laws is aimed to achieve this objective.

The BJP central government has, thus, become the prime agent for the consolidation of the ruling classes in India and implementing reforms that serve their class interests.

In addition to the global crisis, the Indian economy was in a tailspin as a consequence of both the demonetisation and GST implementation leading to a consistent decline in the GDP growth rate over the last few years.  The Indian ruling classes were in search for further avenues to maintain and maximise their levels of profit in the background of the recession of the Indian economy, the impact of the Covid pandemic and the unplanned abrupt lockdown.

The bourgeois-landlord ruling classes in India, led by the big bourgeoisie, using the trajectory of neo-liberal economic reforms has been further consolidating its efforts for maximisation of profits.  The loot of national assets, the large-scale privatisation of the public sector, the handing over of all public wealth like mines etc., and public services to the private sector accompanied by abrogation of labour rights are a part of this process.

This ongoing historic struggle of the peasantry has sharply brought out the efforts by the leadership of the Indian ruling classes to acquire corporate control over agriculture for its profit maximisation.

A new class conflict is, thus, arising between the big bourgeoisie, in collaboration with international finance capital and the entire peasantry, including the rich peasants and landlords.

Secondly, conflicts amongst the ruling class partners are also emerging between the big bourgeoisie, on the one hand, and the non-big bourgeoisie, particularly those belonging to the MSME sector, on the other.

Thirdly, BJP’s drive to establish its complete political hegemony in the country by destroying the federal structure of our Constitution and, in its place, erect a unitary State structure is creating conflicts between the central government and elected state governments.  Some regional parties, who head state governments, who were supporters of the BJP in the Parliament and those who vacillated and remained largely neutral in their support to the BJP in the Parliament, are being forced by this hegemonic drive of the BJP to come out in opposition, particularly during this ongoing kisan struggle.

The emergence of such conflicts amongst the ruling class partners creates possibilities that must be utilised by the exploited classes, particularly the working class, poor peasantry and agricultural labour, to intensify the class battles against the bourgeois-landlord class order.

Such possibilities for advancing the class struggle have emerged with the growing coordination between the working-class trade union movement, peasantry and the agricultural labour.  Such developments began much earlier and since 2018 made significant advances through joint movements of these sections.  The November 26 all-India general strike call by the central trade unions converged with the calls by the kisan organisations on November 26-27 and the call for `Delhi Chalo’.  This growing unity in struggles will, surely, be strengthened further in the coming period.

Simultaneously, this period of intense class offensive mounted by the ruling classes along with the sharpening of communal polarisation and the undermining of the Indian Constitution is laying the ground for growing popular struggles against the policies of the present BJP central government.  Such joint united struggles as well as the struggles on independent demands of different sections of the people like women, students, youth, dalits, tribals are bound to intensify in the coming period. These must be further strengthened.  The BJP’s efforts to intensify the class offensive against the Indian people must be met and challenged by counter-class offensive by the exploited classes and sections of our people.