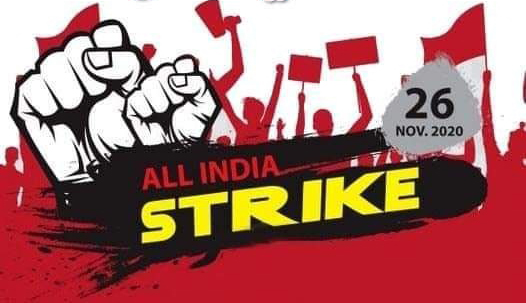 THE working class is all geared up for a massive countrywide general strike on November 26, 2020. The declaration adopted in the online joint national convention of workers has strongly condemned the BJP government’s attacks on the basic workplace, democratic and constitutional rights of the workers and the people of our country.

While focussing on the seven-point demands of the workers and the toiling people, the countrywide general strike, called by the national convention, is also against the government’s attacks on the democratic and constitutional rights.

The Modi led BJP government’s penchant for brushing aside constitutional procedures and parliamentary norms and practices is now well established. Totally disregarding the constitution, it abrogated Article 360 and 35 (A), dissolved the state of Jammu and Kashmir and divided it into two union territories. During the last monsoon session of parliament, it suspended eight MPs for exercising their right to demand division in the house and passed the three farm bills. The three labour codes were passed by parliament in the absence of the entire opposition. These are only a few examples. There are many others.

The BJP government is resorting to such violations of the constitution and parliamentary norms to achieve its twin objectives of carrying forward neoliberalism and fulfilling the RSS project of establishing ‘Hindu Rashtra’. It has the support and blessings of the big corporates, domestic as well as foreign, as it suits them well. The neoliberal agenda is for their profit maximisation and amassing of wealth, while the ‘Hindu Rashtra’ project of RSS divides society, disrupts unity and weakens united struggles against neoliberal policies through communal polarisation.

The abrogation by the BJP government, of the responsibility of the State in bringing down income inequalities, enshrined in the directive principles of our constitution, has not received due attention in general. According to Section 38 (2), ‘the State shall, in particular, strive to minimise the inequalities in income, and endeavour to eliminate inequalities in status, facilities and opportunities, not only amongst individuals but also amongst groups of people residing in different areas or engaged in different vocations’. While the government, particularly under neoliberalism, has totally withdrawn from this constitutional responsibility, ‘minimising inequalities’ is also not being raised as a prominent demand.

It is widely acknowledged that inequalities, globally as well as in our country, have been widening under the neoliberal regime. This has gained pace under the Modi led BJP regime with inequalities in the country rising to vulgar levels. Even during the lockdown, when the entire production came to a halt, GDP registered negative growth, and millions of working people lost their jobs and incomes, a few corporate cronies of this BJP government saw their incomes and wealth soar to new heights.

According to the Wealth Hurun India Rich List 2020, the wealth of Mukesh Ambani, the richest man in the country, has been growing by Rs 90 crore per hour since the March lockdown. His wealth increased by Rs 2,77,000 crores to Rs 6,58,400 crore, an increase of 73 per cent, over last year. Mukesh Ambani’s wealth is now more than the combined wealth of the next five in the list of the richest in India. Shiv Nadar, founder of HCL, is in the third place and has also increased his wealth by 37 per cent over last year. In July 2020, he stepped down and his daughter Roshni Nadar took charge as HCL chairperson. Gautam Adani and family increased their wealth by 48 per cent over last year and moved two places up to become the fourth richest in the country.

The super rich increasing their wealth even during the Covid 19 pandemic, is not a phenomenon confined to India alone.

It is reported that the richest people including Jeff Bezos of Amazon, Elon Musk of Tesla and Warren Buffett of Berkshire Hathaway increased their wealth by $845 during the first six months of the pandemic. Based on data from Forbe’s annual billionaires’ report, the Institute for Policy Studies and Americans for Tax Fairness have calculated that the total net worth of 643 richest Americans increased from $2.95 trillion to $3.8 trillion between March 18 and September 15, 2020.

According to this BJP government and its Prime Minister Modi, it is the big corporates, not the workers or other toiling people, who are ‘wealth creators’. The government has been lavishing concessions worth lakhs of crores of public money in the name of ‘incentives’ for the corporates to ‘invest’. Instead of generating demand by increasing the purchasing power of the people, the government is further transferring money into the hands of the corporates. Even when millions of workers lost their only sources of income and are starving along with their children and family members, due to the Covid 19 lockdown, the BJP government refuses to transfer Rs 7,500 per month to their accounts, as demanded by the trade unions. It refuses to distribute 10 kg free foodgrains per month to all the needy. But it announces corporate tax relief, cheap loans and other incentives to the big corporates, arguing that these concessions would generate jobs and benefit people, particularly the youth. However, this has proved to be a myth as no private corporate investment has been forthcoming in the absence of guaranteed markets.

Lack of resources is the common excuse extended by the governments, whether it is the present BJP government or the erstwhile Congress led governments, for denying the due rights to the workers and any relief to the people.

People are made to believe that the big corporates and super rich deserve incentives and concessions because they are hard working, talented, and courageous to take risks in investing and generate wealth. The workers and the poor are lazy, spendthrifts, lack talents; so the scant financial resources cannot be wasted on them.  This approach has further widened inequalities and failed to revive the economy that was deteriorating even before the Covid 19 lockdown, and worsened since.

There is growing evidence that inheritance, monopoly, crony connections, tax evasion and increasing exploitation of workers, rather than hard work, thrift, talent etc, are the major factors that contribute to amassing of wealth. It is estimated that two thirds of billionaire wealth is due to inheritance, monopoly and cronyism.

One of the factors for concentration of wealth is transfer of wealth through inheritance. The wealth, ownership and management of most of the big companies are passed on to children and other family members. More than talent or competence, it is birth that decides transfer of ownership and management. It was estimated that in less than 20 years, 500 of the world’s richest people would pass on more than $2.4 lakh crores, to their heirs.

But in India, we have neither wealth tax nor inheritance tax. Levying wealth and inheritance taxes on the super rich, would help mobilise financial resources for public spending on the basic rights and entitlements of the people.

In addition, around Rs 5 lakh crore, in income and corporate taxes have been unrealised in 2019-20. What is even more appalling is that around Rs 2 lakh crores of indirect taxes collected from the consumers in the form of GST etc, but have not been deposited to the government, is lying with the companies.

Just wealth tax and inheritance tax, levied only on the top one per cent of the population, and taking effective steps to prevent tax evasion by the big corporates will be enough to meet the basic and fundamental rights of the people. Thus, it is clear that it is not the lack of resources but the lack of political will to ensure that prevents the government from discharging its minimum responsibility towards the welfare of the people.

Governments committed to neoliberalism, dictated by international finance and designed to safeguard corporate interests cannot be expected to formulate policies for the welfare of the people, even when so directed by the constitution. Trade unions, particularly the class oriented trade unions have to expose the link between the attacks on basic rights of the workers and the people, on the democratic and constitutional rights of the people and neoliberalism.

The general strike of the workers on November 26, the countrywide protest on November 26-27 by the peasants, and the support and solidarity expressed by these two major productive forces of the country to each others’ struggles, should be the beginning of massive united struggles to defeat neoliberalism and replace it with pro-people policy regime.