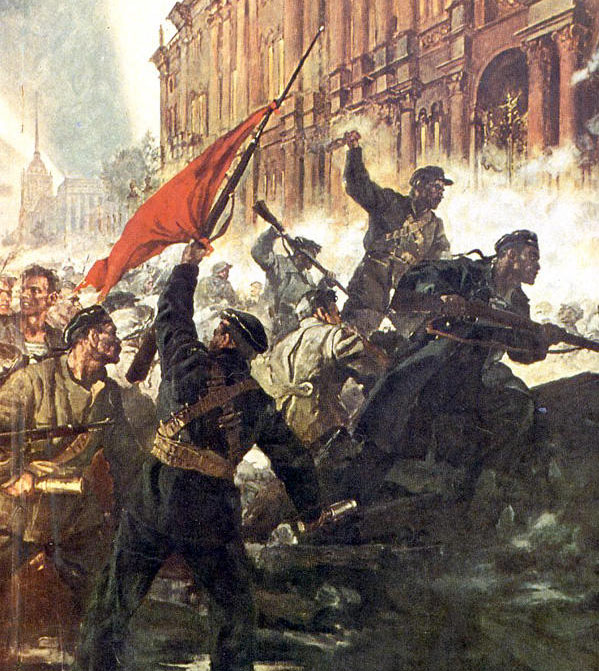 THE anniversary of the great October Socialist Revolution in 2020 comes at a time when the vast majority of the world’s people are victims of the double whammy attack on their life and livelihoods due to the raging Covid-19 pandemic, the consequent lockdowns and disruption in their day-to-day life and the deepening economic recession in the capitalist world.  In this situation, the significance of the October Revolution and the superiority of Socialism over capitalism is tellingly vindicated.

EPOCH-MAKING CONTRIBUTIONS
Over the years, we have repeatedly noted the epoch-making contributions that the October Revolution made in shaping the contours of human civilisational advance in the 20th century. Its inspiration and achievements of universal education, employment, health care and social security had galvanised the world Communist movement which led to the establishment of socialist countries and in advancing the people’s struggles for a better world. The leading role played by the Soviet Union in the Second World War leading to the defeat of fascism and Hitler liberated the world from the scourge of fascism and galvanised the process of decolonisation globally.

This, amongst others, forced many capitalist countries to adopt the ‘Welfare State’ guaranteeing a degree of social security to the people in order to stem the rising tide of people’s support that socialist ideas received.  In the sphere of scientific advances, the Soviet Union was the first to rupture the frontiers of outer space amongst many other scientific advances and achievements. Likewise, in the field of arts, its cinema revolutionised cinematography when Eisenstein introduced the technique of montage.  Above all, standing as the bulwark against imperialism and its aggressive efforts for global hegemony, Soviet Union inspired and motivated many a national liberation struggle in the world. It ensured that global peace prevailed.

With its collapse, the reasons for which we had analysed in the CPI(M)’s 14th Congress Ideological Resolution, imperialism embarked upon a naked offensive through neoliberal globalisation led by international finance capital. The consequences of this have been analysed and the manner in which this offensive must be resisted was also worked out by the Communist parties globally in their countries and by us concretely in the Indian conditions.

FACING THE COVID CHALLENGE
In stark contrast, while countries of the capitalist world are reeling under the renewed surge of the pandemic currently, with experts warning that this sudden spike in infections and deaths are only the “tip of the iceberg”, the socialist countries have been able to contain the spread of the pandemic and restart economic activity.  Till October, China reported over 85,000 cases and the death of 4,634 people.

Cuba lost 123 people due to the pandemic.  Despite the US economic blockade, the country has been able to contain the pandemic and save the lives of a large number of people.  It is now assisting over 50 countries in the world with doctors, medicines and medical equipment.

In Vietnam, so far 139 people have lost their lives and it was able to successfully contain the second wave that surged in the country.  The government of Vietnam started weekly super markets for people to shop all essential commodities for free.  It has also started rice ATMs where people can take rice free of cost.

The DPRK continues to report zero deaths in the country, despite the recent ravage by floods and storms. The huge effort for relief and rehabilitation did not see any spread of the pandemic.

The stark contrast between neoliberal capitalism and socialism is clearly established on this score, when humanity is facing trying challenges.

The World Bank describes the current global economy as undergoing the deepest recession since the Great Depression of 1929-30.

This is severely impacting on the livelihood conditions of the majority of world’s population.  According to the World Bank, by 2021, over 150 million people will be pushed into extreme poverty. Labour force participation remains well below the pre-Covid pandemic level and many more jobs are likely to be lost.  According to the ILO, the global reduction in the work hours in the second quarter of 2020 compared to the fourth quarter of 2019 was equivalent to the loss of 400 million full time jobs.  This is an alarming increase from 155 million job losses in the first quarter.

SOCIALIST CHINA
In the same second quarter (April-June) of 2020, when all the major economies in the world saw their GDP decline substantially with India registering a (-) 23.9 per cent, PRC was the only country that registered a positive growth of +3.2 per cent. In the next quarter, while the capitalist world was reeling under this recession, the Chinese economy grew at 4.9 per cent. The IMF projects that in 2020, China would have registered a 6.1 per cent real GDP growth while the major advanced capitalist economies will register a (-) 5.9 per cent real GDP growth decline.

The trajectory of neoliberalism and its economic reforms aimed singularly at maximising profits have sharply intensified exploitation of the vast majority of the people across the world.  This sharply widened economic inequalities with global billionaires fattening their profits even with the pandemic raging and economic recession deepening.  The consequence has been the sharp plummeting of purchasing power in the hands of the majority of the people leading to a massive contraction in demand. Under capitalism, if what is produced is not sold, then neither profits can be made nor growth take place.  With no growth, profits can rise only by increasing the rate of exploitation and squeezing the people. This is what has been happening globally.  Neoliberalism prevents any massive doses of hikes in public expenditures to boost employment and demand, as these are seen to adversely affect the rates of profits. Hence, the thrust of all stimulus packages has been in making available funds for private investment and not hiking public investments.  This simply cannot work for the same reason stated above because what is produced through private investment has to be sold but the markets are shrinking both globally and domestically.

Neoliberalism, thus, has no solution for this deepening economic recession. On the contrary, it further deepens it.  This is the bankruptcy of neoliberalism.

POLITICAL RIGHTWARD SHIFT
For such an increase in the squeeze of the working people to succeed, it is necessary to have political dispensations that can impose draconian, authoritarian, fascistic political orders to facilitate the intensification of exploitation.

This is required to divert the rising popular people’s protests against such intensified exploitation and imposed miseries into disruptive channels.  The recourse to emotive appeals bolsters disruptive trends like racism and xenophobia (like in the USA), religious sectarianism (like in India and Turkey etc), or, outright fascistic regimes (like in Brazil) through the spread of hatred and violence.

The current global political rightward shift is a combination of both these elements – authoritarian dictatorial regimes based on rightwing fanning of disruptive emotive appeals.

Such a political rightward shift means the unleashing of a vicious class offensive against the working people.

INSPIRATION OF OCTOBER REVOLUTION
It is in the direction to meet this offensive economically, politically and socially that the October revolution and its achievements continue to inspire the working people, the world over.  This strengthens the ongoing struggles taking place in many countries.  Neoliberal capitalism has no solution to resolve people’s miseries, on the contrary intensifies it further. Any solution can be found only outside of capitalism, i.e., Socialism.

Socialism is the Alternative!