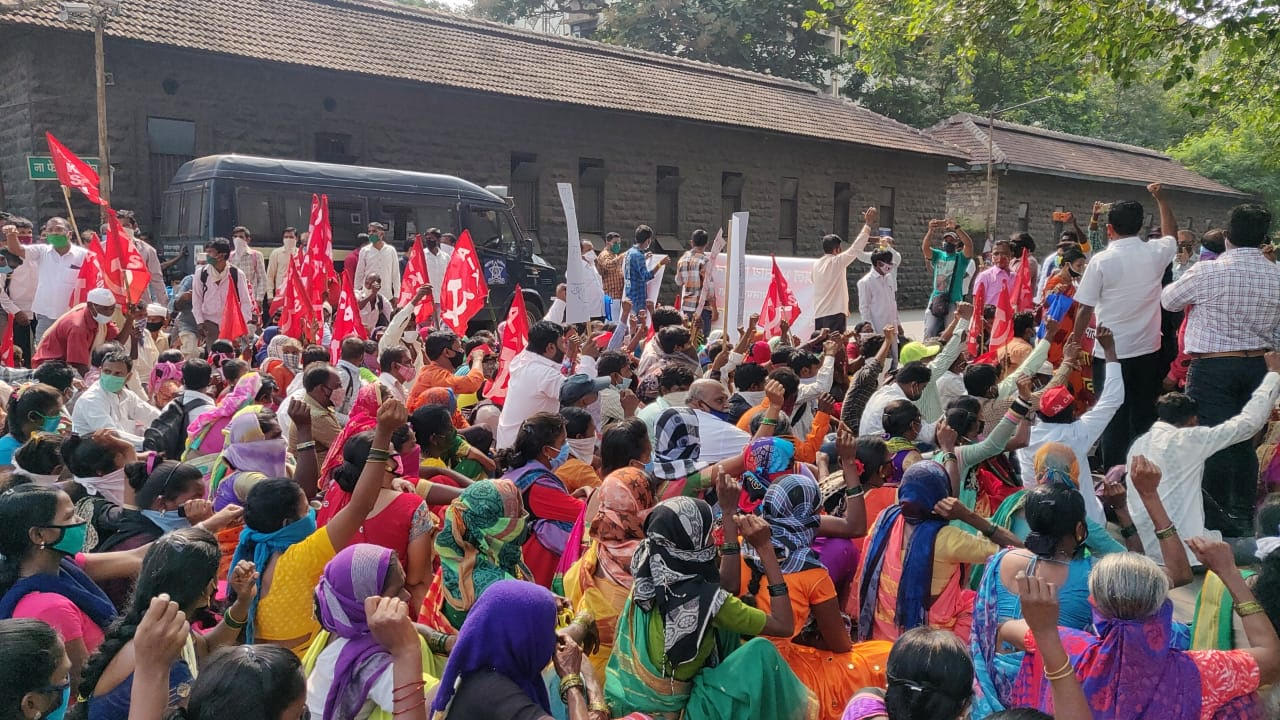 ON October 23, 2020, around one thousand adivasi peasant women and men under the AIKS banner marched to the Thane district collector's office in the heart of Thane city. They blocked the main roads outside the collector's office for an hour, to the consternation of the rattled police force. The rasta roko stir was withdrawn only when the collector met the AIKS delegation and conceded its main demands. The adivasi peasants had come from Thane city and from Shahapur tehsil in Thane district.

Four days ago, on October 19, forest department officials had, without any notice whatsoever, destroyed and looted the rice, tur and nagli crops that were ready for harvesting. The crops belonged to several adivasi peasant families who had been cultivating the land in Yeoor Hills in Thane city for the last several years.

On the other hand, the same corrupt forest officials during the last seven months of the Covid pandemic, had allowed the construction of several illegal bungalows, dhabas and lawns by fatcats in the same Yeoor Hills area. This was highlighted by sections of the media.

The heavy unseasonal rains that lashed Maharashtra in October destroyed a large part of the paddy crop in Shahapur tehsil, which already has a good AIKS unit for the last several years. The Shahapur peasants thus came not only for their own demands, but also to express solidarity with the peasants from Thane city.

A large number of women under the AIDWA banner and youth under the DYFI banner also joined this struggle of the AIKS, which was taking place in Thane city after many years.

After discussions, the district collector of Thane, Rajesh Narvekar conceded the following demands of the AIKS-led peasants:

1. Since the peasants had lost all their crops due to the attack by forest officials, they would be given adequate compensation and 10 kg of grain per head for six months on humanitarian grounds.

2. The collector would call a joint meeting of the AIKS and the forest officials as part of an inquiry into the condemnable acts of the forest department.

3. The destruction of crops due to unseasonal rains in Shahapur tehsil would be surveyed and compensation would be paid to them soon as per the state government directives.

4. Due to the severe problem of unemployment, MNREGA works would be started in a big way in Shahapur tehsil.

5. Directives would be given to the zilla parishad to include the names of the peasants from Shahapur tehsil who have been left out in the PM Gharkul (House) Scheme list.

This successful agitation was led by AIKS, AIDWA CITU, DYFI and SFI leaders.

Vinod Nikole, MLA, in his speech, declared that he would raise this callous action of the forest officials in the next session of the Maharashtra state assembly.

This AIKS mass action got good coverage in both print and electronic media.

PARTY CLASSES
Just after the 1,000-strong October 10 Martyrs Day programme in Talasari that celebrated the 75th anniversaries of the Warli Adivasi Revolt and the formation of the Maharashtra Rajya Kisan Sabha, Party classes of two days each were held in seven tehsils of Thane-Palghar district from October 12 to 18.

A total of 743 leading Party activists attended these classes, as follows: Shahapur - 212, Talasari - 133, Dahanu - 130, Vikramgad - 101, Wada - 66, Jawhar - 53, Palghar - 48. A large proportion of them were Adivasi tribals. They attended the classes despite the paddy harvesting season, aggravated by heavy unseasonal rains.

All the classes were inaugurated by CPI(M) district secretary and state secretariat member Barkya Mangat, who placed the political situation of the district and our direction of work.

The other topics taken were as follows: 1. Main strands in India's freedom struggle and the Communist Party Centenary; Party Programme; Marxist Theory of Class Struggle, Revolution and Socialism; Implementation of the Forest Rights Act along with new directives of the state government;  The current political challenges posed by neoliberal, communal and Manuwadi forces and Party Constitution, Party and Mass Organisations.

Separate meetings of the activists of the women's front and the youth front were held in each class and they were attended by their respective leaders.