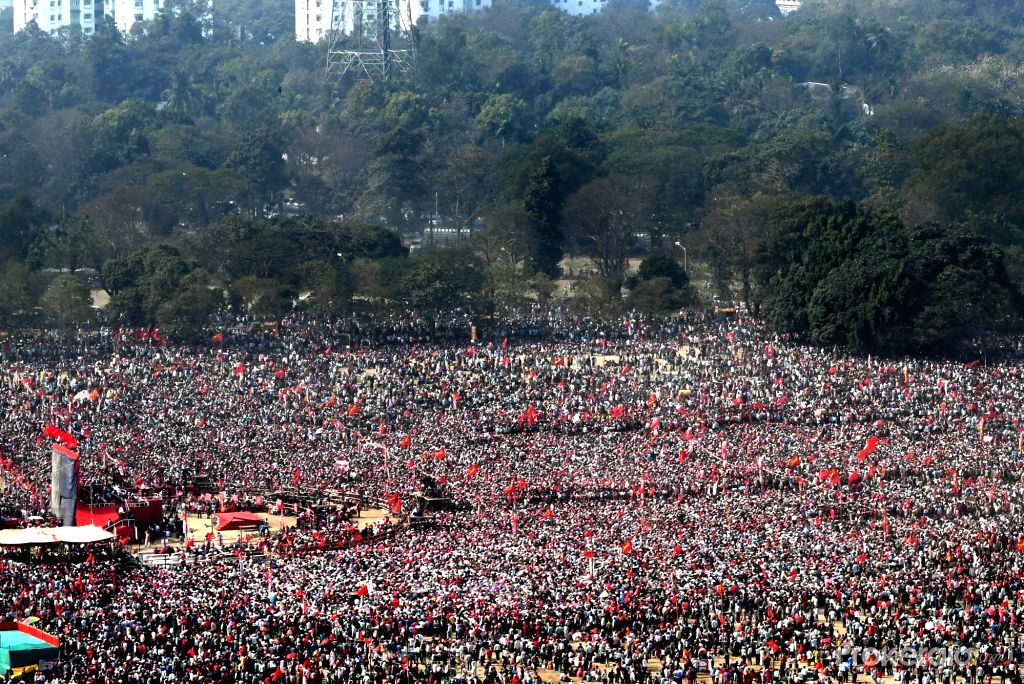 A Century of Struggle and Sacrifice

OCTOBER 17, 2020 is a historic day as it marks the hundred years of the formation of the first unit of the Communist Party of India in Tashkent in the then Soviet Union.

A century of the Communist movement has passed spanning eight decades of the 20th century and two of the 21st century. The birth and development of the Communist Party is intertwined with the freedom struggle in India. The best and most militant fighters belonging to various streams of the independence movement joined the Communist Party because of its staunch anti-imperialist role. Faced with severe repression from the outset, Communists in thousands spent years in jails and many were martyred in the anti-feudal and anti-imperialist struggles, particularly during the post-war upsurge (1945-47).

An indication of the scale of repression and sacrifice made by the Communists of that time can be glimpsed by the fact that the 138 delegates, who attended the First Party Congress in Bombay in 1943, had spent a total of 414 years in jail.

The Communists believed that purna swaraj would have meaning only if workers and peasants were economically and socially emancipated.  The Communists played an important role in organising the working class through trade unions and the peasantry through kisan sabhas to draw them into the national movement.

After independence, the new ruling class – the bourgeois-landlord alliance – turned their backs on the completion of the task of the democratic revolution. The bourgeois-landlord alliance led by the big bourgeoisie utilised the State power to embark on the capitalist path of development – a path which entailed compromise with landlordism and failure to unshackle the peasantry from archaic land relations and imposing capitalist exploitation on them.  The policies pursued were skewed in favour of the big monopoly houses and the rural rich.

The Communist Party took up the task of democratising agrarian relations by fighting for land reforms and to realise the slogan of `land to the tiller’. It is these struggles which led to the first Communist ministry in Kerala and subsequently Left-led governments in West Bengal and Tripura to implement land reforms. It is the Communist Party which brought land reforms to the centre-stage of Indian politics in the early decades after independence.

The other major struggle in which the Communists played a leading role was the movement for linguistic reorganisation of states. Even before independence, the Communists had set out the plan for a federal set-up of an Indian Union comprising states based on the linguistic principle.

The Communists emerged as the most consistent defenders of secularism and democracy in the political system.  While secularism was interpreted by the Congress and other secular bourgeois parties as equality of all religions and their equal right to interfere in matters of State and politics, the Communists unwaveringly stood for separation of religion from State and politics. The commitment to secularism of the Communists was testified by the role of the Left-led governments in West Bengal, Kerala and Tripura at different points of time.  The record of the Left Front government of West Bengal for 34 years was exemplary in this respect.  As the Hindutva forces rose in the decade of the 1990s, only the Communists and Left parties were firm about countering the communal forces without compromising on issues such as the Ayodhya dispute.

The Communist movement has constantly striven to widen and deepen democracy in the country. The ruling classes have always sought to restrict democracy and the Constitutional rights of citizens.  From the outset, the Communists had opposed the preventive detention laws; the Communists have sought to defend democratic rights and civil liberties at every turn. The CPI(M) opposed the emergency and many of its cadres were jailed.

The whole paradigm of capitalist development changed after the ruling classes adopted neoliberal policies three decades ago.  The Congress, BJP and all other bourgeois parties embraced the neoliberal approach. However, the Communists have consistently opposed the neoliberal policies and the pro-imperialist shift that occurred as part of this change. The Communists, working in the class and mass organisations, have been playing a leading role in mobilising resistance to these policies. Communists have worked for building the widest working class unity to fight back the neoliberal offensive. The united working class movement conducted 19 general strikes against various aspects of the neoliberal regime in the past three decades. The twentieth, one-day general strike is to be held on this November 26.

The hostility of the ruling classes to the Communists and Left movement resulted in continuous attacks on the cadres and activists of the Left movement.  The period of semi-fascist terror in West Bengal in 1970s and subsequently in Tripura a decade later was an outcome of the intensification of the class struggle. In both the states, anti-Communist terror and violence have recurred again.  In Kerala too, hundreds of cadres of the CPI(M) were killed over the years by the ruling class forces, including the RSS.

The congruent development of neoliberalism and the Hindutva forces have posed a serious challenge for the Communist movement and all the Left and democratic forces. Neoliberal capitalism has brought many changes in the structure and composition of classes, some of which have had an adverse effect on the development of the working class and peasant movements.  Rampant privatisation in all spheres has had its impact on the intermediate classes.  The Left-led state governments in this period have also faced serious constraints and limitations in implementing alternative policies. The CPI(M) and the Left forces have been grappling with these issues and formulating new tactical approaches and slogans.

There was a qualitative change with the assumption of power by the Modi government in 2014.  For the first time, a Party based on the Hindutva ideology and controlled by the fascistic RSS has been wielding State power for the past six years.  The disastrous consequences for secularism, democracy and the well-being of the working people have been unfolding. A political force which had no role in the freedom struggle nor sharing its anti-imperialist secular ethos is now engaged in subverting the Constitution and instituting authoritarian rule – all in the name of a nationalism which is regressive and reactionary.

The challenge is to counter this pseudo-nationalism with an anti-imperialist, secular and inclusive nationalism. The Communists are best equipped to do so because they carry forward the legacy of the anti-imperialist struggle for independence. Building unity of all Communist and left forces is crucial at this juncture to rally other democratic and secular forces.

Marxism-Leninism has been the ideological bedrock of the Communist movement in India. The formation of the CPI(M) in 1964 was a result of a prolonged struggle against revisionism.  Soon after its inception, the Party had to fight against Left adventurism too.  Applying Marxism-Leninism to the concrete conditions of Indian society, the CPI(M) set out a Programme, which aims to achieve a people’s democracy that can facilitate the path to socialism. It is equipped with this scientific theory and practice that the revolutionary movement in India can advance towards building a society free from class exploitation and social oppression.