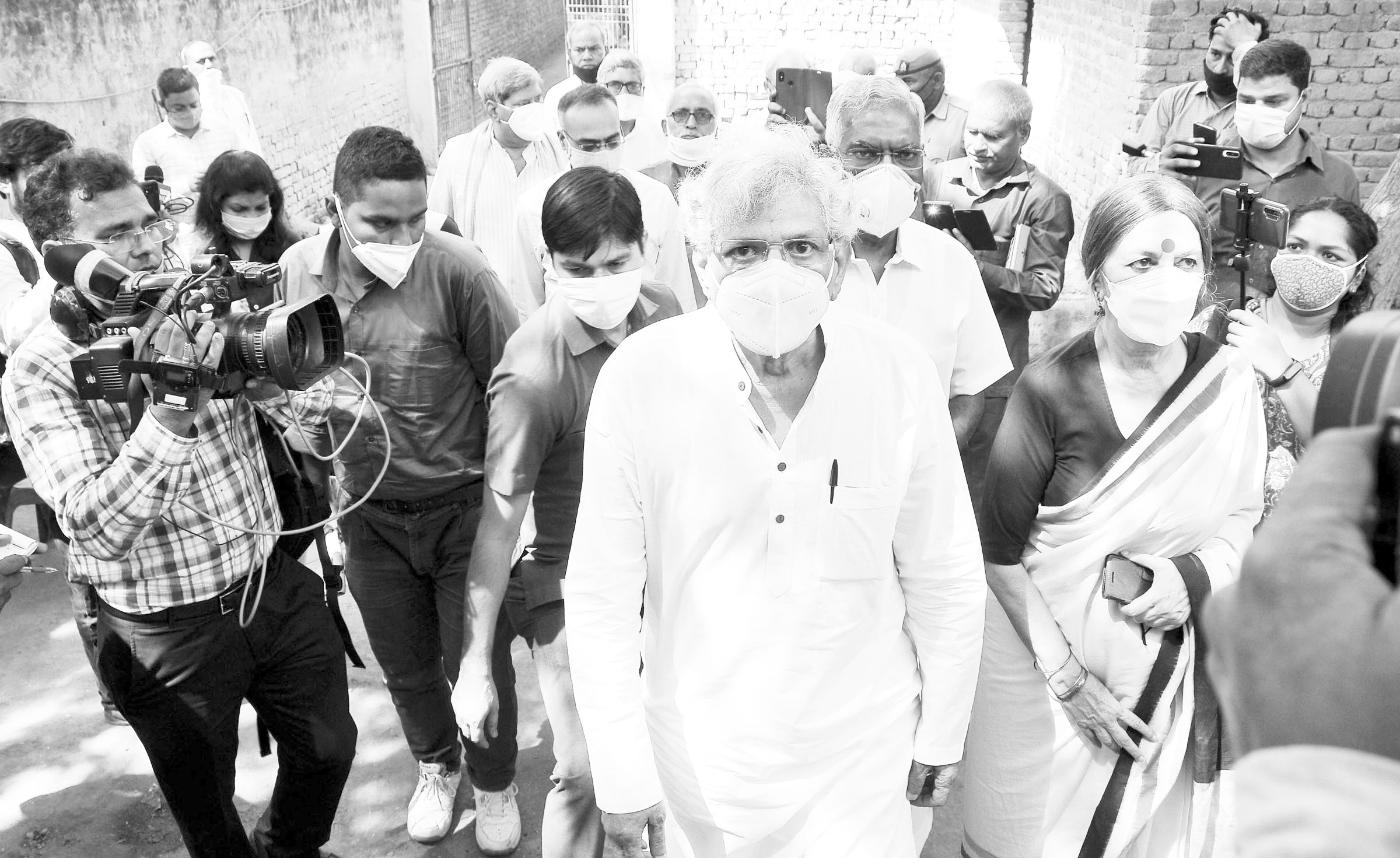 The delegation met the family members of the victim who shared details of the incident and the obstacles posed by the administration. They were living in an atmosphere of constant fear due to the pressure exerted by the administration and the threats they are receiving. After interacting with the family members, the delegation addressed the media.

The delegation demanded the state administration to ensure that justice is done to the victim’s family and not divert the issue by making baseless allegations. They demanded a court monitored probe. They criticised the attitude of the local police who wasted precious time in filing an FIR against the accused and also in ensuring the victim got immediate medical attention. The entire incident gives rise to apprehensions about the commitment of the local police to ensure justice and to see that the culprits are punished.

The statements given by the additional director general (ADG) of UP police denying rape, is nothing but an attempt to weaken the case and this in fact shows the ignorance of the concerned officer of the laws of the land. The delegation condemned the act of the administration which had rushed in to cremate the body of the victim, without the presence of the family members. This only goes to show that the administration is either trying to hide something or save someone.

The leaders of the CPI(M) and CPI promised the family that they will continue to mobilise people and organise struggles till justice is done. Mentioning the various protest demonstrations that took place throughout the country as an example of the entire country standing with the family, they vowed to stand with the family in this struggle for justice.

Sitaram Yechury rubbished the efforts of the state government to cover up its failures by floating conspiracy theories. He questioned, if sexual harassment and death of the victim is a fact, then what the state government is doing to ensure that the culprits are punished. Instead of floating these obnoxious theories, it is better for the government to perform its constitutional duties, he commented. If indeed there is a conspiracy, the government is free to investigate and nobody is stopping it, but it is completely wrong to use it to as an excuse to weaken the present case and ensure that the culprits go unpunished, he observed.

Brinda Karat questioned the need for the repeated questioning of the family members by the SIT officials, when the state government had declared that it is asking the CBI to investigate the case. This appears to be part of the intimidation tactics of the administration. In this atmosphere, it is natural that the question of security for the victim’s family arises, she observed. It is the duty of the government that proper security is provided to the family members and ensure that they are not threatened by anyone, particularly those holding public offices.

The leaders of the delegation reiterated their demand for a time-bound, court monitored investigation into the entire case. They criticised the state government’s decision to conduct narco analysis test on the family members of the victim, stating that this is totally unheard of and only shows the insensitive and biased attitude of the UP police and the state government. They demanded that along with the culprits who had committed the heinous crime, action should be taken on the local police officers who acted insensitively, delayed filing of FIR and failed in ensuring timely medical assistance to the victim. In the background of the statement made by the ADG of UP police, there is an urgent need to educate the police force about the laws of the land concerning rape and the procedure to deal with victims of sexual assault and sensitise the personnel, they added.

A delegation of Centre of Indian Trade Unions (CITU), All India Kisan Sabha (AIKS), All India Agricultural Workers Union ( AIAWU) and All India Democratic Women’s Association (AIDWA) visited Gulgarhi village in Hathras, UP on October 4, and extended solidarity with the family of the dalit girl who was brutally gangraped and killed by upper caste landlord men. It is with great difficulty the delegation was allowed by the police to go the house of the victim. The village is still cordoned and their neighbors are terrorized. The delegation had to wait for three hours to meet the family.

Members of the delegation conveyed their condolences to her parents and other members of the family. The inconsolable family members shocked by the barbaric incident held the BJP government responsible for their daughter's death. The mother of the girl narrated how, the police in an inhuman way have cremated her child without allowing her to even have a look. She also said that her daughter has named the culprits before her death. The police intimidation at each step also was questioned. The father in law of the brother of the girl was manhandled by the officials. The girl's father told the team that they do not have faith in the BJP state government or in the CBI enquiry announced by them. The family wanted a judicial enquiry supervised by the Supreme Court. The team supported the demand and assured all support for the same including legal support as may be required.

COUNTRYWIDE SPONTANEOUS
PROTESTS
Spontaneous protests erupted in almost all the corners of the country. Organisations of (except those aligned to the RSS/ Sangh Parivar) dalits, workers, Left students, youth and women hit the streets against the gruesome rape and murder and the role of the state government. The opposition leaders who tried to visit Hathras were not allowed initially and were heckled badly by the UP police. Kerala chief minister, Pinarayi Vijayan condemned such attacks on the opposition leaders.

In Delhi, protests were held on October 2 at Jantar Mantar, in which leaders of the Left parties participated. Sitaram Yechury and Brinda Karat spoke in the protest meeting. Thousands of people had gathered to register their protest.

Massive protests were held in Kerala on Gandhi Jayanti day, October 2. These protests were held throughout the state. The speakers in these protests criticised the UP government for a completely apathetic attitude towards the victim by burning the body in the middle of the night after locking up the family. This is beyond condemnation, they remarked.

Big protest rallies were held in West Bengal condemning the barbarity perpetrated in Hathras. Rallies were organised almost in all towns and blocks in the state. Left and Congress-affiliated mass organisations took out a procession in Kolkata. Police tried to block the rally and a scuffle ensued. The protestors blocked the road and effigies were burnt. Some protestors, including AIDWA leaders, suffered injuries. A huge rally turned into a human stream in Siliguri. Thousands of people participated in the rally. Left student organisations demonstrated in different parts of the state, took out torch rallies.  On October 6, Left parties and Congress took out joint rallies throughout the state. In Kolkata, Biman Basu, Md Salim participated in the rally. Surya Misra walked in the procession in Siliguri.

The rallies raised voice against the UP government’s attitude towards the Hathras incident, as well as rape incidents in West Bengal. There had been consecutive cases of rape and consequent deaths in the state. Recently, a tribal teenager took her own life after being raped by a group in Rajganj in Jalpaiguri . The accused are TMC activists. Two deaths occurred in West Midnapore district. Hathras incident itself is reminiscent of Madhyamgram rape and murder case in 2013. While the chief minister criticises UP government, she is silent about incidents in the state. Protest rallies raised voice against “Woman-killer Yogi-Mamata raj”.

In Hanumangarh in Rajasthan, CPI(M) activists held a strong protest demonstration demanding justice for Hathras victim. This protest was held on October 3.

On October 2, in UP there were massive protest demonstrations held in different parts of the state. These protests were jointly held by Left parties. The state government tried its best to stop the protesters from holding protest but could not stop them. In Lucknow, the Left party leaders were arrested as they were proceeding towards the Gandhi statue. However, protests could be held in Varanasi, Itawa, Jaunpur, Mirjapur, Balia, Devaria, Allahabad, Basti, Aligarh, Mathura, Mau, Jalaun and in some of the divisional headquarters.

Protests were held in Gwalior on October 2, in Madhya Pradesh and in other centres against the Hathras incident. A procession was also taken out in the town by the CPI(M).

In Tamil Nadu, in most of the districts, protests were held on October 2, condemning the Hathras incident and the role of the BJP government in UP. K Balakrishnan, state secretary of the CPI(M) led the protest demonstration in Chennai. P Sampath, Central Committee member and A Bakkiam, district secretary  were also present.

Various organisations comprising Dalit Adhikar Manch (DAM), Janwadi Mahila Samiti, CITU, Municipal Employees Union, SFI, DYFI held protest demonstrations in Haryana on October 2. The speakers castigated the UP government for adopting the RSS’s manuwadi agenda which is opposite to the basic framework of the Indian constitution. In Rohtak, protests were jointly held by AIDWA, DAM and CITU on October 1. Later in the evening, a torch march was also held.

On October 1, there were protests held jointly by various mass organisations in Himachal Pradesh. These organisations include AIDWA, Dalit Shoshan Mukti Manch, DYFI and SFI. These protests were held in Shimla, Rampur, Jogendernagar, Kullu and Mandi. Later memorandum was also submitted in respective places to the district/ subdivision administration.

Trade union organizations affiliated with CITU held protest demonstration in Srinagar on October 4. Carrying placards and banners, the protesters raised slogans against the perpetrators of this heinous crime. They said the burial of the gang-rape victim in Hathras without her family's consent was a blatant denial of justice.

On September 30, a spontaneous protest was held outside the UP Bhavan in Delhi. This protest was held by various organisations that include: AIDWA, NFIW, AIMSS, SFI, AISF, AIDSO, DYFI, AIYF, AIDYA and Anhad. Later the protesters were arrested. Mariam Dhawale, general secretary of AIDWA was also present in this protest.