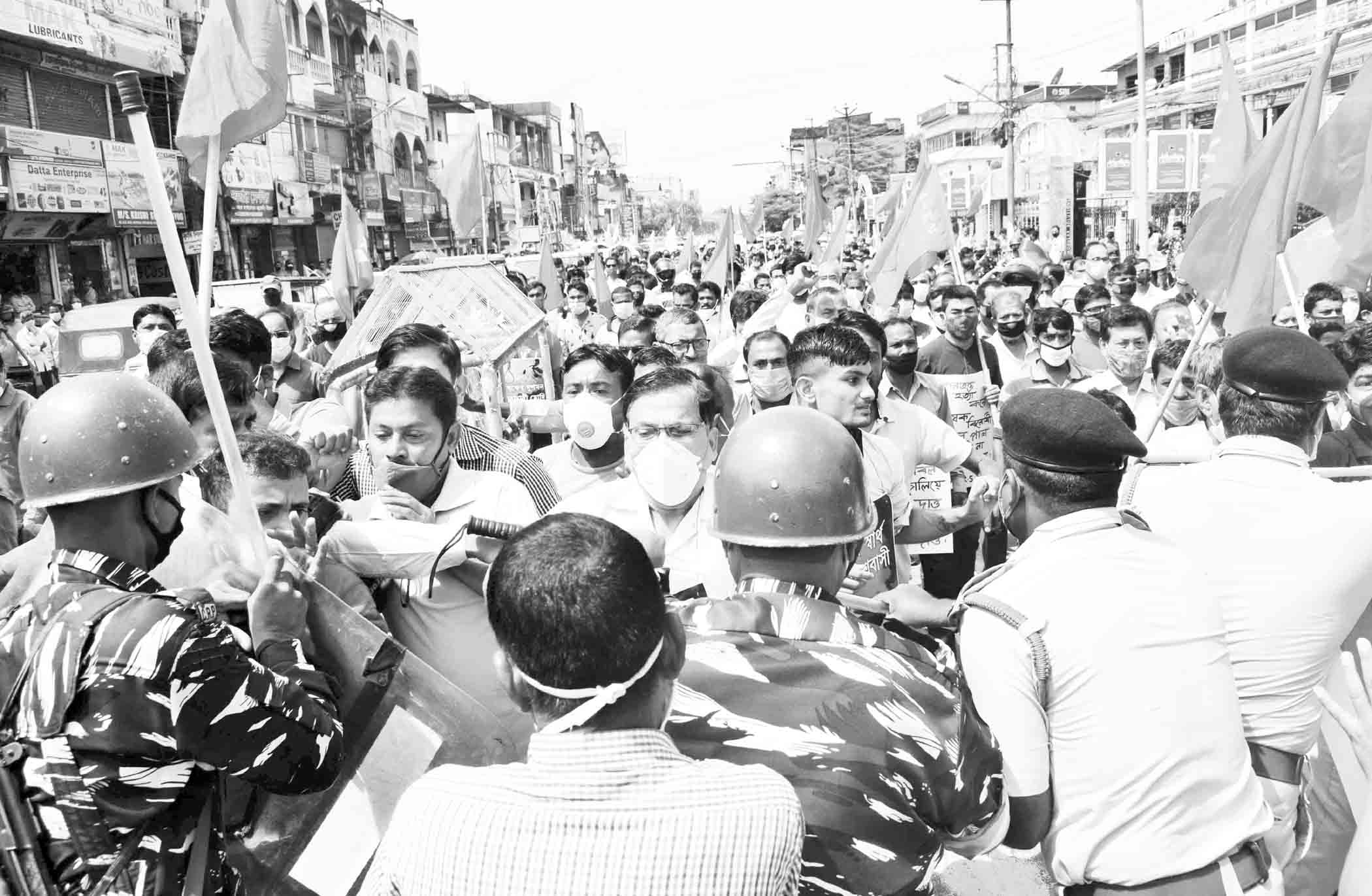 Protests across the Country against Farm Bills

KARNATAKA
OVERWHELMING response across the state was witnessed to the ‘Karnataka bandh’ call given by kisan organisations on September 28, against anti-workers and three anti-farmers bills (already issued as ordinances).  It was also against three agriculture-related anti-farmer anti-people bills passed recently by the Parliament. Bandh was marked by dharnas, processions, burning of effigies of Modi-Shah and highway blockades. Slogans were raised against anti-farmer and anti-worker policies of state and central governments. The bandh evoked very good response in most districts in Southern Karnataka and Hyderabad Karnataka. Relatively, bandh evoked moderate response in districts of coastal and Bombay Karnataka. However, most districts and taluk centres saw dharnas, processions and protest rallies. In many centres autorickshaw, taxis and public transport were off road. Even where public transport was available there were few takers. In many district and taluk centres traders closed their shops. Bangalore saw militant massive demonstrations in Corporation Circle, Mysore Bank Circle and several other places. Huge procession was taken out from Corporation Circle.   Considering the constraints due to Covid situation, it was the biggest mass mobilisation and outburst of anger against state/central governments.

The bandh was part of a series of protest actions chalked out by AIKCC Karnataka unit consisting of many farmers organisations including KPRS (AIKS state unit), KRRS, Hasiru Sene, Asha, RKS, KJS etc. It started on September 21 the day state legislature was to begin session which included in its agenda passing of three anti-farmer bills and an anti-worker bill. It started with Vidhan Soudha Chalo on September 21 where thousands of peasants participated. Also ‘peoples session’ (parallel to that of state legislature) was held every day. This culminated with a bandh call for September 28. The whole programme including bandh was supported by several trade unions, student/youth/women organisations, pro-Kannada organisations.  Congress, JD(S), Left Parties supported the bandh. The support for bandh clearly unnerved the state government and on the eve of the bandh the chief minister called peasant organisations for a meeting. However, the  peasant organisations did not agree to call-off the bandh, short of withdrawing of bills.

Here it may be noted that although the bills were passed in legislative assembly, they got stuck in the legislative council.  Anti-worker Industrial Disputes and Certain Other Laws(Karnataka Amendment) Bill,2020 was defeated in legislative council where Congress-JD(S) are in a majority. The council was adjourned sine die in the midst of the discussion on the Karnataka Land Reforms (Second) Amendment Bill, 2020, without passing it. The Karnataka Agriculture Produce Marketing (Regulation and Development) (Amendment) Bill, 2020, was not taken up for discussion. It may also be noted that Congress-JD(S) concerted action in the legislative council to oppose anti-farmer anti-workers bills was also due to the pressure created by  mass mobilisation on the ground culminating in a bandh. Seeing the response, the chief minister had to call a press conference and state that ‘farmers are being misled by propaganda of Congress and other opposition parties’.  After the debacle in the council, the CM on the one hand indicated that he will be forced to issue ordinances again, and on the other, he is open to suggestions from farmers organisations.

ON September 25, 35,360 peasants at 83 centres in 23 districts of Maharashtra, led by the AIKS, responded to the AIKSCC’s nationwide call, blocked national and state highways in Maharashtra and held demonstrations in which they burnt copies of the three anti-farmer and pro-corporate agricultural bills of the Modi-led BJP government. In some districts, they included a large number of women and youth led by AIDWA and DYFI. These were the largest mass actions in Maharashtra ever since the lockdown began six months ago.

There were massive rasta roko actions in Thane-Palghar, Nashik and Ahmednagar districts, in which a total of over 25,000 peasants participated in strength.

Solidarity actions by CITU, DYFI and AIDWA were held in four centres in Mumbai and they mobilised around 300 people.

Apart from the AIKS, other constituent organisations of the AIKSCC, like the CPI-led Kisan Sabha, Swabhimani Shetkari Sanghatana, National Alliance of People’s Movements, Lok Sangharsh Morcha and others also held protests in several places in Maharashtra.

These mass actions were led in various places by AIKS leaders. CITU, AIAWU, AIDWA, DYFI and SFI leaders also participated in some places. These actions received good publicity in both mainstream media and also on social media.

IN response to the joint call of the kisan organisations of the country, the peasant masses of Tripura staged huge demonstrations in the state on September 25, 2020 protesting against anti-peasant bills which are termed as a death-knell for Indian peasants. The anti-farm bill movement was sponsored by AIKS, AIAWU and GMP and other Left kisan organisations  and it had fraternal support from the working class, students, youth and women organisations. This movement of the peasants also had to confront stiff resistance from the ruling BJP miscreants and the police. Altogether in 47 places, the peasant masses staged protest demonstration against the draconian farm bill defying the hostility from the police and ruling party miscreants.

In Agartala, violating the prohibition declared by the police, kisan leaders and the peasants gathered in HGB Road . Besides the peasants, people from various other trades also joined in this protest programme. Initially there was scuffle with the police to join into the mobilisation. But witnessing the high temperament of the participants the police did physically oppose the programme. The long procession marched through the main road of Agartala town chanting slogans against anti-peasants bills passed in the parliament by the Modi government. The procession was led by state AIKS state secretary, Narayan Kar, kisan leaders, Badal Chowdhury and Pabitra Kar,  GMP leader, Jitendra Chowdhury and leaders of other Left kisan organisations.

Briefing to the press, the kisan leaders said, if the bill is not rolled back, bigger movements will be held in coming days. It is absurd that, the peasants will have no guarantee of MSP, no subsidised fertilizer and agri-inputs etc. The market of the agri-produce will be under the control of the corporates. The corporates are not charitable organisations, rather they know nothing but super-profit. The farm bills have paved the way to make super profit of the corporates at the cost of lives of innumerable peasants who are already pauperised under the yoke of neo-liberal economic policy.  (Haripada Das)

ON the national call of the AIKS, the Himachal Kisan Sabha(HKS) held protest demonstrations in different parts of the state on September 25. These protests were held in Shimla, Theog, Rampur in Shimla district; Nirmand, Anni and Kullu in Kullu district, Bhabanagar in Kinnaur district, Mamlig in Solan district, Nahan in Sirmour district, Jogendernagar, Balh, Dharampur in Mandi district; Chamba; Hamirpur; Una and in a few other tehsil headquarters.

The Shimla protest demonstration was addressed by Onkar Shad, state general secretary of the HKS and Kuldeep Tanwar, president. The speakers lambasted at the central government for passing the three bills which they termed are anti farmer and serve the interests of big corporate especially in buying. While explaining the role of the APMC in providing stability in market prices for the purchase of apple crop, Onkar Shad said once the market intervention is over this will ruin the farmers of the state and the apple growers will be the hardest hit. The big corporate like Adani etc., who are already in the procurement business in Himachal buy only A grade apple which is not even 15 per cent of the total produce.

THE bandh call given by the farmers across the state on September 25, evoked a good response, even sections of traders and other civil society groups supported the bandh call.

The speakers lambasted at the central government for working against the interests of the farmers and workers of the country. Even the parliamentary procedures have been kept at bay, they pointed out.

The Kisan Sabha has congratulated the farmers and the general public for such an overwhelming response to the strike call. The state coordination committee of kisans has appealed the political parties that support the farmer's agitation to continue their support as in the days to come this movement is bound to grow more.

In the protest demonstrations, apart from the AIKS, other mass and class organisations of the people participated.