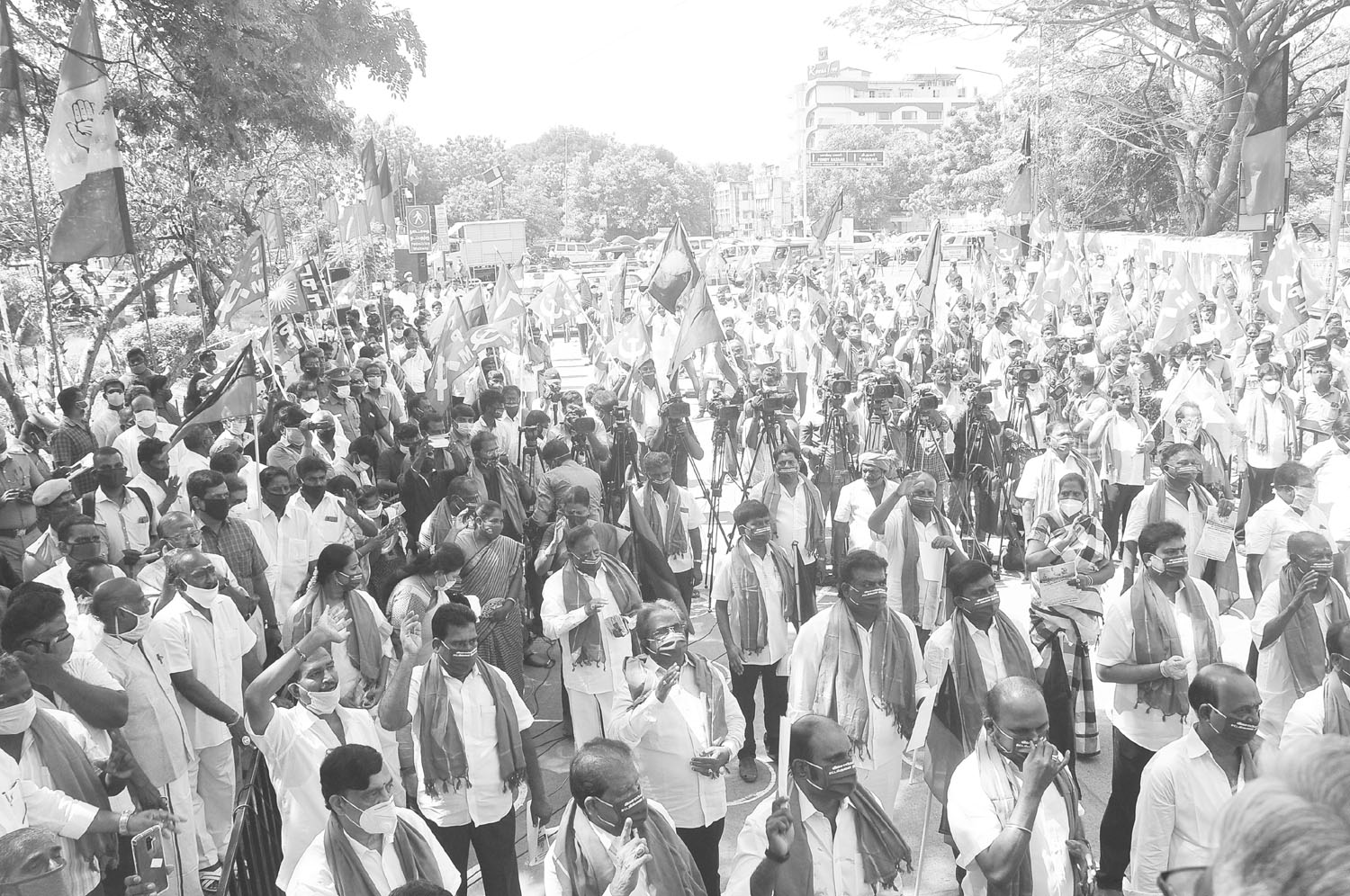 ON the call of the Polit Bureau of the CPI(M), national-level protest week was observed in the country from September 17-22. Below we publish reports received from the states.

Tripura
THE people of Tripura have exerted their might to resist all obstacles to make the movement on the five-point charter of demands successful that was called by CPI(M) Polit Bureau on September 17-22.

On September 22, the day of statewide protest demonstrations, it was incessant rain from the morning. On the other hand, the ruling party and the BJP-led government left no stone unturned to throttle the programme. Even from the previous day, the BJP terror-brigade started threatening party workers, and the common supporters not to take part in the programme. The police and TSR forces had taken a position in front of most of the party offices. But the people whose back have been stuck to the wall spontaneously attended in these demonstrations in a massive way to voice their anguish due to unheard of sufferance they are passing through for want of work and food during the lockdown and Covid pandemic restrictions.

Every participant had hand-written placard showing demands and was displayed on their body. In many places, the number could not be confined to 100 due to the spontaneous participation of the people in a larger number. In tribal areas defying threats from the IPFT sectarian forces, men and women determinedly came to the street to voice their anger against prevailing economic hardship. In many places, the demonstrators made the programme success defying threats of ruling BJP miscreants in one hand and obstacle of the police on the other. The BJP miscreants inflicted injuries to many party workers and supporter on their way to the programme and during their way back.  In some places, the slogan-chanting the procession had to scuffle aside the police to move forward. In Kailashahar and Ambassa, the police declared the arrest of the demonstrators. In two places, the BJP miscreants took hold of the selected places beforehand in the name of ‘Swach Bharat Abhiyan’. In some places, the programmes were abandoned due to torrential rain.  Braving red eyes from police and natural adversities, demonstrations could be held at 76 places out of 110 places selected and altogether about 12,000 people attended throughout the state. In Gandachhara, the party leaders postponed the programme to avoid a serious clash with BJP’s rowdies.

In Agartala town, there were protest demonstrations in five places where Polit Bureau member, Manik Sarkar, Central Committee members, Agartala based state committee members, district committee members were present in separate places. Similarly, in sub-divisions, district and sub-divisional committee members led the demonstrations. In most of the places, party leaders addressed the gathering. In one of the protest places in Agartala, Gautam Das, the state secretary said, we have raised these demands much earlier, so that the poor people may survive.  But instead of conceding these demands, the governments both at the centre and in the state are adamant to suppress the voice of protest. They are snatching away the democratic rights, trade union rights to stifle the protest. The oppositions are denied to speak even in the Parliament and assemblies.  The government is serving a handful of corporate at the cost pauperising the millions.  This is authoritarianism which we must defeat with the united movement of all sections of people, Gautam Das concluded.

Jitendra Chowdhury in his address in another place in Agartala highlighted the appalling state situation in all sectors. The people of Tripura are being lynched in two ways, one, mismanagement of Covid pandemic  for which we are losing many valuable lives and the other, economic crisis of the people for want of food and work resulting in many starvation deaths, particularly in tribal areas. By suppressing the opposition voice, this fact cannot be buried, Jitendra Chowdhury said. (Haripada Das)

Tamil Nadu
THE CPI(M) Polit Bureau called upon its units across the country to observe a national level protest programme from September 17 to 22, 2020 when the parliament is in session. It has been decided that this protest will highlight the anti-people policies of the Modi government and will raise four demands for its immediate implementation.

On this basis, the CPI(M) Tamil Nadu state committee made elaborate arrangements to conduct the protest programme effectively across the state from September 17-22. All the mass organisations were also involved in this programme where thousands of cadres raised their voices denouncing the anti-people policies of  Modi government and highlighted the demands like cash transfer of Rs 7,500 per month for the next six months to all families outside the income tax bracket, distribution of free food grains of 10 kg per individual per month for the next six months, expansion of MGNREGA to a minimum of 200 days of work a year with enhanced wages, unemployment allowance to all the unemployed and to safeguard the Indian Constitution and its fundamental guarantees of liberty, equality and fraternity for all our citizens.

Consequently, as the Modi government took an autocratic step to pass three farm bills in the Parliament despite stout opposition from almost all the opposition parties as well as its own ally Akali Dal, in Tamil Nadu, the DMK led Democratic Progressive Front(DPF) leaders met and decided to conduct an all party protest programme on September 28, 2020 across the state denouncing the passage of three farm bills. CPI(M) and other constituents of this DPF were requested to conduct the programme effectively on this issue which will otherwise will sound a death knell of Indian peasantry. Accordingly, protest programmes were conducted across the state and all the state leaders of CPI(M) and thousands of cadres from the Party and mass organisations joined these protests and raised slogans against the anti-people policies of the Modi government. V  B Ganesan