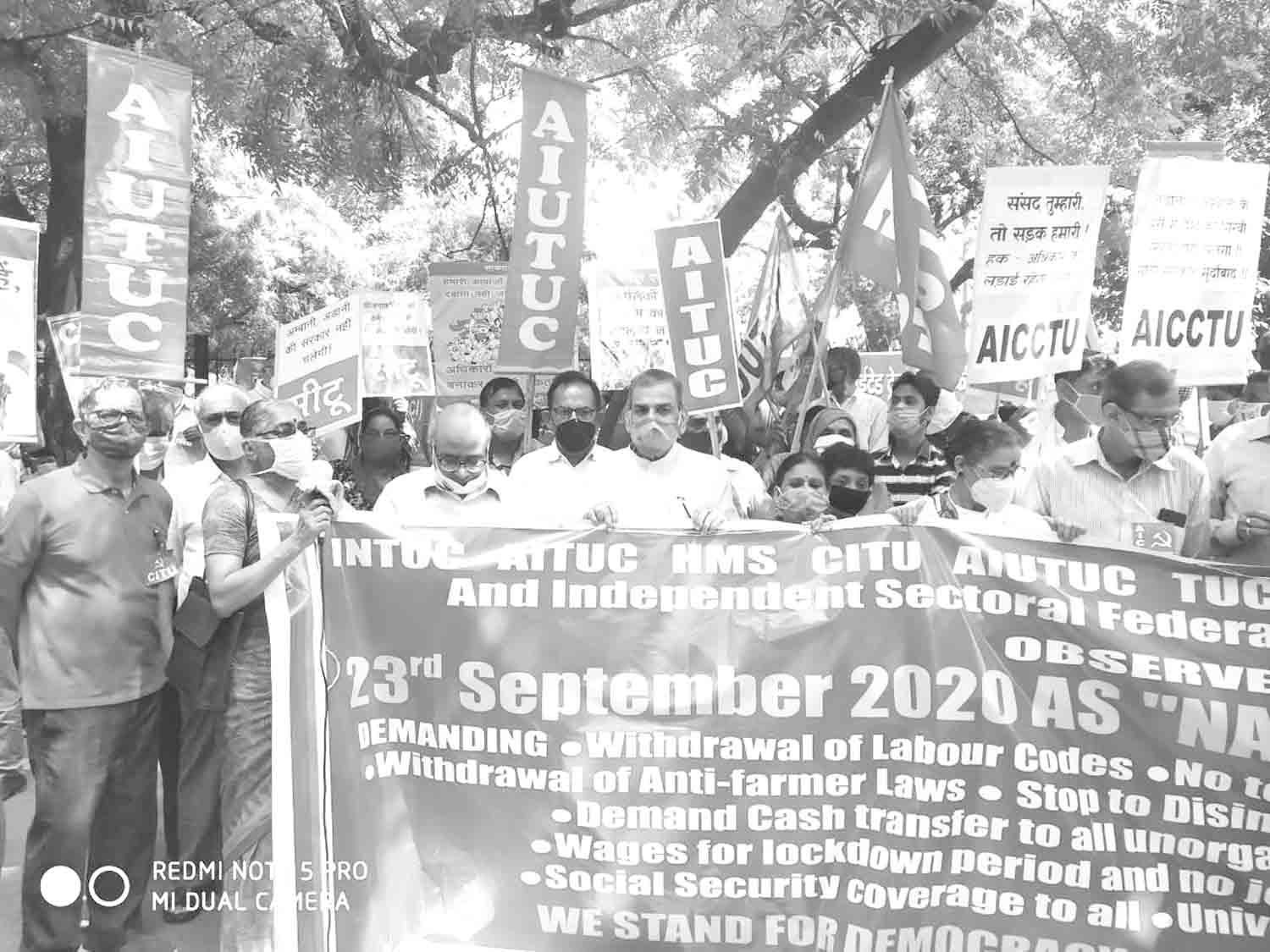 THE joint platform of central trade unions and independent industrial federations called for countrywide protests on September 23, 2020. This was on the immediate lockdown related demands of workers and toiling people, opposing the labour codes that curtail the existing rights and benefits of the workers and also the privatisation drive of the BJP led government.

Workers across the country responded in a big way to this call.  Their participation in the demonstrations was even larger than that on the all India Protest Day on August 9, 2020, which was observed with the slogan ‘Save India’. On September 23, tens of lakhs of workers and employees, belonging to all the constituents of the joint platform of trade unions, participated in the protests in more than one lakh places all over the country. Through their powerful demonstrations, they asserted that it is they, the workers and the toiling people, who will together ‘Save the country’ from the disastrous neoliberal policies of the Modi led BJP government. They strongly condemned the increasing contempt for parliamentary democracy, norms and the Indian constitution, displayed by this BJP led government. They unambiguously declared that they will not allow this to pass.

The mobilisation of workers, the expanse of the sectors and places covered, and the demonstrations themselves reflected the anger of the working class against the manner in which the BJP government got the farm bills and the labour code bills passed in parliament. Not only in Delhi, where the central leadership of the joint trade union movement addressed the demonstrators, but in almost all the places, solidarity and support was expressed to the peasants fighting the anti-farmer bills passed hurriedly suppressing dissenting voices in parliament. The working class was called to directly participate and extend all types of help and support to the call of the All India Kisan Sangharsh Coordination Committee (AIKSCC) to observe militant protests including bandh, rail roko, rasta roko etc on September 25.

CITU committees took up the campaign well before 23rd September 23, as soon as the decision was taken by the central trade unions. In several states, despite the lockdown created difficulties, CITU state and district leaders and cadres physically visited workplaces and conducted meetings of activists, maintaining physical distancing and following all Covid protocols.

Though thousands of photos of the protests were received by CITU centre from across the country, concrete reports are yet to be received from most of the state committees. As per the reports at the CITU centre –

In many places the police did not allow the workers to gather and protest on the pretext of Covid restrictions, Section 144 being in place etc. In Ahmedabad, Gujarat, they not only arrested the protestors but also manhandled the press reporters and photographers to prevent them from reporting. In Lucknow, UP, the police blocked the joint trade union procession from reaching its destination.

These demonstrations were held on the very next day when the BJP government got the three labour bills – the Code on Industrial Relations, the Code on Social Security and the Code on Occupational Safety, Health and Working Conditions – passed in Lok Sabha. As was expected these bills were passed in the Rajya Sabha, even as the demonstrations were going on, without the presence of opposition members. Earlier, the opposition boycotted parliament protesting against the illegal suspension of eight MPs for exercising their right to demand division on the farm bills, which were declared passed amidst chaos. It is a shame that an elected government in parliamentary democracy shows such contempt for constitutional and democratic rights of not only common people but of the elected MPs within parliament as well. CITU’s national secretary Elamaram Kareem, was one of the eight MPs who was suspended. This BJP government has turned parliamentary democracy into a sham.

These Codes, now passed, are meant to promote ‘hire and fire’ regime and wipe out trade unions from workplaces. They provide open ended empowerment to the government to unilaterally alter and change provisions related to many substantive rights and working conditions of the workers, through executive orders.  It is too obvious that this is done at the dictates of their corporate masters.

The claims of the BJP government, of conducting wide consultations with all including trade unions, was exposed by none other than its co-member in the RSS parivar, the BMS. In a press statement on September 23, BMS said ‘‘none of the objections raised by BMS and other trade unions as well as the recommendations of parliamentary standing committee on labour in favour of workers are considered in the revised draft’. And further ‘Some important changes like that on standing orders are not even discussed in the consultation process; which will be violation of ILO Convention 144 ratified by Indian parliament’. However, it tries to shift the blame entirely from the government and the BJP leading it, from the prime minister and the PMO who control all policy matters, to the bureaucrats. Does it mean that the chappan inch, powerful and ‘visionary’ prime minister is a mere captive in the hands of the bureaucracy, some secretaries and joint secretaries in the different departments?

While congratulating the working class for their massive response to the call of the central trade unions, CITU strongly condemned the BJP government’s brazen assault on the Indian parliament. It said the Labour Bills and the Farm Bills are nothing but brazen acts to push the working class into 19th century slavery like conditions, drive our small and medium farmers into the deadly grip of the corporate agribusinesses and convert our small farmer based agriculture into corporate agriculture. Along with the whole sale privatisation of the public sector, these sound the death knell to our self reliant economy and our people. All these are only meant to serve the corporate cronies of the BJP government.

The only way before the working class movement today, as the 16th conference of CITU exhorted, is to defy and resist at the ground level, the implementation of these bills that seek to push them into 19th century working conditions. Working class did not accept that then. They fought and achieved legal rights and protection. Working class will not accept this today. They will fight tooth and nail to protect whatever they have achieved. This is what the working class declared through their massive mobilisations despite the surging Covid. They made it clear that they are ready to defy, resist and stop these anti-people and anti-national measures on the ground, come what may.

But that is not the end. Working class needs to go further. They cannot allow the ruling classes to continue their machinations to attack their hard won rights. The fight has to be carried further on to end neoliberalism and then all exploitation; to change society for the better.