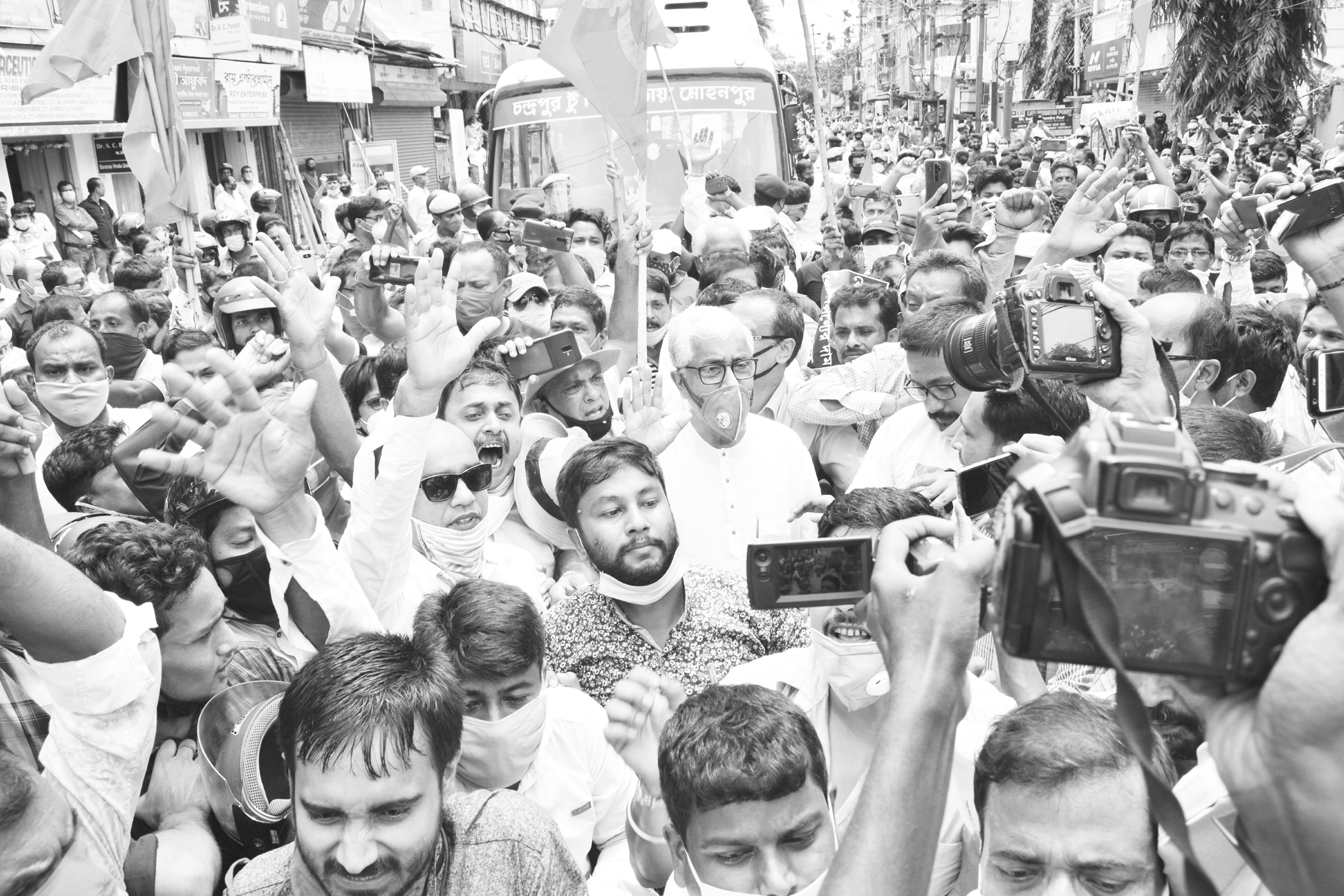 COVID-19 infections have been spreading in Tripura at an alarming scale, coupled with a total collapse of health services for both Covid and non-Covid patients. At a time many people are dying at a premature age, bike-borne BJP miscreants started another drive of terror, attacks, intimidation, arsons and destruction of properties targeting the opposition leaders, supporters and sympathisers throughout the state.

On the call of the CPI(M) Central Committee, protest demonstrations were organised throughout the state on a 16-point charter of burning demands of people on August 26. The demonstrations were held adhering to the Covid-19 guidelines. Having been aggrieved by loss of livelihood, indifferent attitude of the BJP-led government in providing necessary relief for maintaining their existence in this crisis period, and importantly, protesting against assaults on the rights of the working people and democratic and human rights, the poor participated in this movement in a massive way.

The success of the protest demonstrations raged the BJP miscreants madly. Showing utter disregard to law of the land, least fear of the police and judiciary, the BJP supporters on bikes jumped into action against CPI(M) leaders, supporters and sympathisers, mainly targeting those who joined the protest programme on August 26.

Till September 5, one CPI(M) local committee office in Pratapgarh, on the outskirt of Agartala, has been ransacked, looted and demolished by the ruling party goons. During the period, no less than 50 houses of CPI(M) leaders, workers and supporters in different Sub-Divisions were attacked, bombs thrown inside and people physically assaulted. Some of them received grievous injury and had to be hospitalised. In Belonia, the house of an auto-rickshaw workers’ union leader was set on fire by spreading petrol surrounding it. The family members somehow came out of burning house leaving everything in the flame. August 29 was the martyrdom day of Dilip-Tarun-Arabinda-Rajeswar-Sumitra. They attained martyrdom during the Congress regime. Every year DYFI observes this day showing profound respect for the martyrs. This year the DYFI in Belonia organised a Blood donation camp where nearly 150 youths donated blood. At night the BJP goons carried out attacks on the houses of the donors one after another. The BJP miscreants demolished several martyr columns in Belonia. Similarly, the martyr column of Tapan Chakraborty of Teliamura Sub-Division was demolished by brute force of the ruling party. August 30 was the day of martyrdom of Dr Ajit Roy Chowdhury, a headmaster who was brutally killed by the Congress assassins in 1989, because he lodged a litigation challenging dissolution of elected panchayat bodies by the then Congress-led coalition government. The BJP goons tried to thwart the programme of his commemoration.

A CPI(M) legislative party team led by Polit Bureau Member Manik Sarkar visited some of the terror-hit areas in Pratapgarh, West Tripura on September 7 and in Khowai the next day. The members of the victim families broke down before the visiting members for their material loss and physical torture. The delegates consoled them saying that it is not the hour to shed tears, rather it is the hour for generating mass-opinion against those perpetrators of terror, who are afraid of any protest against anti-people and anti-national measures of the government.

After visiting most of the victim houses, the legislative party team met the press at Khowai CPI(M) office in the afternoon. While addressing the press, Manik Sarkar said the chief minister of the state, who is also home minister as well as one of the top leaders of the ruling party, has the biggest responsibility to take control over the situation. He let the genie come out of the bottle. Now it is the chief minister who must confine it into bottle again. Every rational-thinking person, including the media, should take positive role to alienate terror-mongers socially and politically, Sarkar said.