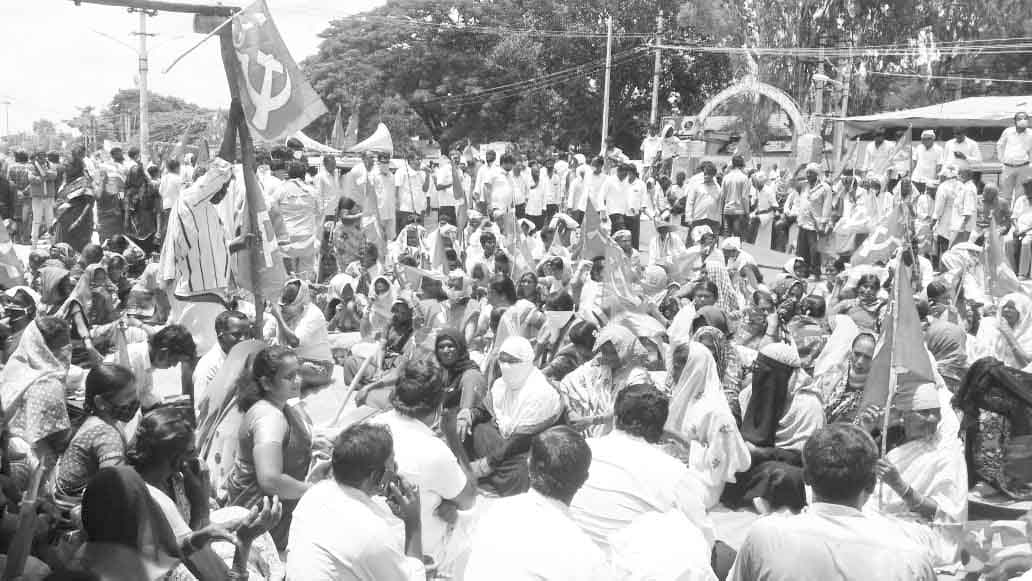 Below we publish reports on the nationwide demonstrations called by the Centre of Indian Trade Unions (CITU), All India Kisan Sabha (AIKS) and the All India Agricultural Workers’ Union (AIAWU), on September 5.

ON September 5, the central leadership of the CITU, AIKS and AIAWU held a demonstration outside the  BTR Bhawan in New Delhi to condemn the anti-working people and pro-corporate policies of the BJP-RSS Modi regime. In view of this being the third anniversary of martyrdom of Gauri Lankesh, the demonstration also denounced the communal forces.
The demonstration was addressed by CITU president K Hemalata, AIKS president Ashok Dhawale and AIAWU joint secretary Vikram Singh.

MAHARASHTRA
AT the joint call of the CITU, AIKS and AIAWU for nationwide demonstrations on September 5, 24,227 workers, peasants and agricultural workers at 719 centres in 67 tehsils of 21 districts took part all over Maharashtra. In several districts, activists of the AIDWA, SFI, DYFI and AARM also took part. They condemned the anti-people, pro-corporate, authoritarian and communal policies of the Modi-led BJP-RSS central government. They also concentrated on the burning local issues of the people, gave memoranda to government authorities and made all efforts to solve these local issues.

September 5, 2020 marked the second anniversary of the powerful two lakh-strong worker-peasant rally under the red flag in Delhi in 2018, led jointly by the CITU, AIKS and AIAWU.

It was also the third anniversary of the martyrdom of Gauri Lankesh, who was gunned down in Bengaluru that day in 2017. This issue was also highlighted in the demonstrations that day.

However, the atmosphere in Maharashtra that day was severely dampened by the sad news that came the same afternoon of the demise due to Covid of Comrade Uddhav Bhawalkar of Aurangabad. The 68-year old Bhawalkar was a member of the CITU general council, vice president of the CITU Maharashtra state council, and a former member of the CPI(M) Maharashtra state secretariat. He was one of the founder leaders of the SFI in Maharashtra in the 1970s and was a fighting trade union leader in Aurangabad and the Marathwada region.

KARNATAKA
On September 5, thousands of peasants, workers and agricultural workers led by the AIKS, CITU and AIAWU took part in demonstrations in all 30 districts of Karnataka to condemn the anti-working people and pro-corporate policies of the BJP-RSS central and state governments. Reports have been received that joint protests of peasants, workers and agricultural labour have taken place in over 250 centers including several at taluk, gram panchayat levels.