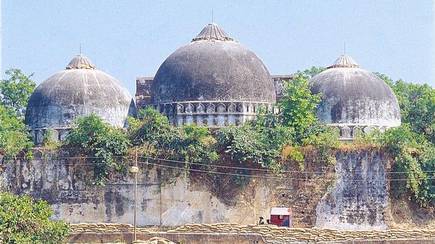 THE Bhumi Pujan ceremony for the Ram temple at Ayodhya, though organised by the Ram Janmabhoomi Trust, became an official function with the prime minister laying the foundation for the temple with the Uttar Pradesh chief minister and governor in attendance.

August 5, thus, marks an important stage in the political project of Hindutva; the building of a Ram temple at the site where the Babri Masjid stood was a centerpiece of its mobilising strategy to shape a Hindu majoritarian State.  For the BJP-RSS combine, the Ram temple project is a matter of “national honour” setting right the so-called wrong committed in the historical past against the Hindus.  Ram is not just a deity but a national symbol.

Under the presidentship of L K Advani, the BJP adopted the Palampur resolution in 1989 calling for the building of a Ram temple at the site where the mosque stood. The political journey of Hindutva’s communal mobilisation began with Advani’s rath yatra, which left in its wake a trail of communal violence that killed thousands, the demolition of the Babri Masjid that further sparked horrific violence, followed by various maneouvres towards getting the legal sanction for the temple.

After the BJP came to power with a bigger majority in May 2019, the Supreme Court expedited the case with daily hearings and delivered the verdict that the government wanted. After terming the demolition of the mosque an “egregious violation of the law”, the court proceeded to hand over the entire 2.77 acres to the Hindu plaintiffs for building the temple.

The temple construction will be welcomed by a large number of Hindus for whom faith in Lord Ram is paramount.  However, there is another grim reality – the character of the Indian Republic is changing.  The term `republic’ (which means a government of the people, not a monarchy) does not necessarily mean it is secular.  The Islamic Republic of Iran, for instance, derives its legitimacy from Islamist ideology. The State of Israel, aspires to be a Jewish State reducing its Arab population to second class citizens. In India, the political project of converting India into a Hindu majoritarian republic has scored a significant success with the construction of the Ram temple. And there has been no punishment for those who brazenly violated the law and the constitution by an act of vandalism that destroyed the mosque.

Modi in his speech at Ayodhya conflated the image of Ram, with national honour and national unity. He called the Ram temple a symbol of national sentiment. The talk of brotherhood and unity is hypocritical after the divisive and violent course the temple movement has taken.

The merging of State, politics and religion is something which was flaunted by Modi in Ayodhya.  What a contrast to the stand taken by  India’s first prime minister, Jawaharlal Nehru, regarding the construction of the Somnath temple in Gujarat.  He denied any State funds for the purpose and conveyed his objection to Presiden Rajendra Prasad inaugurating the temple.  The principle he stood for was clear and simple:  a secular State cannot patronise or fund the construction of a religious place of worship.

Ethno-religious nationalism which seeks to mobilise people on religious and ethnic identity is the very opposite of the anti-colonial inclusive nationalism which pervaded our freedom struggle and the establishment of the independent Indian State. This narrow nationalism based on politics of revenge and targeting the minorities has become the hallmark of many rightwing authoritarian regimes.

Just two weeks before Modi laid the foundation stone  for temple construction, on July 24, Recep Erdogan, president of Turkey, led the first Friday prayers in the world famous Hagia Sophia in Istanbul.  This historic monument was built as a church in the sixth century AD by Byzantine emperor Justinian in Constantinople (later Istanbul).  After being a church for 900 years, it was converted into a mosque when the Ottomans captured Constantinople in 1453 AD.  After Kemal Ataturk overthrew the decrepit Ottoman rule and took the revolutionary step of establishing a secular republic, in 1934, by a cabinet decision, the 1500 year-old religious monument was converted into a museum.  This architectural marvel remained a museum till last month.

The ruling Islamist AKP Party, which governs Turkey, demanded that the Hagia Sophia be made a mosque again.  The highest administrative court of Turkey, the Council of State, obliged and unanimously ruled that the 1934 cabinet decision was illegal and its status as a mosque was restored on the same day that President Erdogan issued a decree. Like Modi, for Erdogan, this was a step to defend national honour.

In Israel, where the ideological soul-mate of Modi, Netanyahu, is heading an ethno-nationalist government, excavations have been going on for decades beneath the Temple Mount to unearth the remains of the first Jewish temple built centuries before Christ.  The Al-Aqsa Mosque revered by Muslims as the most holy place after Mecca and Medina is situated on the Mount.  Jewish extremist forces have long been demanding that the mosque be demolished and a Jewish temple built there. The Mount, which is holy for Jews, Christians and Muslims is a perennial source for mobilising the Jewish extremist elements against the Palestinians and Arabs.

There are some who think that having got their way to construct the Ram temple at Ayodhya, the Hindutva communal mobilisation will abate.  They are mistaken.  The political project of the Hindutva rulers requires constant fuelling with issues which can create communal polarisation and help find ways to consolidate their hold on power. For example the Places of Worship Act of 1992, ordains that the status quo on religious sites as on August 15, 1947 be maintained. Ayodhya was not brought under its purview as it was termed a dispute prior to independence.  The original RSS-VHP campaign was to get hold of not only the site at Ayodhya, but also in Kashi and Mathura, where mosques are situated.  The law will hardly be an obstacle when the Hindutva forces decide to rake up these so-called disputes.

Finally, one must remember the date chosen for the Bhumi Pujan at Ayodhya – August 5.  It is the date on which, a year ago, the state of Jammu & Kashmir lost its special status and was dismembered into two centrally-run union territories.  The new dispensation cannot tolerate a Muslim majority state in the Indian union.

For Congress leaders and some secular politicians who are now joining the chorus of celebrations on the Ram temple being built and publicly espousing their faith in Ram, the symbolism of holding the event on August 5, is a warning.  If they adopt this opportunistic approach, it will only facilitate those who want to establish a Hindu Rashtra.