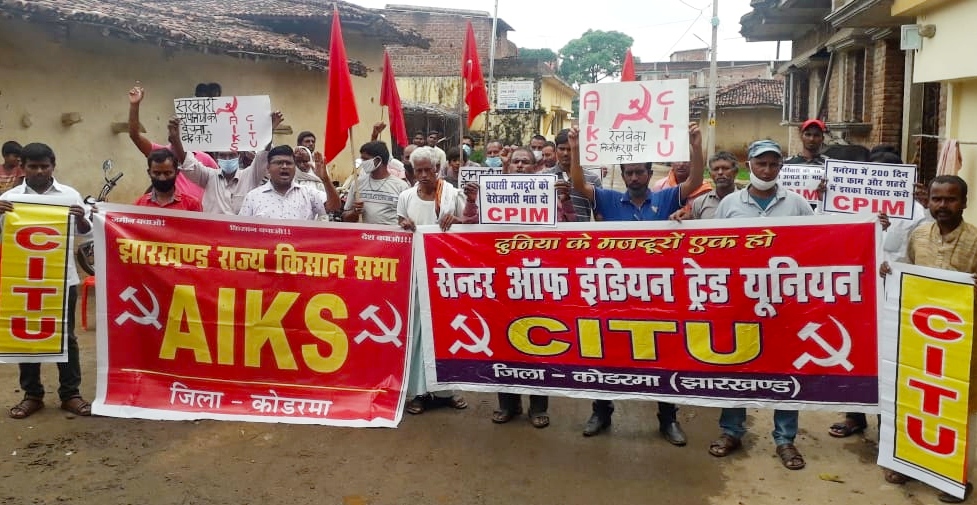 SEVERAL thousands of workers, peasants and agricultural workers staged protest demonstrations at the block level on July 23, demanding ration, jobs/unemployment allowances and healthcare facilities. The Centre of Indian Trade Unions (CITU), All India Kisan Sabha (AIKS) and the All India Agricultural Workers’ Union (AIAWU) jointly gave the call for protest on burning issues of the people amid the Covid-19 pandemic.

In spite of the Covid-19 restrictions and heavy rains in many parts of the country, scores of people assembled for the demonstrations and submitted memorandum to the block administration listing their demands. In many places, youth and women’s organisations joined in the struggle. In spite of the grim flood situation in Assam, programmes were organised in many places. In Agartala, Tripura, around 120 activists along with state leaders of CITU, AIKS, AIAWU, AIDWA and Adivasi Adhikar Rashtriya Manch (AARM) were arrested and detained till late evening. There was severe repression of protesters in the state. There was massive participation of migrant workers demanding job and scheme workers on Covid-19 duty demanding safety gear and timely payment of wages in the programme in various states. ASHA workers in Madhya Pradesh went on one-day strike. In Haryana, the protest was held on July 24, in view of the ‘teej’ festival.

The CITU, AIKS and AIAWU have been taking up joint campaigns and struggles in the past. The historic ‘jail bharo’ on August 9, 2018 and the ‘Mazdoor-Kisan Sangharsh’ Rally at Parliament Street on September 5, 2018, in which over 1.7 lakh participated, were evident of an emerging class unity of the working class and the peasantry.

At present, there is a very serious situation prevailing in the country with aggressive measures to complete the neoliberal process, taking advantage of the coronavirus-induced lockdown – paradigm shift in agricultural economy, finishing off peasant agriculture to the benefit of the landlord-corporate clique through ordinances, endangering food security; near total elimination of public sector; totally liberalised FDI in crucial and strategic sectors of the economy finishing off our self-reliance; annulment of all labour laws to impose slavery on the working class and so on. Instead of taking effective measures to contain the Covid-19 pandemic, the BJP government is aggressively trying to centralise the entire governance through authoritarian measures and fascistic intent. At the same time, the RSS-led forces are communalising even the pandemic. The lockdown has created a situation of reverse migration, acute unemployment, deepening absolute poverty and total lack of health facilities, particularly in the countryside.  It is only the LDF government in Kerala which has been making internationally acclaimed efforts in containing Covid-19 and addressing the issues of migrant workers as an alternative to the neoliberal policies.

The discontent of the people against the government is growing, which is reflected in their participation in the independent and joint calls of each sector against the policies of the government in spite of the pandemic. The actions called by the CITU on April 21, May 1, May 14 and May 30, and by the joint platform of central trade unions on May 22, the Kisan Samman Diwas on May 16 and the protest on May 27 by the AIKSCC and the All India Protest Day on June 4 by the AIAWU, received magnificent response.

CITU, AIKS and AIAWU felt that in the current situation there is an urgent need for joint, more direct and visible movements at all levels, especially at the grassroots level, on burning issues of the people in general, which must be stepped up to combative countrywide united struggles against the anti-people, anti-farmer, anti-worker neoliberal policy regime.

The central leadership of all three orgnaisations are meeting regularly to plan and monitor the situation, various spontaneous as well as local movements and the national calls. The feature of the movement during the pandemic period is the support and solidarity by each section to the calls of the other sections. It is jointly decided to launch a nationwide joint campaign on the major immediate demands of the people related to health, food, income and employment. The demands are:

It is also decided to address the issues of migrant workers on priority basis. A call has been given for a massive countrywide militant mobilisation and action on August 9.

CITU, AIKS and AIAWU congratulated the grassroots level activists who took it to the working people through a massive campaign and made the action successful and called upon the workers, peasantry and the people to step up the united struggles against the anti-people, anti-farmer, anti-worker neoliberal policy regime.