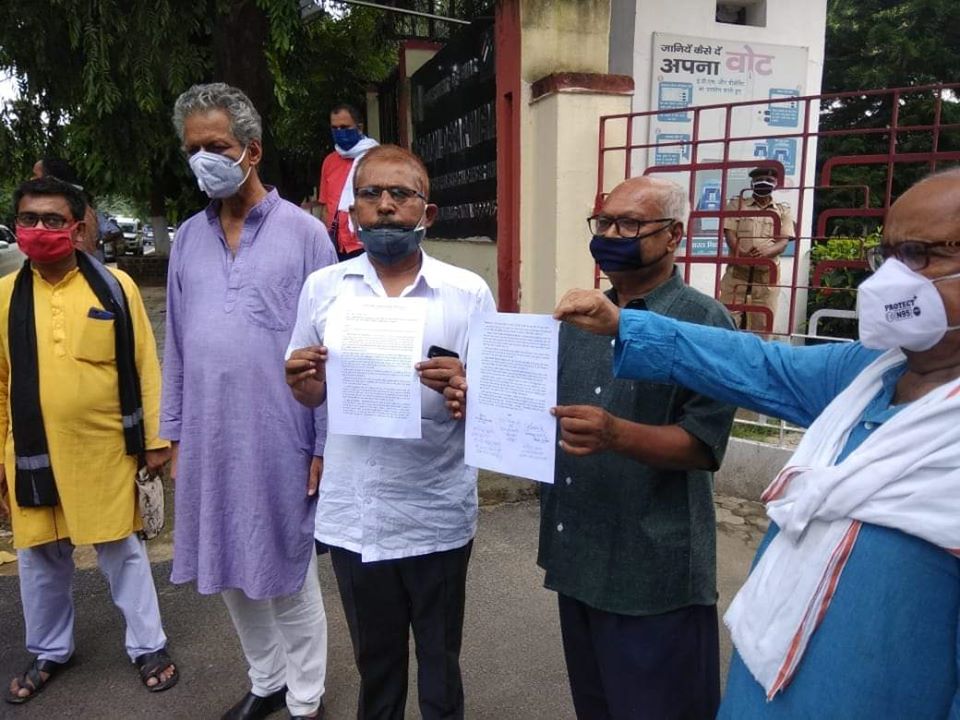 BIHAR: Hold Free and Fair Elections: Actual and Not Virtual!

THE recent explosion of cases of coronavirus in Bihar is threatening the lives and livelihood of common people. The Bihar government has declared the lockdown for the entire month of July as the daily count of infected people is growing by leaps and bounds.

Rich and elites, politicians and bureaucrats infected with the deadly virus are rushing to AIIMS at Patna as the other medical colleges and hospitals are ill equipped to treat the Covid-19 patients. A large number of doctors, nurses, policemen, politicians, bureaucrats have got infected and are unable to get a bed in AIIMS Patna, what to talk about the common people.  Two eminent doctors, a bureaucrat died during treatment. Family members of the bureaucrat have alleged that he died due to negligence and for not providing treatment at a crucial hour. His video went viral as he was waiting to get a bed in the hospital.

Though there is a big medical college and hospital at Bhagalpur but when the district magistrate got infected; he also rushed to AIIMS Patna for proper treatment. The Bihar government has announced the names of the hospitals where corona patients will be treated and they will cater to the surrounding districts; these are PMCH, NMCH, in Patna, DMCH Darbhanga, Gaya and Bettiah. But these hospitals lack the basic facilities and hence people rush towards AIIMS at Patna.

The mishandling by the government from the very beginning has contributed to the spread of coronavirus which has made inroads even in the rural areas. The poor and the marginalised have been left to fend for themselves. The reverse migration of workers to their native places along with lack of testing facilities, mismanagement of quarantine centres also facilitated the ground for the spread of coronavirus.

BJP headquarter at Patna has turned into Corona hot spot as 75 of its leaders and cadres tested positive. Doctors and nurses have been daily raising their collective voice for the provision of PPE kits and other safety equipment. The junior doctors of premiere PMCH went on strike for the above mentioned demands. It seems that the government is banking on herd immunity to prevail and have stopped equipping the government  hospitals to meet the pandemic menace.

With heavy rain and most of the rivers in North Bihar on the spate, the government of the day is not responding to the situation the way it should.  What to talk of the daily briefing ,the chief minister of Bihar has never met the press on the corona issue and nobody knows what are the actual numbers of the infected people. Lack of testing facilities at district level and the deliberate attempt of the government to conceal the real numbers does not show the actual picture of the state.

The total apathy and single minded approach to usurp power by manipulating the election process in the coming election, is the sole motive force for the present regime in Bihar. BJP leader Amit Shah and their state leaders have started organising virtual rallies by spending a lot of money on LED TVs and other logistics to reach the people. JD(U)has also  joined the race. In the meantime the deputy chief minister and BJP leader, Sushil Modi demanded that due to corona, online voting arrangements should be made.

Election Commission at Patna convened a meeting of all the national and regional political parties in which CPI(M), through a written memorandum to the commission, objected and rejected the idea of virtual rallies and online voting system. It emphasised the need of involving the common voters in the election process and allowing the political parties to campaign among the people by observing the protocols of Corona. All the political parties should be provided with a level playing field to approach the people and the role of money should be curbed.

It is a challenging situation, as on the one hand the pandemic is to be combated and on the other the process of electing a new government cannot be delayed as it will be a proxy regime of BJP through president's rule. In the above background, the Left and other major opposition parties  RJD and its allies have raised their voice against the highjacking of the election process to suit the ruling dispensation.   BJP and JDU, will not be allowed to usurp the power by manipulating the election process in their favour.

Representatives of CPI(M), CPI, CPI(ML), HAM met the chief electoral officer in the commission's office and handed over a written memorandum  highlighting their concerns regarding the spread of corona and the process of electioneering in the coming months. They categorically rejected the idea of virtual rallies and on-line voting systems. The representatives also objected to the new proposal for the postal ballots to people aged 65 years and above as one of the options.

The representatives appealed the commission to ensure free and fair election and ensure at the same time the atmosphere for the participation of voters at large. It further argued that such an atmosphere can be ensured only by involving all the political parties, social and civil organisations right from state to panchayat and town levels.