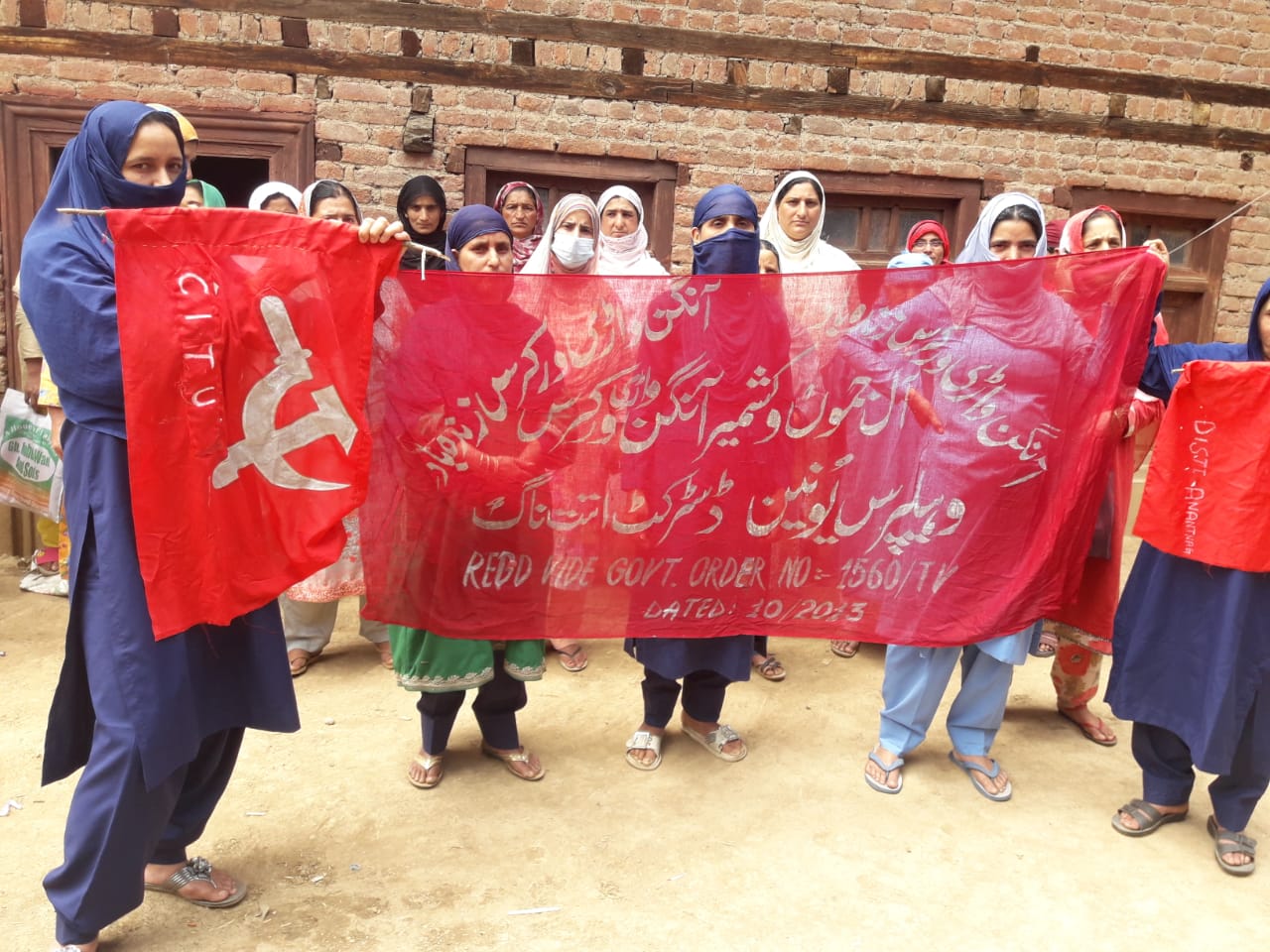 A CRUCIAL section of Covid-19 frontline workers – all women and ill-treated all through – has been fighting the dual dangers of the pandemic and the increased hunger and malnutrition due to the lockdown. Not even considered as “workers” by the government, Anganwadi workers and helpers, ASHA workers and Mid-day Meal workers have been risking their lives as they worked to alleviate the sufferings of the people during the pandemic as India’s ruling class is busy toppling governments, selling off the country’s assets and sovereignty. On the day the corporate media was “celebrating” the talks between the prime minister and the CEO of a corporate giant which will buy assets created in the country under the garb of investment, an Anganwadi worker in Uttar Pradesh was admitted to hospital after she attempted suicide as she had not been paid wages for the last one year. The body of an Anganwadi worker of Sanakhemundi block in Odisha, who was engaged in Covid-19 duty, lay at a waste dumping yard for several hours with her daughter sitting beside her body helplessly.

On July 10, thousands of Anganwadi workers and helpers wearing red dress and red masks were on the streets demanding their rights for safety and wages, and the right of every child born in the country to live.

The scheme workers – 10 lakh ASHA workers and facilitators who go door-to-door conducting surveys, educating the people and taking care of people in quarantine centres, nearly 26 lakh Anganwadi workers and helpers under ICDS who are also performing similar duties along with ASHA workers and distributing ration, nearly 27 lakh Mid-day Meal workers who supply ration door to door to the school-going children and perform duties in community centres and quarantine centres, and other workers under the National Health Mission (NHM) including the 108 Ambulance workers – have been risking the lives of their own and their family members.

Most of them are not provided with any kind of safety gears, even masks and sanitiser. Many are termed as ‘Carriers of Corona’ and are being attacked. There are scores of cases of them getting infected with Covid-19. Many of them are finding it difficult to get any treatment, leave aside hospitalisation. There are many incidents of ASHA workers, Anganwadi workers, MDM workers and other scheme workers dying of the coronavirus. In many cases, they are not even getting the life insurance amount announced with much fanfare by the government since the Covid-19 tests are not conducted. The hospitalization and quarantine expenses are to be borne by the workers since they are not covered under the insurance. There is no additional allowance for them to risk their lives. Leave it, they do not even get the wages on time, not to talk about the rent and other allowances.

INCREASING MALNUTRITION
It is almost four months of the lockdown and the fight against pandemic, the cases of infection and deaths are increasing alarmingly in the country. What is more alarming is that the government has not made any improvement in the health infrastructure or facilities during this period for which it had declared the lockdown. Only Rs 15,000 crore is allotted to the health sector while in the same period it has written off Rs 68,000 crore of loans to 50 individuals, including Nirav Modi and Vijay Mallya! Remember that the entire health budget for the year is only Rs 69,000 crore and the total budget of ICDS for 8 crore children and two crore mothers and 26 lakh Anganwadi workers and helpers is only around Rs 15-18,000 crore! While 40 crore Indians have become poorer during this period, Mukesh Ambani has almost doubled his assets and became the sixth richest individual in the world!

Now, the UNICEF has come out with a report that since the schools and Anganwadi centres are closed and the noon meal is not provided to the children, the malnutrition will increase manifold in the coming days. It had estimated that in the next six months an additional three lakh children under the age of five years will die due to poverty and malnutrition in our country!

Since lockdown, ICDS is not providing the hot cooked meal, and the quantity of dry ration per child is so less and it cannot be guaranteed that the children will get the required amount of nutrition every day. Since the starting of lockdown, the All India Federation of Anganwadi Workers and Helpers (AIFAWH) has been demanding that the quantity and quality of the ration must be improved, but the government is not ready to increase the allocation for ICDS or any basic service. Instead, utilizing the lockdown, the government is promoting the cash transfer. In UP and Bihar, governments are trying for cash transfer in place of food grains. One must recall that this government has already proposed cash transfer (DBT) in ICDS and started pilot projects in UP and Rajasthan. Even the ration, which is the right of every child and mother, is not supplied properly.

BUILDING RESISTANCE
Recently, some such stories do appear in the media about the ‘poor’ women workers or ‘poor migrant workers’ seeking for the sympathy and some charitable actions. What is missing from most of these stories is the right of the workers and in case of the scheme workers and their issues, the crucial question of the right of the people for basic services – nutrition, health and education. The one which is totally absent in the reports is the right to collective bargaining and strike of the workers. The scheme workers while fighting Covid-19, fighting malnutrition, fighting absolute poverty and hunger during the lockdown days, doing their duties and more, also doing a considerable amount of relief work for the needy, distributing food, sanitiser, masks etc, were also in the forefront of the fight for their rights.

The CITU is in the forefront organising some of the most participatory and innovative struggles during this period, starting with the April 21 struggle, Bhashan Nahin Ration Chahiye (enough of speeches, we want food). We have taken up the issue of safety of the frontline workers on May 14 – phool nahin suraksha chahiye (no more flowers, we want safety) – which got tremendous response from even the public.

In many states, there were militant struggles by the ASHA workers and Anganwadi workers, including strikes, and the authorities were forced to accept many of their demands including additional remuneration and hospitalisation.

On June 25, ASHA workers all over the country observed Demands Day at the call of the all-India coordination committee of ASHA workers (CITU). Militant demonstrations were held throughout the country. On June 26, mid-day meal workers under the leadership of MDMWFI also held protest action throughout the country. The MDM workers, the poorest and socially deprived section, are not paid for two months by the government since they are not entitled to wages (Rs 1,000 per month) during the summer holidays.

LALKAR (CHALLENGE) DIWAS
This is the background when the AIFAWH took the decision to observe the all India Demands Day on July 10, which it observes every year on the most relevant issues as ‘Lalkar Diwas’ to challenge the government which has unlocked the exploitation but locked down democracy. It demanded the strengthening of ICDS and saving the three lakh children from dying.

In spite of the threat by the authorities, Lalkar Diwas was observed in a very disciplined manner, maintaining all norms of physical distancing. According to reports, nearly two lakh Anganwadi workers and helpers participated in the struggle in around 300 districts. They have submitted memorandum to the Prime Minister and the WCD Minister through the local authorities.

At the initiative of AIFAWH, the scheme workers’ joint platform of all the central trade unions has decided to intensify the struggles and is planning for a countrywide three-day strike in the first week of August.