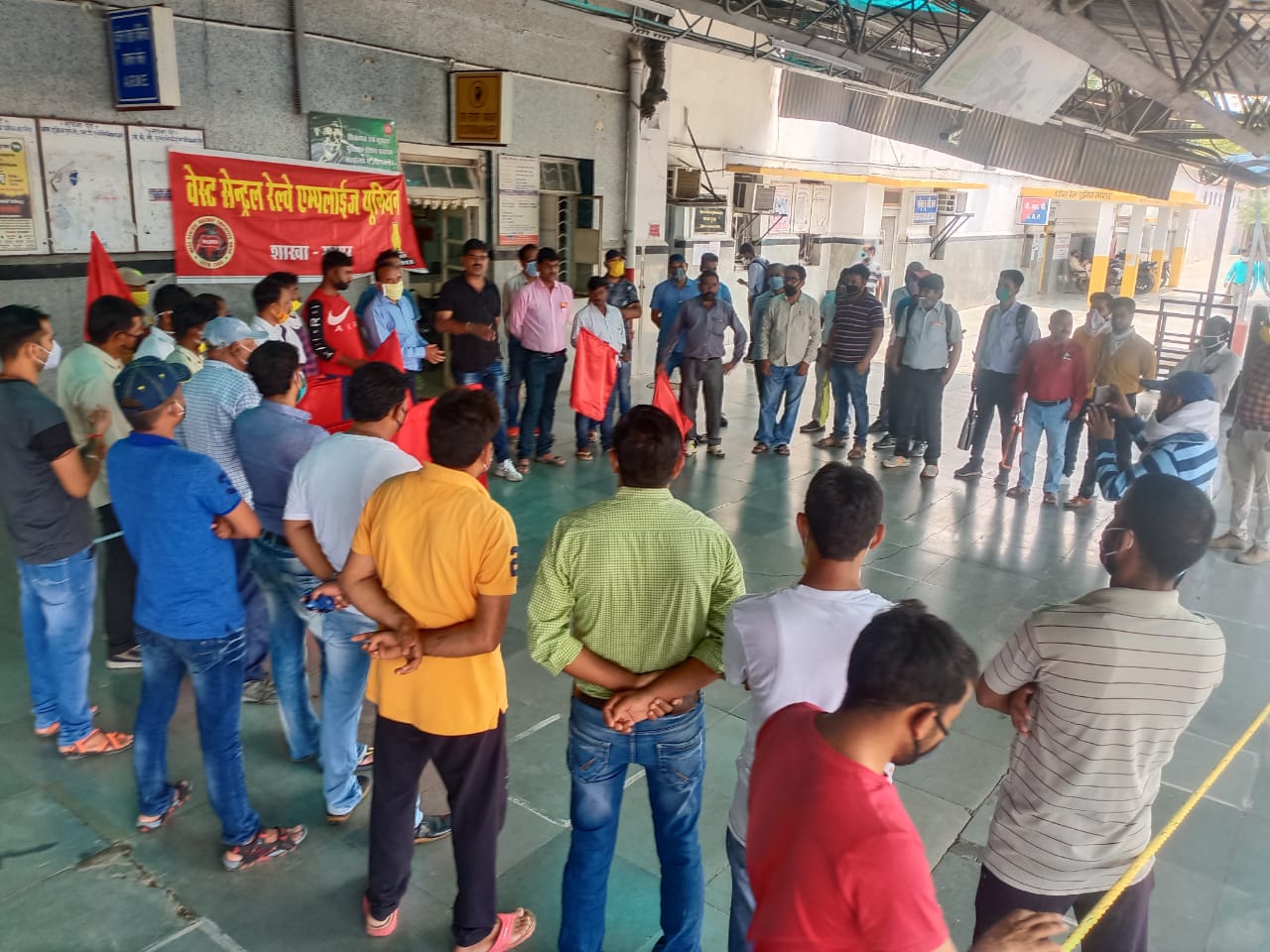 Workers were asked to step out of their houses to step up the struggle. They not only stepped out, but started marching on the streets.

THE joint platform of central trade unions and independent industrial federations gave the call for an all India protest day to be observed on July 3. This followed the joint protests held all over the country on May 22, which were held when the lockdown was still on. On that day, workers held placards and shouted slogans from within the compounds of their houses and in the limited factories and establishments which began functioning.

Since then the dubious intention of the Modi led BJP government to utilise the lockdown to push through its neoliberal agenda became blatantly visible. The government has put the entire country with all its wealth – the public sector, our natural resources and human resources – at the feet of the big corporates and businesses, to satisfy their hunger for profits.

The people of the country cannot remain silent spectators to such mortgaging of the country to the domestic and foreign multinationals. The working class decided to raise the pitch of the struggle. The joint trade union platform called for the all India protest day on July 3, to be followed by non cooperation, resistance and defiance of the present neoliberal regime.

CITU called upon the working class to step out of their houses, and following all the lockdown protocols put in place by the different state governments, step up the struggle towards defiance and resistance to the anti-people and anti-national policies of the BJP government.

The response from the working class was magnificent. The three days’ coal workers’ joint strike against commercial mining and privatisation, which started one day before the all India protest day, on July 2 and ended on July 4, inspired the entire working class of the country. Such a joint strike was unprecedented in the history of the coal workers’ movement. Production and dispatch of coal came to a total halt. Even before a few weeks, strike in coal mines was not considered possible. But the aggressiveness of the BJP government in starting the bidding process, which the prime minister himself had inaugurated, angered the coal workers. The workers coined and popularised the slogan ‘whether anybody leads or not, the coal workers will go on strike’. It was the workers at the pit level who campaigned and organised the strike, even as the national or state leaders could not physically visit coal mines though the leaders of all the unions were actively following up and guiding the strike. The strike was unitedly led by all the trade unions in the coal sector.

The coal strike created confidence and enthusiasm among all sections of workers all over the country and propelled them into action on July 3. Over ten lakh workers and employees across the country participated in the protest actions. In several states, West Bengal, Andhra Pradesh, Punjab etc workers marched on the streets. Police resorted to arrests in Vijayawada in Andhra Pradesh, in Kolkata in West Bengal and in some other places.

A significant feature of the protest day on July 3 was the huge participation of the workers from the organised sector. In the previous protest actions, scheme workers and unorganised sector workers like anganwadi employees, ASHAs, construction workers, MGNREGA workers were the major participants, in the villages and interior parts of the country. While these sections did participate in many places this time too, in view of the ensuing all India Demands Day of All India Federation of Anganwadi Workers and Helpers on July 10 and the recently held all India protest day of ASHAs and midday meal workers, their presence was comparatively less on this occasion.

In the protest actions on July 3, it was the work places, the factories, offices, mines and others, which were the main centres where demonstrations took place; not so much the homes and neighbourhoods. In addition to the industrial workers, new sections of workers like the toll plaza workers in Punjab, head load workers, rice mill workers etc participated in large numbers. Insurance, bank, BSNL, defence etc employees also participated in large numbers. This indicates the growing anger against non payment of wages, wage cuts, retrenchments, reduction in the workforce and increasing work load and working hours etc in the factories, offices and establishments that have started functioning. In several factories and establishments, mainly in the private organised sector in states like Maharashtra, Karnataka etc, workers have even been going on strike against non payment of wages, wage cuts, retrenchments; in several cases they were successful. The IT employees, including in big MNCs like Cognizant, also face these problems and are seeking union interventions.

Another significant feature is the huge participation of the railway employees in the protest actions. The major two recognised unions of the railway employees, the All India Railwaymen’s Federation (AIRF) and National Federation of Indian Railwaymen (NFIR) remained conspicuously silent about the latest measures of the Modi led BJP government which has announced privatisation of 109 pairs of trains, corporatisation of the railway production units and other measures to sell off the Indian Railways to big domestic and foreign corporates. But the All India Loco Running Staff Association (AILRSA) and some unions of the railway employees like the Eastern Railwaymen’s Union affiliated to AIRF, Dakshin Railway Employees’ Union affiliated to CITU, Indian Railway Employees’ Federation etc joined the all India protest day opposing railway privatisation and focussing on their own demands. Large numbers of loco running staff participated in these demonstrations held almost all over the country.

Through this massive action, the working class has unambiguously expressed its anger which has been utilising the lockdown to put the country on sale, nullify all labour laws and also kill peasant farming in favour of corporate farming. It is a shame that the BJP government led by Modi, which so tries to deceive the nation by raising jingoistic and pseudo nationalistic slogans, is, in reality, mortgaging national interests by privatising coal, defence, railways, banks etc. It is even more shameful that the lockdown period is sought to be utilised to push these destructive exercises.

The working class has sent a strong message that the working class, which creates the wealth of this country, will not tolerate and accept lying down the machinations of imposing conditions of slavery on them. This is a warning for further intensification of joint struggle towards non cooperation, resistance and defiance in the coming days, if the BJP government remains adamant in implementing these disastrous policies.

The online meeting of the CITU secretariat which was held on July 6 briefly reviewed the July 3 protest day and expressed satisfaction at the magnificent response of the working class. It has decided to immediately start the campaign for the action programme to be decided by the meeting of the joint trade union platform on July 8, as part of its call for ‘non cooperation, resistance and defiance’.

In addition, the CITU secretariat also decided to organise demonstrations at the railway stations and railway headquarters, against railway privatisation, on July 16. It has decided to seek the support of all sections of people against this measure, which not only affects the railway employees but equally all sections of the toiling people like daily wage workers, vendors, employees, students etc. The secretariat also called upon all the committees and cadres of CITU to organise block level demonstrations and blockades on the joint protest day along with AIKS and AIAWU on July 23, on the demands of 10 kg food grains per person per month for the next six months, Rs 7,500 cash transfer every month for all non income tax paying families for the next six months and jobs, particularly MGNREGA work to everybody who seeks work including migrant workers, in the rural areas with Rs 600 per day as wage, and extension of employment guarantee scheme to urban areas.

The inept handling of Covid-19 by the BJP government has failed to bend the curve of the disease. A state like Kerala, where the LDF government’s efforts to contain the spread of the disease have won national and international accolades, had to re-impose strict ‘triple’ lockdown in Thiruvananthapuram and some other places. Large number of people coming from other countries and other states within the country are testing positive. In some other states too stricter lockdown rules are being put in place. The situation of the disease and lockdown, the distress of the workers because of the lockdown, unemployment, loss of income etc are not the same across the country. It differs in different states and even within the state.

But the BJP government is not taking one minute to stop to think about the disastrous impact of its policies on the people or on the country. It is taking the lockdown as an opportunity not to be missed, to fast track these measures. The working class and the toiling people of the country cannot allow this. They have to unite and utilise each and every possibility to visibly and loudly make their opposition to these policies; to warn the government that these machinations will not be allowed.

Now is the time to plan and initiate such joint struggles.