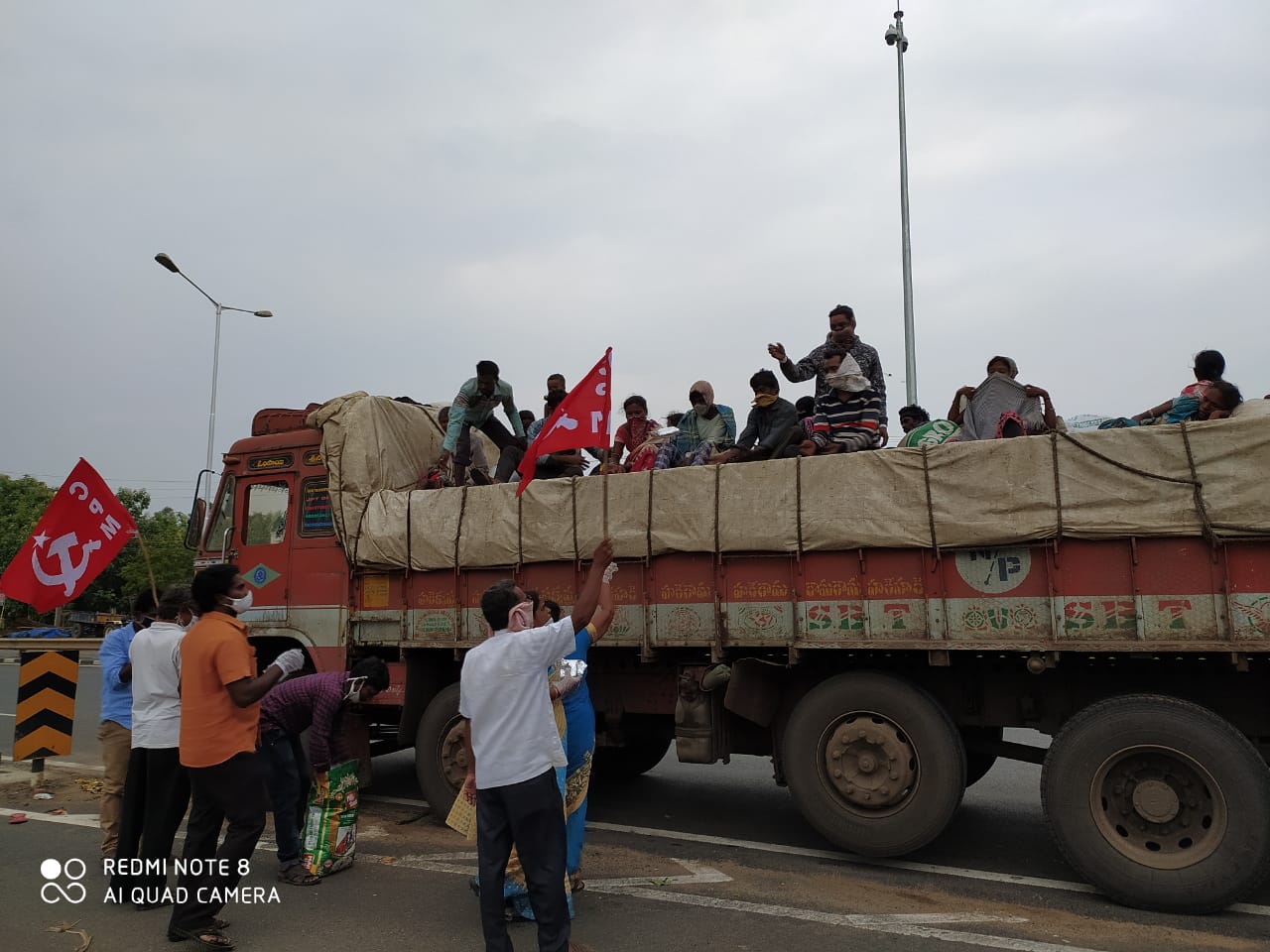 AFTER a sudden declaration of the nationwide coronavirus lock-down on March 24, the labour contractors and employers swiftly fled the scene. Except for lip sympathy, the state and central governments did nothing for the migrant labourers.

Thousands of migrant workers who have been trekking the national highway of Bengaluru-Anantapur have the same story to tell. Their little savings got exhausted soon, leaving them high and dry on the roads.  In the early days of lockdown, the migrant labourers  were even treated as infiltrators by the police and were not allowed entry at the check-posts of Andhra Pradesh. The authorities had even failed to provide shelter and left the workers to their misery. After a huge public outcry, the state government allowed them to move on.

It is the people, the poor and the commons alike, who came to the rescue of the migrant labour in their desperate times. All they needed was a catalyst to ensure the take off of the service activities and the dedicated cadre of the CPI(M) has ensured that it was provided at most places across the state.

URGE TO SERVE
Vinod is a full-time worker of the Party in Hindupur town in Anantapur district went to his native village, Kannesettipalli, after the town was declared as a red zone.  He has seen the stream of migrant workers along the road, walking under the hot sun and their hopeless situation urged Vinod to take the first step and help them. He and his wife worked in a nearby field and with the daily wage of Rs 600, the couple cooked and served meals to a few migrants. The passers-by witnessed his gesture and joined him. That is how the collective effort of the poor people of the village was started, which resulted in a transit camp for the migrants at Kodikonda check post.

EVEN ALONG KUTCHA ROADS
On the other side of the check post, Praveen, another wholetimer whose native place is five kilometres from the highway, saw the police obstructing the trekking migrants, who were sought to be sent back to Bangalore forcibly. But, these migrants wanted to somehow make it to their destinations.  It was not possible to set up a relief camp because the police would prevent it.  So, Praveen and a few other comrades arranged for two-wheelers, collected food parcels and water bottles and started distributing them to the migrants along these kutcha roads.  Soon the local people joined them and this activity went on uninterrupted for more than 15 days. More than Rs 1 lakh was donated within a few days to this activity.

Similar has been the story of Balaswamy, a poor auto driver, who himself is a victim of the lock-down but chose to stand by the migrants.  Along with three other Party members and six new contacts, he organised a camp at Somandepalli mandal headquarters for more than 15 days.  The local leaders of the ruling YSRC party and the police tried to stop this activity but had to beat retreat once the villagers reacted firmly.

The incidents proved that it is the commitment to the cause of the people and not an elaborate pre-planned programme or a very strong organisation that is a prerequisite to serve the people.

TREMENDOUS RESPONSE
Our comrades in Ongole noticed that some villagers brought cooked food and water on a tractor and were serving the migrants who were passing by. These villagers were not part of any organisation or any political party nor are they well-to-do. Our comrades immediately responded by organising two relief centres on either side of the town and started coordinating the work. Word spread quickly and help started pouring in from the most unexpected quarters, the village poor, and the merchants of the city, the teachers and some donors. It was the same experience in Nellore, Eluru or Rajahmundry or Tuni, not to mention cities like Vijayawada. A large camp was organised on NH-44 at Anantapur continuously.  They continued the camp until more than 10,000 migrants were transported by the government.

Some people brought milk, bread and biscuits and some others brought fruits and water bottles.  Some families ventured to cook five or 10 kilogram of rice and dal and made food parcels and handed them over to the volunteers at the camp. There were no political speeches or resolutions and the donors and volunteers had a plain and simple motive to serve the people.  Donations were offered voluntarily.  Youth came forward to do the service. This humanitarian gesture from the people boosted the confidence of our comrades everywhere. They have certainly derived strength from the people.

RELIEF IN KAKINADA
The district CITU thought of involving all the unions in the district in the relief activity. They planned five camps 50 kilometres, apart along the highway in the district. 45out of the 46 mandal units have responded and took turns to conduct the camps. Since most of the migrants hail from the northern states, the anganwadi activists prepared thousands of phulkas and chapatis and gave them to the workers. Along with the trade unions, the teachers and other mass organisations too joined the relief activity. Building workers, who lost their livelihood during the lockdown, came forward to feed their fellow workers. A large number of unorganised workers of different streams have contributed to this activity. The chamber of commerce, timber depot owners and shopkeepers have come forward with their donations. The camps continued till the transportation of the labour was taken up by the government.

USE OF SOCIAL MEDIA
Peddapuram, under Kakinada district, is a few kilometres away from highway; CITU watched the plight of migrants who were moving along the highway. They immediately sent whatsapp messages calling for help through their social media group. They got nearly Rs 1 lakh in donations with which they prepared dry food kits along with cooked food for migrant workers. They arranged for about 10 two-wheelers and an auto to carry the material. It was a relief camp on wheels. This activity got wide coverage over social media and within no time, support came pouring in from various quarters. This activity is still going on and they now have funds that can sustain this activity for another week.

These experiences have given the party cadre many valuable lessons. It also proved that it is not a matter of financial resources but of a sense of solidarity among the poor, cutting across region, religion or language that found expression in our relief activity in the wake of a criminal neglect by the government, especially that at the centre.