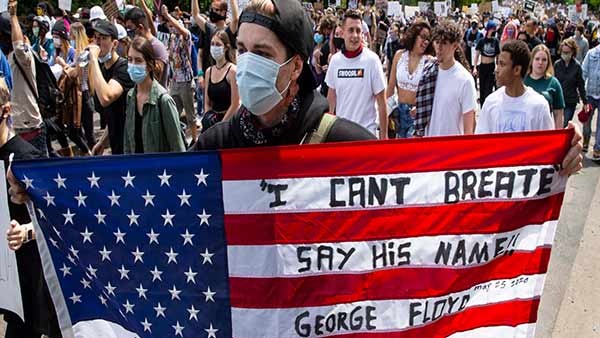 Raging Anti-racist Rage in the US

IN Minneapolis, US, after an unarmed and unresisting George Floyd, a 46 year old Afro-American, was killed by a white cop after being arrested for the non-violent, alleged crime of trying to pass a fake $20 note, anti-racist protests erupted. Minneapolis cops, with a reputation for violence, responded to the initial protest with tear gas, rubber bullets and use of force. Enraged by their reaction, the protests became more determined, leading to the torching of a police station, damage to stores and other businesses, and the blockading of streets and bridges. These protests spread to various cities and at the time of going to the press, they are being held in more than 75 cities in the US alone.

In racist US, police-related murders of unarmed blacks have tragically become a routine. According to a study based on the available data released few years back, police murders of unarmed black people take place on an average of one per day! The study points out that many districts in the country do not report such murders, the reason for which the study is partial. And if these districts too share the data, the numbers are certainly going to increase, exposing the underlying racial inequality and the active violation of human rights in the US.

Another startling fact that exposes the racial bias in the society and the US judiciary is the extremely low conviction rates of those police officers indulging in murderous acts. In spite of clear video and audio recordings available for various such ‘State murders’, only a tiny few are ever convicted. In Minneapolis, for example, since 2012, only one percent of racist attacks carried out by the police have resulted even in disciplinary actions. This only proves the point that various efforts to ‘reform the police’ have not yielded any results. Without reforming the entire society of its racist bias, one cannot expect the police to ‘reform’.

The failure of such efforts to ‘reform’ are glaringly visible now, as the city had appointed a black police chief who had earlier in his career sued the department for being “a cauldron of racist behaviour”. It also needs to be remembered here that many of the police violent attacks on blacks had happened when the US was governed by their first black president, Barack Obama, who in turn had appointed many prominent blacks to top-most positions in his administration. This only shows that such mere symbolism or catering to identities, does not help in cleansing the social rut that had set in.

A society that is governed on the basis of their declared ‘superiority’ over other countries and other nations, cannot be expected to erase the existing inequalities. Various US presidents and their administrations, over the time, have repeatedly propagated that US has the right to bomb, intervene and invade other countries because they are the ‘most democratic, most civilised, most developed and most advanced’ country in the world. They consciously promoted anti-immigrant positions and Islamophobia, which naturally accentuated the internal divisions in their own country. Afro-Americans, who have been living in the US for centuries together are targeted because of their skin colour and as ‘outsiders’. The historic roots of slavery are not completely erased.

With the country and the entire world in severe economic crisis, inequalities in the society are prone to increase. The depleting opportunities for employment, widening economic disparities and increasingly biased positions adopted by the State in favour of the rich and propertied classes are further accentuating these divisions. Racism, sexism and anti-immigrant hatred are quintessential tools used by the ruling classes for furthering their exploitation and maintaining their hegemony over the State. It is for this reason they try to keep the exploited classes – primarily the working class – divided and subjugated. In this background, the role of the police, an armed wing of the State is, to ‘terrorise, divide and make compliant the working class, ease the way for the workers’ exploitation at the greatest levels of profit possible’.

The Covid pandemic had added to the economic crisis in the present conjuncture. Even before the pandemic, 20 per cent of the entire black population was living in severe poverty. About 70 per cent of the black people live in severely polluted areas, another indicator of their poverty. A majority of them are employed in low wage, ‘dead-end’ jobs, live in cramped housing societies, with no access to many civic amenities. About one-fifth of African American housing was destroyed by the forces of so-called economic development and many of them were denied loans by banks because of their skin colour.

As a result of their poverty, African-Americans have less access to quality health care and 70 percent of them live in areas where there is a shortage of primary physicians. Because of their socio-economic conditions, they also suffer from higher rates of diabetes, heart disease, and lung disease, which made them more prone to Covid virus attack. Throughout the country, African-American deaths during this pandemic are nearly two times greater than their share of the population and in four states, the rate is three or more times greater. All these factors combined together have flared up the present protests against racial inequalities in the US.

The US State intended to suppress these protests through repression. About 16,000 National Guards were deployed in 24 states across the country. ‘Innovative’ policing methods are being used (if these are used in any other country, the US would have jumped up and shouted citing the violation of human rights). A truck was driven among the protesters to break them up in Minneapolis; a cop drove a speeding patrol car into the middle of a crowd of protesters in another city; another cop pulled down a man’s mask (worn to protect from the coronavirus) and pepper sprayed him in the face; another cop hit a man with the door of a car. These are all apart and above the usual methods of pointing guns, shooting, baton charging, firing tear gas (even inside those houses, where people hung banners supporting the protests), water cannoning, shoving people down violently, arresting and other ‘normal’ police methods.

Not satisfied with these measures, President Trump came out naked, baring his racial character. He admonished the governors of various states as being ‘jerks’ and warned them that they will be ‘overrun’ by the protests. In another rant, he vowed to send the military to curb these protests and threatened to invoke a two hundred year old, rarely used ‘insurrection act’. In a deliberate reminder, he used a phrase used by a Miami police officer against the civil rights protesters in 1960s, ‘if the looting starts, the shooting starts’.

In order to display his bravado, Trump, walked to St James Church near the White House and posed clutching a Bible, openly mixing religion with politics. This is his failed effort to cover up his cowardice, after the news appeared that he took refuge in a ‘bunker’ built inside the White House. For the first time in its history, all the lights of the usually lit White House were shut down, ironically displaying the darkness that engulfed the US.

Trump had threatened to ban the ‘antifa’ organisation, which he had accused for leading the protests. Many were surprised, because there was no such ‘nationwide antifa organisation’. Antifa, in fact, means anti-fascist. There are many broad groups formed in the US, since the days of Hitler to counter the threat of fascism. These broad groups are organised to counter the spreading influence of extreme-right ideas in the society and conduct protests against the attacks carried out by neo-Nazis and fascist groups. These groups are not bound together in any nation-wide structure. Trump accused ‘extreme Left’ and progressives for standing with these protests and branded all of them as perpetuating ‘domestic terror’.

The Secretary of Defence, Mark Esper advised the governors to ‘dominate the battle spaces’! Not to be left behind, Minneapolis governor used the famous ‘with us or not’ analogy: ‘If you are on the street tonight, it is very clear: You are not with us. You do not share our values’.

In spite of all the threats, rants and use of excessive police force, protests are continuing in many cities, violating the curfew orders. A heartening feature of these protests, which distinguish them from the civil rights movement of the 1960s, was the considerable participation of the whites. In a telling sign in New York, when the police stood in rows, protesters formed a line directly in front of them with white protesters standing in the front lines. This is the visual in many other cities too.

Martin Luther King had warned of four catastrophes – militarism, poverty, materialism and racism – that laid bare the ‘organised hatred, greed and corruption’ in the US. It is precisely these four catastrophes that are haunting the US society today and have flared up these protests. Many protesters are voicing their disappointment with the system, stating that it ‘cannot be fixed and needs to be replaced’. The protests that we are witnessing today in the US, might not immediately lead to the ‘replacement’ of the system. But the broad anti-racial unity and the courage and determination with which the protesters are resisting the State attacks, certainly inspires confidence that these protests are laying the bricks for the further radicalisation of the society.