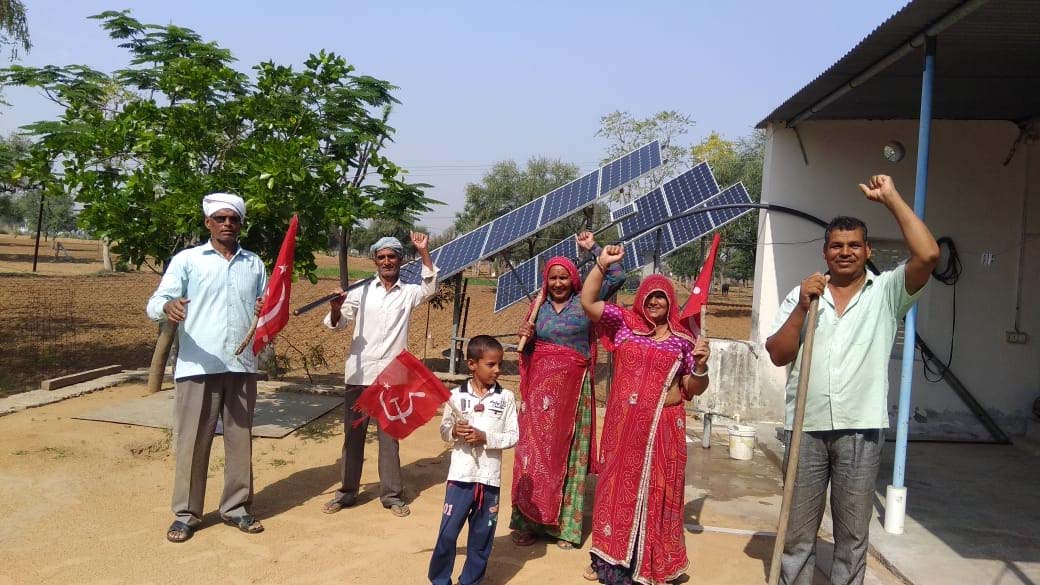 THE enthusiastic and single-minded participation of lakhs of peasants, agricultural workers and rural poor to observe Kisan Samman Divas on May 16, 2020, as per the call given by the All India Kisan Sangharsh Samanway Samiti (AIKSCC), the largest platform of peasant and agricultural worker organisations of the country, is a clear cut warning to the authoritarian Narendra Modi-led government. The protesters have demanded in one voice that either the prime minister retreat from the extreme rightist reforms on agriculture and the economy or face forthcoming relentless struggles by the peasantry hand-in-hand with the working class and all other toiling masses.

According to the reports received at the AIKS office, huge participation was witnessed in all states. The activists holding placards and posters with demands, shouted slogans against the apathy of the Modi government on the miserable plight of the peasantry and the working class and its pro agri-business reforms being unleashed under the cover of the coronavirus lockdown.

The campaign was organised in the context of abject failure of the union government as well as most of the state governments, with the unique exemption of the state government of Kerala, in extending a helping arm to the peasantry and the workers especially the migrant workers. The lockdown due to the Covid-19 pandemic has badly affected the harvesting and other agriculture operations. Peasants and agriculture workers were not allowed or have been unable to harvest the crops. Those who were successful in harvesting were unable to reach to the markets in towns and cities since there was no system of transportation in operation. Farmers have suffered loss of large quantities of the crop, especially of perishable items. The market demand also has come down and there was sharp decline of price.  This situation has led to the unimaginable loss of lakhs of crores of rupees’ investment and labour.

The kisan organisations had demanded to undertake immediate survey to estimate the losses and compensate the peasantry in actual terms but so far the government of India had ignored it absolutely.  In sharp contrast, during this period the Modi government had written off Rs 64,600 crore of nonperforming asset accounts of the willful defaulters like Vijay Mallya and Mehul Choksi.

The Modi government had to recognise and respect the contribution of the peasantry who are toiling to produce food for the entire people of the country braving the Covid-19 pandemic.  However, the government is not willing to compensate the peasantry and agricultural workers.

The AIKSCC had an online meeting to take stock of the situation and resolved to strongly demand the government a complete loan waiver for all the peasant and agriculture worker households, guaranteed procurement with MSP at C2+50% for all crops, Rs 10000 per month as income support during the lockdown period, real term compensation for the crop loss and job loss due to lockdown.

As part of taking the issues to the peasantry across the country, the AIKSCC had given the call for observing May 16, as Kisan Samman Divas. The call was to be observed for half-an-hour at 9 am with placards and sloganeering at home and agriculture fields.

The response received was highly inspiring. It was observed in almost all the states of India by the constituent organisations including the All India Kisan Sabha. One of the major features is the participation of women and young farmers in it. A huge number of photographs were received by the AIKS centre showing the expanse of the protest action.

As per the preliminary reports from 12 states covering Bihar, Odisha, Uttar Pradesh, Madhya Pradesh, Punjab, Uttarakhand, Himachal Pradesh, Jharkhand, Haryana, Andhra Pradesh, Gujarat and West Bengal, the protest was organised in 187 districts at 2057 centers with the participation of 22,595 persons.  Considering the reports to be received from the remaining state units of AIKS and also participation by all other member organisations of the AIKSCC, the estimate is that around three and half lakh farmers might have participated in this campaign.

AIKS congratulates all those who have ensured the success of this campaign.  One can take pride that even under the lockdown, the united peasant movement across the country is active in building resistance to protect the rights of the peasantry.

The protesters also raised slogans condemning the Narendra Modi government for announcing amendment to the Essential Commodities Act, 1955 to allow barrier free inter-state trade of agriculture produce.  It is an attack on the federal character of the country, eroding the powers of the state.

The AIKSCC has called for organising larger protest action on May 27, at block and district levels. It is expected that more participation will be there in that action. The struggle will be intensified till the government withdraws the pro agri-business reforms which will lead to further distress for the peasantry.