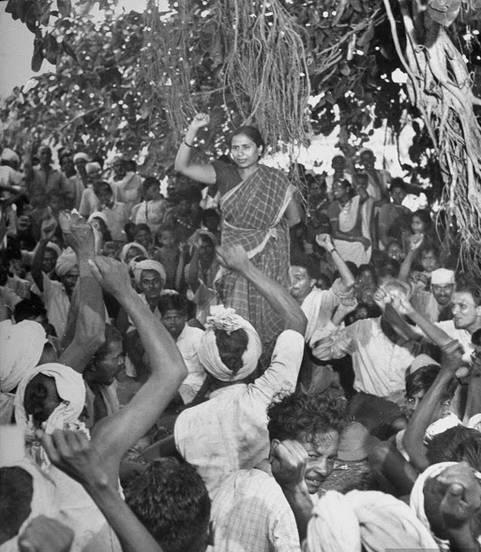 THE basic cause of the mass upsurge of the Worlis lay in their abominable condition of wretchedness and their suppression by the tyrant landlords. They had rotted in these conditions for over a century – conditions they had thoroughly hated, but fear and helplessness suppressed their raging fire. They lived with bitter despair and were anxious to end their slavery, but did not know how to do it. The entry of Kisan Sabha led by the communists filled this gap. Worli’s movement of liberation started in May 1945, when they raised the red banner of revolt against serfdom. Godavari Parulekar and her husband Shamrao Parulekar worked tirelessly to rouse and organise the Worlis.

The Worlis constituted the majority of tribal peasants who lived scattered in Umbergaon, Dahanu, Palghar and Jawahar taluqs of Thane district. The rich landlords and money lenders robbed land from them for paltry amounts. Subsequently they were settled on the land as tenants, paying half the produce as rent and had to do work on the landlords’ land without wages. They lived life as serfs. Some of the landlords owned grasslands and worked as forest contractors, employing tribal peasants as labourers on paltry wages. Veth or forced labour was widespread. In the slack season the tribal peasants turned to the landlords for khwati or paddy loans for which they had to pay interest in kind, ranging from 50 per cent to 200 per cent.

The Maharashtra Kisan Sabha held its first conference in 1945 at Titwala village in Thane district. Kisan Sabha workers planned to mobilise representatives of the peasants from all the taluqs in the district. During the course of campaigning for the conference, they had for the first time come into contact with the Worlis of Umbergaon taluk in December 1944.

In those days the landlords’ men and local government officers were like kings in their domains. The Worlis were afraid to speak freely in their presence. When such people were found in one of the meetings organised by Kisan Sabha, leaders sternly asked them to move out from the meeting. They had to go away with bowed heads. This act gave courage to Worlis to speak freely and express all their feelings about their exploitation and conditions. They promised to send a few representatives to attend the conference at Titawala, but laid a condition that one of the Kisan Sabha workers must stay in their midst to help them after the conference.

Fifteen Worli representatives from Umbergaon taluq attended the Titwala conference. Mobilisation of peasants from all the districts in Maharashtra inspired and transformed the Worlis. They no longer trembled in the presence of their oppressors, but started defying them. They had carried with them some Red flags which they felt would serve as their guide, friend and philosopher.

Kisan Sabha leaders, during the course of campaigning for the conference, helped the Worlis resist the landlords demand for forced labour and to stop it. These victories easily won in the first round of struggle, roused the spirit of resistance and instilled confidence in the Worlis that they could easily defeat their enemy. A new awakening and consciousness was born.

The Kisan Sabha conference adopted an immediate programme of abolishing serf tenure and forced labour. It formulated four main and simple slogans: (i) do not cultivate the private land of the landlord unless he paid the daily wages in cash; (ii) do not render any free service to the landlord; (iii) resist the landlord if he assaults you and (iv) you must all unite.

The resistance to the landlords’ demand for forced labour commenced the moment the conference concluded. The slogan and the message of the conference reached all the nooks and corners within 24 hours of its conclusion. The Worlis forged hundred per cent unity. The resistance spread so swiftly and gathered strength so rapidly that within three weeks, forced labour became a thing of the past.

With this victory, the Worlis proceeded to abolish serf tenure. They refused to cultivate the land of the landlords free and demanded the rates of wages fixed by the Kisan Sabha. This offensive gathered the strength of a whirlwind in the whole of the Umbergaon and the landlords were swept away. Serf tenure was abolished.

The news of the victorious march of the Umbergaon Worlis crossed their borders and reached Dahanu. Without waiting for the Kisan Sabha, they launched their movement by holding mass meetings daily. When the Kisan Sabha workers went there, they found to their surprise that the whole area was in the grip of a gigantic mass upheaval.

Kisan Sabha raised another demand of a minimum rate of Rs 2.50 for cutting 500 pounds of grass. Thousands of acres of land were under grass and the landlords used to make a fortune in grass trade. As the Worlis refused to cut grass, the landlords tried to disrupt the movement. They spread the rumour that goondas were brought to break the meeting to be addressed by Godavari Parulekar. In fact no such meeting at all had been planned by the Kisan Sabha. Cheated by the landlords, thousands of Worlis assembled. Armed police arrived at about midnight on October 10 and opened fire on the peaceful gathering of the Worlis from the roof of a moving motor van. The police continued to open fire at intervals indiscriminately and in all directions till 3.00 pm on October 11. Five Worlis were killed and a large number injured.

This episode was a thrilling exhibition of the reckless defiance of death by the Worlis, their loyalty to the Red flag and the birth of a rare courage in them. For 15 hours, they defied bullets showered on them. For 15 hours, they had protected the Red flag which they had hoisted, by shielding it with their bodies. As the police van used to pass by the spot and the police opened fire, they crowded round the Red flag. They thought that the police were aiming to shoot the Red flag and they felt it their sacred duty to protect it at the cost of their lives. Firing did not succeed in dispersing the meeting. They dispersed only when a Kisan Sabha worker rushed to the spot and explained the landlord’s deception. When they realised that they had been deceived by the treachery of the landlords, they returned home full of bitterness against the landlord and the government.

As soon as the significance of the Worli’s movement dawned, the attitude of imperialist bureaucracy changed from non-intervention to ruthless repression. The provincial Congress government was also scared by the growth of communist influence among the tribal peasants. It sided with the landlords and tried to suppress the movement by unleashing a reign of terror. Meetings, processions and assemblies of five or more persons in the area were banned. The administration externed all the communists from the area. Some of the methods employed by the police were as crude, brutal and matchless as those employed by the Nazis. Undaunted, the Worlis marched ahead.

In early 1946, Kisan Sabha conference took the decision that peasants would pay only one year’s rent, without any arrears and also demanded an increase in the wages. The Worli movement reached its climax in the autumn of 1946 when the time of grass cutting came. Apart from the landlords who owned grasslands, there were forest contractors who employed tribal peasants on cash wages. They refused to concede these demands. The Kisan Sabha called for a strike.

The strike which had lasted for about a month showed no signs of weakening. Timber merchants and landlords, faced with heavy losses and anxious for a settlement, agreed to the demands. The strike ended on November 10, 1946. It was a great victory for the Worlis. They had successfully fought and met the offensive of the landlords, timber merchants and the oppression of the provincial Congress government. The Worlis emerged stronger, more united and with a better understanding as to who were their real friends and who their enemies. They realised that organisation is their only strength.

The experience of struggles rapidly transformed the Worlis. Their transformation had been so radical that they became a new being. They had developed a thirst for knowledge. They became very keen to know all about socialism and Soviet Russia. It was the landlord's campaign of slander which roused this desire. The struggle had made them conscious of their rights in the economic domain and also made them understand the value of civic and political rights.