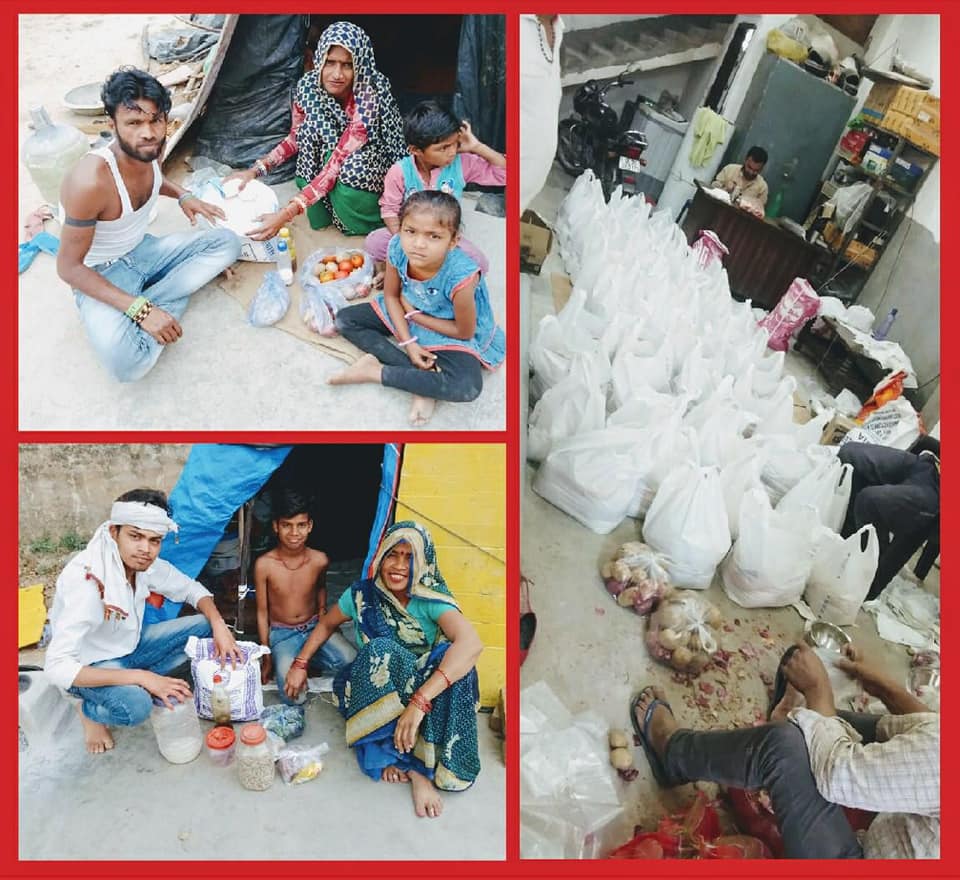 CPI(M) with the People in Combating this Pandemic

THE relaxation of restrictions from May 4 onwards, even as the national lockdown continues till May 17, as was widely anticipated, led to a record peaking of the Covid positive cases and consequent deaths. On May 5, India recorded 3875 new cases in a single day spike, 2.5 times higher than the daily average increase over the past week. The highest number of deaths recorded are between May 4/5 - 194. This is the highest single day death toll recorded since the outbreak of the pandemic.

We have been repeatedly saying that a mere lockdown is not the answer for containing the pandemic and protecting lives. A lockdown postpones a severe outbreak form occurring but its prevention can only happen if this period is properly and scientifically used for testing, then tracing contacts of those who tested positive, isolating such people and quarantining them, while establishing the support infrastructure to look after the needs of the people during this period.

This is the model that the Kerala state government under the leadership of the Left and Democratic Front had undertaken which has now gained international recognition as one of the most effective and scientific ways in meeting the dangers of this pandemic i.e., test-trace-isolate-support.

Unfortunately, despite being forewarned, given the lead time we had before the outbreak of the pandemic in India, this has not led the country under this BJP central government to prepare ourselves  to be forearmed. Our testing rate continues to remain one of the lowest in the world (864 per million. Compare with Spain 41,332 per million. As of May 5, 2020).

The manner in which the lockdown was suddenly announced giving a mere four hour notice which did not allow either the state governments or the people  to prepare for such a prolonged situation created conditions for crowds of migrant workers surging together to return to their far away homes. This, in a sense, defeated the purpose of maintaining a physical distance so critical in containing the transmission of this deadly virus.

The support infrastructure that was required to look after the needs of the people who lost their jobs or are going hungry was not put in place. We have been demanding from the very beginning that a sum of Rs 7,500 monthly, for a period of three months, be transferred to all those who do not come in the income tax bracket. The 77 million tonnes of food grains currently stocked in central government godowns should be used to distribute free rations to all those who are going hungry.

The central government has refused to come forward to do this despite there being no shortage of resources. Hundreds of thousands of crores are being collected in the name of fighting the pandemic by a trust that carries the Prime Minister’s name. This money would be more than sufficient to create the support infrastructure that can play an effective role in containing the pandemic.

The worst is the manner in which this central BJP government is dealing with the elected state governments. First the GST dues to the states have been kept pending for the last two quarters of the financial year. This is starving the states of resources to meet the challenge of the pandemic. The states are on the frontline of this battle. Having declared a national lockdown without consulting the state governments, now the states are being asked to provide for and look after the lakhs of migrant workers. The centre has so far not dispersed any money from the special fund to which it is forcing all government employees to part with a day’s salary and cutting the salaries in the name of battling the pandemic.

The fiscal package announced by the central government of Rs 1.7 lakh crore has more than half of this amount from rehashed old central schemes. Even this total amount is less than 1 per cent of our GDP. This must be increased to at least five per cent of our GDP i.e., around Rs 10 lakh crore and the state governments must be liberally assisted with finances to meet this challenge.

In the absence of this, the only avenues left for revenue raising by the states are by hiking the prices of petroleum products and alcohol.  This will only put further burdens on the livelihood conditions of crores of our people making them more vulnerable to fall victim to this pandemic.

Worse, the state governments are now being asked to pay for the special trains that have been started by the Indian Railways to transport migrant workers. This is criminal. This amounts to a financial emergency as contained in Article 360 of our Constitution. This is seriously undermining our capacity to effectively combat this pandemic.

The states must be immediately assisted financially. Instead, the central government comes up with flimsy explanations to claim that 85 per cent of the cost of running the special trains is being paid by the Indian Railways. The railways are a system of mass public transport whose costs cannot be calculated on the basis of profit and loss. Every civilized country in the world runs public transport as a service that contributes to the overall wellbeing of the people and propels economic growth.

On May 5, the Supreme Court of India was hearing public interest litigation on the issue of migrant workers being asked to pay for their return travel home. The central government declined to give the supreme court a break up of the share of ticket fares on what the centre and states have to bear to transport the migrant workers back home. It also declined to submit before the court the amount of money being taken from the workers. India’s solicitor general admitted before the three judge bench that he had “no instructions” to reveal the details. Such is the duplicity of this BJP central government, where it relies on propagation of untruths and disinformation.

THE BJP’S SINGLE-MINDED PURSUIT OF ITS AGENDA

While abdicating the responsibility for people’s welfare and health concerns during this pandemic, the central government is single mindedly focused to carry forward its agenda. While crores of people have been pushed into misery and hunger, this central government, during this period of national lockdown, waived off a sum of Rs 68,800 crores of loans taken by industrialists close to the Prime Minister. Such is the merciless crony capitalism that they claim to have no money to look after people’s hunger or their travel home but they have money to allow their cronies to get away looting people’s monies that are deposited in banks.

During the period of the lockdown the quest for profit maximization by the capitalists and corporates continues to be criminally pursued. Reliance has reported an increase in its profits during this period by 17.7 per cent. At the global level ten top US billionaires have reportedly added $208 billion to their wealth. On the other hand, crores of workers have lost their jobs and more are subjected to salary cuts. The CMIE estimates that, since the national lockdown began, nearly 14 crore people have lost their jobs and joined the ranks of the unemployed. These are the levels of inhuman exploitation under capitalism.

While claiming that there are no resources, while refusing to increase the fiscal package even when countries across the world are giving massive packages of fiscal stimulus and looking after the people – Japan for instance has announced a package of nearly 20 per cent of its GDP. USA has announced 10 per cent and promised to increase it further. But in India we continue to remain at less than one per cent of our GDP.

At the same time, this central government has cleared the proposal for the construction of a Central Vista which includes a grand new house for the prime minister costing over Rs 20,000 crores. So there is money to carry forward their agenda. Additionally, the special fund, PM Cares, has amassed a huge amount. Not a paisa of this so far has been spent to meet the people’s needs or the needs to combat the pandemic. This fund is neither auditable by a government auditor nor is there any transparency or accountability.

The Indian economy was already ruined before the outbreak of the pandemic. Having done this, this BJP central government now uses the pandemic as an excuse for our economic problems and instead of solving them keeps focused to advance its agenda.

The ruling classes have always used the outbreaks of health emergencies for strengthening their authoritarian control over the government and the people. This is happening more nakedly, clearly seen when all expressions of dissent against this government are being booked under draconian laws like the UAPA and the NSA. The activists, students and prominent people who participated in the constitutionally guaranteed peaceful protests against the CAA/NPR/NRC are being arrested and jailed. Such trampling of the democratic rights of the people and such witch-hunting of all those who express dissent is being strengthened during this period.

The worst is the single-minded manner in which this BJP government is pursuing the agenda of advancing the RSS project of converting the secular democratic republic of India into a theocratic fascistic State. The hatred that is being spread against the Muslims, the minorities and the manner in which they are being targeted as the cause of the pandemic, is to polarise deeper the society on communal lines. The CPI(M) Party programme notes this aspect in para 7.14 of the dangers of BJP, when being in control of State power advancing the RSS fascistic agenda.

It is clear therefore that using the battle against the pandemic, the BJP central government is intensifying the exploitation of the people to generate greater profit maximisation for the ruling classes and the crony capitalists. Labour laws are being changed with impunity. The eight-hour working day is being increased, in many states, to 12 hours. There are massive cuts on the wage and savings of the workers and employees.

At another level, this situation is being used to strengthen the authoritarian control of the central government. This over centralisation is robbing the democratically elected legitimate state governments of the basic rights, in the federal system as contained in our Constitution. The states are being forced to take up the responsibility for meeting the people’s needs while combatting this pandemic. The central government refuses to even pay back the legitimate dues to the states leave aside financially assisting them.

By targeting social activists, prominent personalities of the anti-CAA/NPR/NRC peaceful agitations and curbing any expression of dissent with an iron hand, this BJP central government is advancing its own agenda, thereby undermining the united fight of India and its people against the pandemic.

Finally, the intensification of this communal polarisation and the widespread surge of hatred against the minorities is again undermining the strength of the united struggle that all of India must conduct in combating this pandemic. Many countries in the world have reacted against the rise of such Islamophobia. This, apart from alienating India from large number of countries, weakens our fight against the pandemic.

It is therefore incumbent upon us, the CPI(M), to rally the maximum sections of people, political parties, mass organisations and people’s movements to put pressure on this government to implement a minimum programme to look after the people’s needs and concerns while at the same time to revive and rebuild the Indian economy. The roadmap for the economy, in this situation of battling the pandemic, has been put in the public domain by the CPI(M). This must be the focus of our campaigns and outreach to the people.

Many units of our Party at all levels all across the country continue to remain active in providing some relief to the crores of people who need it. This shall continue and the CPI(M) shall remain with the people in meeting the grave challenges of today.