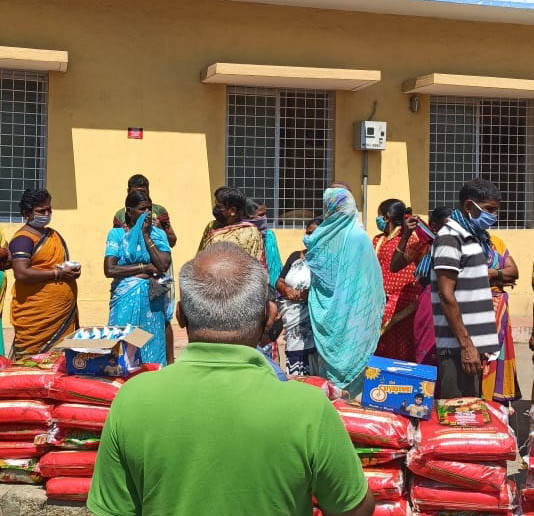 THE first one week of the lockdown in India, out of the declared three weeks, has once again displayed the callous and lackadaisical attitude of the BJP led Modi government towards the poor workers of the country. The sudden announcement of the lockdown, giving hardly a few hours’ time for the people to prepare themselves for it, and without the needed preparation by the government to minimise people’s, particularly the poor unorganised and migrant workers’ sufferings, led to utter chaos in many states. Daily wage workers, migrant workers, workers in small eateries, hotels, shops and other such establishments, street vendors and many such others were left in the lurch. Suddenly they found they had no work, so no income and so no food.

Immediately after the lockdown was announced, CITU independently and also jointly along with other central trade unions wrote to the prime minister demanding immediate announcement of ‘strong statutorily enforceable measures to arrest and put a ban on the ongoing spree of retrenchments, wage cut, forced unpaid leave etc’, particularly of ‘the contract/ casual/ temporary/ fixed term workers in various establishments, particularly in the private sector’. The central trade unions have also pointed out that ‘mere appeal by the government or advisory by the labour ministry is not at all working to prevent loss of employment and earnings in the process of lockdown’.

On the second day of the lockdown itself, the central trade unions warned the government that unless a concrete package with ‘income/livelihood support for the most vulnerable 40 crore informal sector workers to deal with these issues’ is announced, ‘anxiety of no work and no food amongst the toiling masses will create problems in dealing with Covid-19 pandemic’. The demand for concessions and debt moratorium for the MSMEs, small retail traders, street vendors/self employed was also raised by the central trade unions. The central trade unions estimated that the package to address the immediate concerns related to the corona pandemic would cost not less than Rs 5-7 lakh crore, which is less than the tax and other concessions given by the government to the big corporates as ‘incentives’ for investment, which has not been forthcoming. They expressed their shock that the government’s economic taskforce headed by the finance minister announced extension in deadlines for filing IT returns, GST, about TDS or the cases under the Bankruptcy Act etc that benefit mainly the defaulters among the big business but was totally silent on providing any relief to the working people of the country. The finance minister announced a Rs 1.7 lakh crore package, which is highly inadequate.

Immediately after the lockdown, CITU issued a circular to all its committees to extend all possible help to the unorganised sector workers, particularly the migrant workers. It also called upon its committees and members to ensure that the wages of the domestic workers who cannot attend to their work due to the lockdown are not deducted.

The working class all over the country, including in states where the CITU and the trade union movement itself were not strong, responded magnificently to support their brethren in distress, particularly the migrant workers. Almost in all states, the CITU committees, from the state, district to lower level cadres responded with due seriousness. The major problems that were common all over the country were the loss of jobs, loss of income, loss of shelter and lack of food and other essentials.

In Delhi NCR area, where thousands are stranded, food packets/ration is being supplied to many migrant workers. CITU Delhi-NCR state committee has given a fund call for meeting the requests for help that were pouring in. It is providing a basket of food and essentials for a family of five for a week that costs Rs1200. The call is being well responded. Food and essential items have already been distributed to hundreds of migrant workers from West Bengal, Jammu and Kashmir etc. In three places, community kitchens for a few are also being run.

In Karnataka, the state committee of CITU has taken initiative to organise 10,000 food kits for around a week for migrant workers of unorganised sector in Bangalore and adjoining areas, each kit containing some essential food and other items that cost Rs 800 each. The committee got very good response to its call for funds and within a couple of days was ready to distribute 2000 food kits. Relief efforts are going on in other districts as well.

In Gujarat, the Bhavanagar district committee distributed one week's ration to a section of migrant workers covering 1,053 persons. CITU committees in some places took the help of gurudwaras and NGOs in providing food. The CITU in the state also helped around 60 migrant workers from Bihar who lost their work in Surat and had no food. In Lucknow in Uttar Pradesh, the CITU committee provided 10 kg rice, 3 kg dal and 1 kg salt to ten families of construction workers. The Kanpur, Saharanpur, Allahabad and other district committees, with their limited resources, are also making efforts to provide essential food items to the needy unorganised sector workers.

The Jammu and Kashmir state committee of CITU is also continuously in contact with the migrant as well as local contract workers working in railway loading and unloading, BSF Organisation and in different factories. They have informed the workers about the government directions related to payment of wages, job protection during the lockdown period etc and representing to the authorities wherever they were not being implemented. They have also pressurised the contractors to supply food materials to the contract workers.

In Haryana, CITU district committees are conducting surveys of migrant workers, registering them and providing assistance with the help of local people, administration and NGOs. A group of migrant workers from UP were supplied one week's ration at Kaithal district. Hundreds of workers from West Bengal and other states stranded in Gurgaon were provided food. Similar initiatives are taken in Faridabad and other districts also.

In Kerala, elaborate arrangements have been made throughout the state by the CITU along with other mass organisations to organise food and relief for the migrant workers who are called ‘guest workers’ in the state.

Migrant granite workers from Uttar Pradesh working in Khammam in Telangana, were given food materials by the district committee of CITU. Migrant workers from West Bengal were given help in different places in Hyderabad. The district committees are visiting the areas where migrant workers are staying to find out their problems and addressing them including by making representations to the labour department to ensure that the government’s directions for payment of wages, etc are implemented.

In Tamil Nadu, CITU district committees particularly those in and around Chennai have been helping the migrant workers from different states including Jharkhand, Odisha, West Bengal, and also students travelling through Chennai to West Bengal in various ways including providing food, facilitating and providing accommodation, talking to the employers and labour department about continuing their employment, payment of wages etc.

CITU, All India Kisan Sabha and All India Agriculture Workers’ Union, have together decided to open community kitchens and make arrangements for distributing food to the needy workers in as many places as possible all over the country.

The state committees of CITU are also coordinating among themselves to identify the needy migrant workers and extend help to them. In addition, the CITU cadres in many states are also putting pressure on the governments to register the workers, provide ration, open community kitchens, shelters etc for the migrant workers. They are also engaged in helping the workers and others in accessing essential services like transport, cleaning etc.

Scheme workers including ASHAs, second ANMs and other scheme workers in the health services, anganwadi workers have been engaged in providing health services, conducting surveys etc; the workers engaged in other essential services like cleaning, transport, supply of food etc are also discharging their responsibilities. But till now most of these workers have not even been provided minimum protective equipment.

CITU committees are making best efforts to extend support in all possible ways to the migrant workers, despite the many difficulties due to the lockdown, curfew etc including the hurdles created by the governments, particularly in the BJP ruled states in issuing curfew passes to CITU activists, the limitation of resources in terms of funds and cadres etc. They are able to carry out this important work because of the huge sense of solidarity shown by the workers and common people and their help and support in various ways.

Along with these activities, CITU is putting pressure on the governments to register the workers, provide ration and open community kitchens etc. CITU committees are also making all efforts to implement the announcements made by various governments for ration, financial assistance etc. They are also fighting the retrenchments, non payment of wages and other problems. In many states, the workers engaged in health and essential services like transport, cleaning, food supplies etc. are not even given basic safety equipments.

But the attitude of the government, both the government of India and some of the state governments is appalling. The migrant workers are treated as criminals. They are being lathi charged and cases being booked against those who were forced to walk hundreds of kilometres to reach their native places for lack of income and food and shelter, on the pretext that they are violating the lockdown order. In Uttar Pradesh, migrant workers in a group are sprayed disinfectant on the highway to sanitise them. In Haryana, the government wants to put them in prisons. Most cruel is the attitude of the BJP government led by Modi who did not take the conditions of the poor workers into consideration at all and made no arrangements to ensure food and shelter before announcing the lockdown, forcing them into starvation and making lakhs of workers suddenly homeless. The Telangana state government has issued an order to deduct 50 per cent of salaries of all employees and pensioners as well; even the poorly paid outsourced and contract employees are not spared, they too have to undergo 10 per cent reduction in their salaries. The deductions will continue ‘until further orders’.

The drastic cut down in public health infrastructure, in public distribution system, in welfare expenditure for the people, under neoliberalism, further aggravated by the crisis that has been continuing for over a decade, has made the coronavirus pandemic even more serious, in India as well as in many countries in the world. Superstitions and unscientific thinking largely promoted during the last few years have also contributed to lack of understanding of the importance of social distance and avoidable panic.