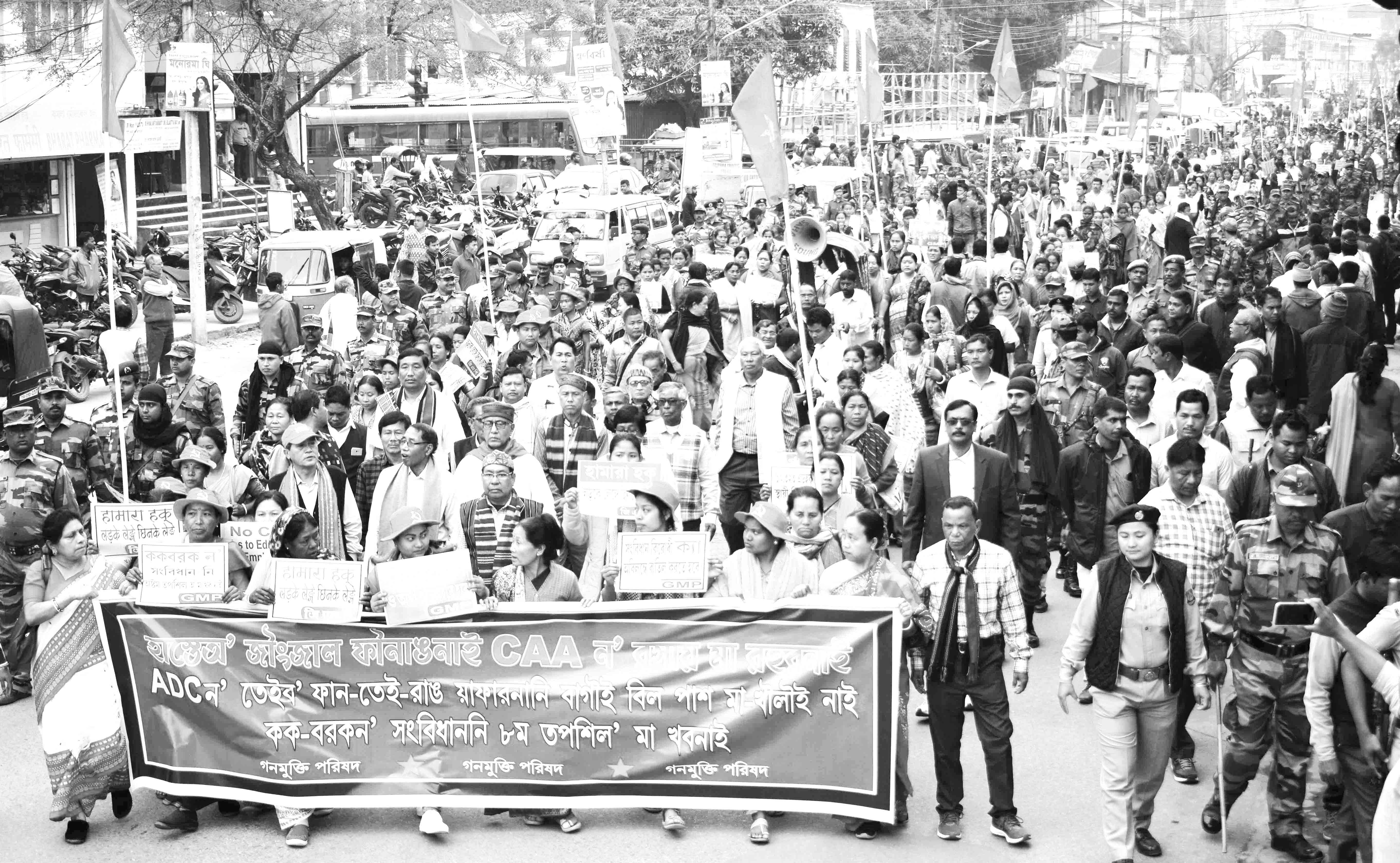 TRIPURA: Huge Rally of GMP: A Clear Warning to BJP

THE hills came down to Agartala on Saturday, February 8, as thousands of tribal people hit the streets of state capital at the call of Tripura Rajya Upajati Ganamukti Parishad (GMP).

The rally was held as a prelude to the upcoming central conference of GMP and to press its 18-point charter of demands.  The demands included immediate repealing of CAA, withdrawal of NPR and NRC,  inclusion of Kokborok in the 8th schedule of the constitution, more power to the TTAADC and reestablishment of peace and democratic atmosphere in the state.

The rally started from Rabindra Bhavan at 11 am. But people started their journey for participating in the rally, in wee hours of the day from far-flung tribal hamlets of the state. Daksharam Reang from Khantalang village bordering Mizoram, started at 3 am.

The rally was led by leader of opposition Manik Sarkar, GMP president Jitendra Choudhury,  GMP general secretary Radhacharan Debbarma and others.
Slogans reverberated across the city as the rally walked through the busy streets of Agartala. People watched with awe as GMP made its first show of strength since the assembly elections.

GMP vice president and CPI(M) Central Committee member Aghor Debbarma in his speech said, all over the country struggle against Modi government is intensifying on the issue of CAA. GMP too will join in the democratic protests and make it stronger. This struggle will be of people from all sections.  People in Tripura and all over India are joining this struggle fearlessly against the authoritarian rule.  People will change the situation.

GMP president Jitendra Choudhury sent a message to the chief minister of the state.  He said, "This is a warning for you. Change your policies, reestablish peace, restore democracy. Don’t try to destroy Tripura by inciting hatred among Bengalis and tribal people.  If you don’t pay heed to this warning, people will lodge FIR against you, frame chargesheet and you will be tried in the court of the masses.”

GMP general secretary Radhacharan Debbarma said today's rally is not aimed at pulling down this government but to awake it from its slumber. Future struggles for life and livelihood will be fought on the united strength of people of all religions, races and ethnicity.  So to preserve this unity, divisive CAA has to be resisted at any cost.

AIKS state secretary Narayan Kar said, the only way to protect our legitimate rights is through

unified resistance of Hindus,  Muslims, tribals and Bengalis.  Only on the unified strength of the masses this BJP-IPFT government can be challenged.

Joint secretary of GMP Naresh Jamatia said, the state and the ADC is deprived but the MPs, ministers are silent. People must learn from the experience and take a pledge to reelect Left Front in the ensuing ADC elections.

Later answering the journalists, CPI(M) Central Committee member Badal Chowdhury said the tribal people were misled during the last assembly elections. Since then the people there are in utter distress. Today they have come down to Agartala to give a befitting reply to that betrayal.  This rally will be the turning point against this government.