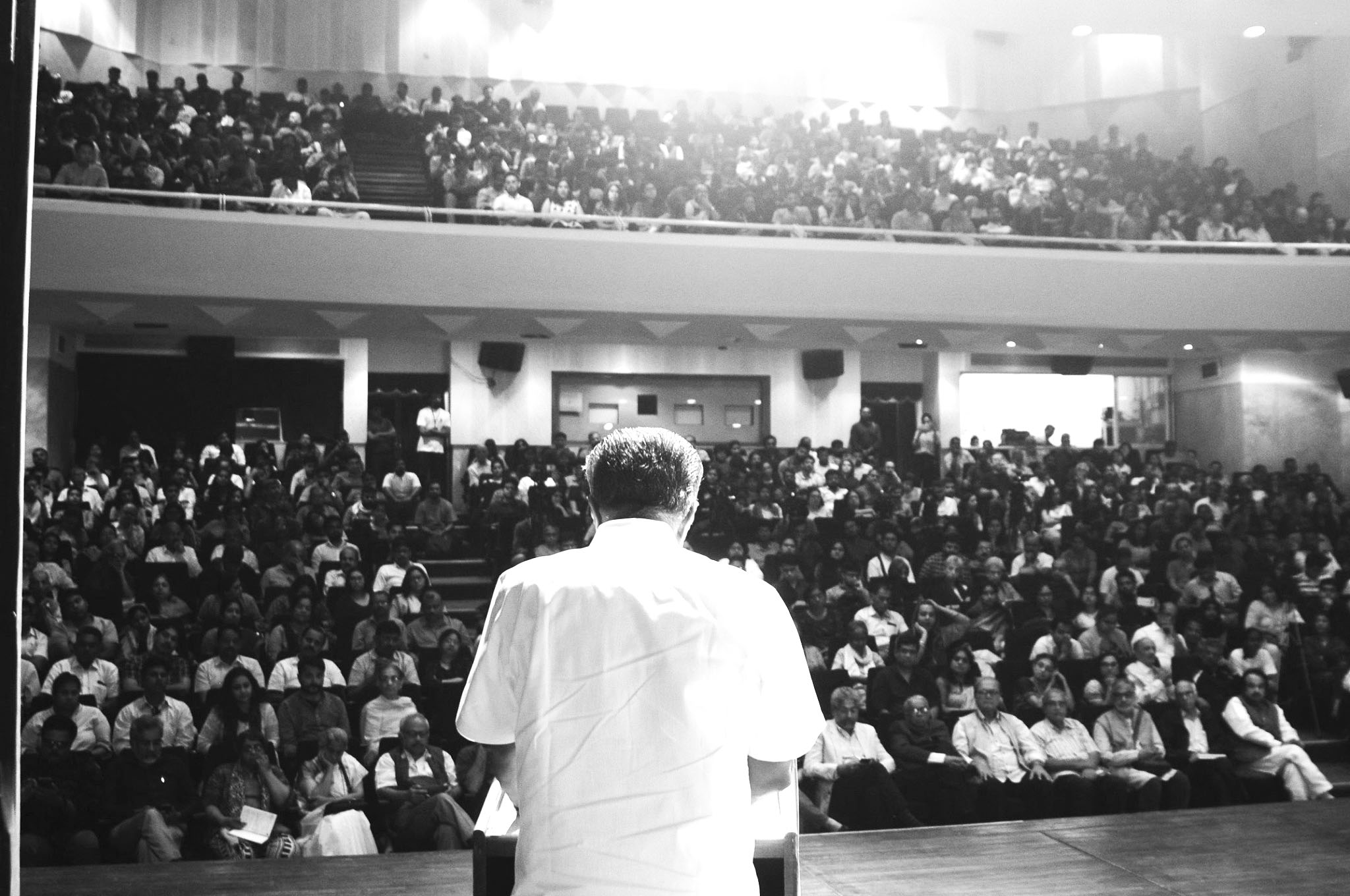 In Defence of Secularism and Pluralism: The Mumbai Collective 2020

THE constitution of India is the foundational document that guides our country's polity. For every Indian citizen, the constitution secures justice, freedom of thought, expression, belief, worship and faith as well as equality of status. The constitution was the outcome of our national movement for independence from colonial rule that involved people from all strata of Indian society. It is a matter of great concern, however, that many of these constitutional guarantees available to Indian citizens are threatened in the recent period. Over the last six years, we have seen an unprecedented rise in the spread of divisive and communal ideologies. This phenomenon has had covert and overt support from the central government and a set of state governments. Individuals and organisations that have dissented with these ideologies have been targeted for attack and have even been killed.

The Mumbai Collective was established in March 2016 by a concerned set of citizens in Mumbai who were concerned that the ideals of freedom, pluralism, inclusion and tolerance, as secured by the Indian constitution, were under threat in India. The immediate context for the first edition of Mumbai Collective was a series of attacks to the constitutional values, which included the institutional murder of Rohith Vemula at the Hyderabad Central University (HCU) and consequent student protests, the attack on progressive student groups of the Jawaharlal Nehru University (JNU), the attacks on Muslims in the name of love jehad, ghar wapsi and beef ban, the murder of rationalists Narendra Dabholkar, communist leader Govind Pansare and writer            M M Kalburgi. The next edition of Mumbai Collective was organised in December 2017 and the third edition in March 2019.

Since March 2019 when the last edition of the Mumbai Collective was organised, the NDA government came back to power with a huge majority in May 2019 and the political atmosphere has decisively turned against the interests of the toiling masses and in particular for the dalits and minorities. The government engaged in unilateral action by amending the Article 370 of the Indian constitution and reducing the state of Jammu and Kashmir as union territories. The enactment of the Citizenship Amendment Bill in December 2020, has been met with a wave of protest and struggle across the country that is in many ways unique and unprecedented. Over the past few months, protests led by women, students, and ordinary citizens in defence of the constitution and against communalism have become a lightning rod for political action against the onslaught of the right-wing central government. Various democratic and progressive forces in the country are also seeking an answer to the question of what these protests mean and whether it could it amount to a concerted political action. These questions and the political situation in the country, formed the immediate context for the events of the Mumbai Collective held on February 2-3, 2020.

The clearest response to these questions at the Mumbai Collective, was captured by the address of chief minister of Kerala, Pinarayi Vijayan, in his special address on “The National Struggle against Communalism”. Pinarayi Vijayan stated that, “In the past, our movement was against the colonisers. In the present our struggle against communalism is a movement against those who stood with the colonisers … This is the struggle to protect our secularism, and to defend our constitution. The people united, shall always be victorious. We shall fight, we shall win.” This message, along with that of several others at the Mumbai Collective, called attention to the need for such broad platforms in the country to promote the ideals of freedom, secularism, and democracy.

The collective put into perspective the events of the past few years that saw a sharp rise in the communal and majoritarian assault on our constitutional values. This was most emphasised by the opening address at the collective by N Ram and Gopal Guru, who underscored the effort to establish a Hindu Rashtra as being central to the worldview of the Hindutva-authoritarian regime in our country. Within the past year, the abrogation of Article 370 in Jammu and Kashmir, and the extraordinary clampdown on the democratic rights of the people of that state, was perhaps the most brutal and naked display of this worldview. Md. Yousuf Tarigami (former MLA of the J&K legislative assembly) highlighted the plight of the ordinary citizens of Jammu and Kashmir (now the erstwhile state of J&K) in his conversation with journalist Raghu Karnad, titled “What’s happening in Kashmir?” The draconian measures of constraining freedoms through communication shutdowns in J&K and the rest of the country, was addressed by Vickram Crishna (technologist and activist) in his talk at the Mumbai Collective on “Internet Shutdowns”.

The session on “India’s Deep State” saw journalist Siddharth Varadarajan explain how some elements within the Indian State have consistently suppressed the voices of citizens and allowed security forces to operate with impunity in J&K and other states. Subhashini Ali (former MP) spoke on the complicity of the Uttar Pradesh state government and the violence unleashed (even on children) by the state police as a response to the protests on minorities in the last few months. The role of the media, which has capitulated and become a lapdog of the central government was pointed out by journalist Siddharth Bhatia.

The collective prominently engaged with the debates on the Citizenship Amendment Act (CAA) and the central government’s promise of a nation-wide National Register for Indian Citizens (NRIC) as steps towards realising the communal agenda of the Hindutva forces. In a session titled “CAA and Constitutionality”, the insecurities faced by Muslim minorities in the country was underscored by Harsh Mander (former Indian Administrative Service officer and founder of the Karwan-e-Mohabbat), when he stated that “The RSS and BJP see this as completing the unfinished work of the partition. I think what we are seeing today is an opposition to our freedom struggle. Please understand in the end when we don’t show the documents, I, as a non-muslim, will not face the detention centres…(Muslims) are the ones who will face the oppression because this law is designed to oppress them”. The session also saw advocate Abhinav Chandrachud, point out the inconsistent, unconstitutional, and logical flaws within the CAA 2019.

In the session titled, “Hum Kagaz Nahin Dikhayenge” journalist Sangeeta Barooah Pisharoty, emphasized the necessity to understand that the CAA-NRC is an attack on the Indian federal structure and against the aspirations of the people of the north-eastern states of the country. Prominent civil rights activist and advocate, Mihir Desai underscored that the constitution of India ultimately belonged to its people and was not simply a document concerning the central government and the Supreme Court of India. The chair of the session, Wandana Sonalkar added that the constitution is the criterion through which we judge whether even the laws brought by an elected government are to be supported or not.

The insidious nature of the Hindutva project and its attack on the public sphere was brought to the fore by sessions across the collective. Scientists M S Raghunathan and Abhijit Mazumdar spoke on the attack on “Reason, Freedom of Speech and the Idea of India”, which was chaired by Tejal Kanitkar. The cultural politics of RSS and its opposition to the ethos of liberty, equality, and fraternity was spoken about by Swati Dyahadroy and Bhanwar Meghwanshi in a session chaired by Subodh More. Writer Tony Joseph, in a session on History and Hindutva (chaired by T Jayaraman), underlined the manner in which Hindutva forces constantly try to rewrite history and obscure radical breaks in Indian history by equating myths with reality.

The slowdown of economic growth, agrarian distress, the rise in unemployment, and the general crisis of the economy, was highlighted by economist Jayati Ghosh. Of particular note was her assessment of how the recent budget through sheer statistical skullduggery and false assessments represented an outright lie to the people of India. The chair of the session, economist Ritu Dewan, also spoke of the attack on scholarship and fund cuts to students from marginalised communities that were proposed in the budget.

The message of hope from thousands of ordinary citizens who have understood these principles and values, from Shaheen Bagh in Delhi to the citizen’s human chain in Kerala, was echoed by the session “Artists against Communalism”. The session saw prominent artists from the Hindi film industry and theatre, including Saeed Mirza, Swara Bhaskar, Zeeshan Ayub, Sushant Singh, Anand Patwardhan, and Rasika Agashe, who articulated the importance of art and artists in these dark times. The collective which could also be termed as a unique political festival led by citizens saw performances by artists on remembering Faiz Ahmed Faiz, on celebrating pluralism and syncretic traditions, and rejoicing the spirit of freedom through cultural performances by artists such as Neela Bhagwat and Poojan Sahil.

The collective ended with what has now become its hallmark, a separate political panel on the way ahead. This year’spanel included CPI(M) general secretary SitaramYechury and Supriya Sule (MP from the Nationalist Congress Party) highlighting the way ahead. Sitaram Yechury emphasised the clarion call given by citizen protests across the country, “Today at Shaheen Bagh there is palpable tension. This is like my generation and our fight during the emergency. Every religion may have a holy book but as an Indian there is only one holy book – constitution. The chronology of this government’s actions is that each step taken by it undermines the secular institutions of our country a bit further. The only way to face up to this is civil disobedience movement led by progressive and democratic forces of the country. That is exactly what is happening now with these protests. Abolish this talk of hatred and divisions between us.”

In these grave times, it is important to ensure unity across all democratic sections of our people. The nation-wide movements of protest provide us with much hope. However, it is also important that we, collectively, consider the way forward too, in channelling the anger around us into concrete, broad-based political movements for transformative action. To this end, the Mumbai Collective witnessed many prominent speakers, political leaders, eminent professionals, and students, come together with a clear message to defend the Indian constitution which is under a grave and unprecedented attack. It articulated that all democratic and progressive forces need to strive for secularism and constitutional principles, safeguard the right to dissent against the onslaught of communal forces, as well as aspire for transformative action and freedoms for all of India’s people.