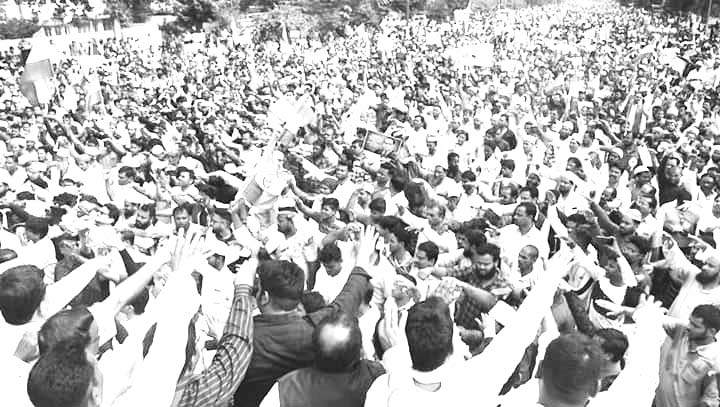 ON January 30, the martyrdom day of Mahatma Gandhi, the state capital of Odisha witnessed an unprecedented march against CAA-NRC-NPR in response to a united call given by secular and progressive political outfits, social groups, academics, artists, students and youth under the banner of “We the People of India”. A peaceful gathering of more than 50,000 people solemnly reaffirmed their faith in the Constitution of India and took a pledge to uphold its all-inclusive principles and values at any cost. The massive march began at the Exhibition Ground and ended at Mahatma Gandhi Marg with the people carrying placards and banners denouncing the Citizenship Amendment Act (CAA), National Register of Citizens (NRC) and National Population Register (NPR). Almost all political parties, except BJP and BJD, actively participated in the march. Prominent intellectuals, academics, lawyers, artists, minorities, dalits, adivasis, women, political and social activists, students and youth leaders were in the forefront of the march. This is the largest united platform and the largest mobilisation in Odisha against CAA, NRC and NPR.

The marchers read out the preamble of the constitution at Mahatma Gandhi Marg. One after another about 50 speakers reminded all about the circumstances and forces who killed Gandhi. The speakers also boldly told the gathering how these dark forces have reappeared now with greater aggression and determination to reduce the minorities, particularly Muslims, and the poor dalits and adivasis to that of second-class citizens. CAA is a design to demonise a great majority of Indians under the vision of a theocratic Hindu Rashtra propagated by the RSS-BJP. At a time when unemployment, food price, agricultural crisis, financial instability reached a point of no return, the BJP government at the centre instead of tackling them has resorted to marginalising further the victims of such situations by enacting anti-human and undemocratic policies like CAA, NRC and NPR. The higher education sector has been made unaffordable for the poor to benefit the education mafias and when students protest, their resistance is being ruthlessly repressed, as what we have seen in JNU. The speakers reminded people that the country was going through an undeclared emergency and citizens must come out in open to protest and reject unconstitutional, undemocratic and anti-people policies of the BJP government.

‘We the People of India’ declared the mission will not end with the march of January 30, rather this was just the beginning and the message will be taken forward to all villages, colonies, slums of all districts and blocks of Odisha. The rally saw with colourful messages on the placards, songs and creative presentation each calling for rejection of CAA, NRC and NPR. The forum also submitted a memorandum to the chief minister of Odisha urging him to stop NPR in the state. For the first time in Odisha, an atmosphere of faith, goodwill and brotherhood has been exhibited cutting across faith, ideological practices and social background. The speakers also appealed to the Naveen Patnaik government to follow the example set by Kerala and other states and resolve not to allow CAA, NRC and NPR which divides the society. CAA, NRC and NPR create destitution and deprivation of all kind. The march gave the call “we shall fight and we shall win”.