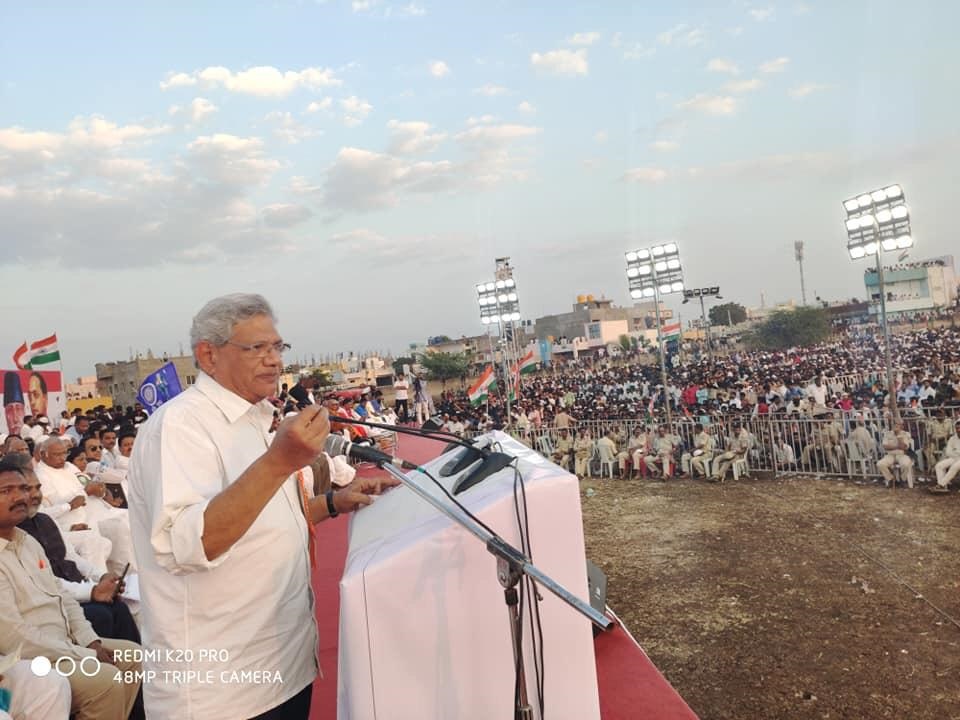 A MASSIVE rally, with an estimated participation of over five lakh people, on January 21, 2020 in Gulbarga, Karnataka gave a clarion call for a civil disobedience against the central government for implementing the CAA(Citizenship Amendment Act). The call for the rally was given by the Karnataka People’s Forum(KPF) comprising political parties and other sections of the civil society. The major political parties of the KPF are Congress, JD(S), CPI, SUCI and the CPI(M) along with some of the major groups working amongst the tribals and the dalits.

The mobilisation of the rally was done from the surrounding five districts. The rally was massive and was one amongst the largest organised in the recent period. The city of Gulbarga has a population of around five lakhs and an equal number of people participated in the public meeting which itself shows the massive strength of the rally. The main speakers of the rally were Mallikarjun Kharge, former central minister from the Congress party, H D  Kumaraswamy former Chief Minister of Karnataka, Swami Agnivesh, a social activist, Andhare, prominent adivasi leader and Sitaram Yechury, general secretary of the CPI(M).

Sitaram Yechury said that we all are patriots of independent India and we want to protect India from the Modi Shah duo who wants to destroy the country. He said the constitution of India is a supreme book for the modern India and this is being targeted by the BJP. The BJP with the implementation of CAA and then furtherance of NPR and NRC is hitting out at the basic ethos of the constitution.

Yechury said the chronology of the NPR-NRC must be understood. In NPR it is said that no paper will be required; only  questions will be asked. But this is not true. Once compilation of these questions is done by the respective enumerators, then according to the answers given, some of  the citizens will be termed as ‘D’ citizen, meaning ‘doubtful’. This ‘D’ citizen will then be targeted to prove her/his identity through a set of papers. Hence, Yechury said that two slogans should be raised to rebuff this nefarious design of the BJP government. First, while the NPR is conducted, the slogan should be, “jawab nahin denge” (we will not answer); second, when the NRC is conducted, “kagaz nahin dikhaynege” (we will not show the papers). He said on this basis the conspiracy of the BJP to divide the people will fail in the country.

Yechury further exhorted that in Kerala the state assembly has passed a resolution against CAA and NPR. Similarly Punjab has done it. He appealed to all the chief ministers to stand against Modi government and ensure that the CAA is not implemented.

He further called upon the people to continue the protests in a peaceful manner. This is the civil disobedience movement which by all proportions is next to the one launched by Mahatma Gandhi against the British colonial rule in India.

While sharing the three important dates of January 23, 26 and 30 for observing the birth anniversary of Netaji Subhash Chandra Bose, the Republic Day and the martyrdom day of Mahatma Gandhi, respectively, Yechury explained the relevance of these days and said that all of these dates speak about the integrity of our nation-India.