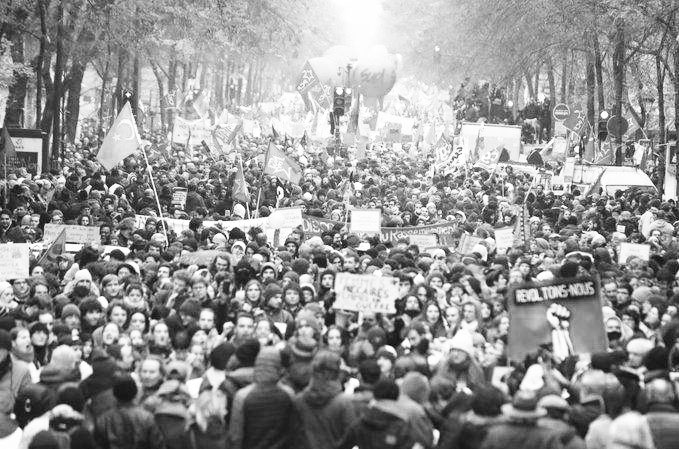 France on Strike: “We’re fighting Macron and his World!”

SINCE early December 2019, workers, students and pensioners across France have been staging a magnificent fightback against president Emmanuel Macron and his project of neoliberal ‘reform’. Beginning with an insurgent day of strike and street action on December 5, which mobilised more than a million people, protestors have continued their walkout from work and presence on the streets for six weeks now – the longest wave of continuous strikes in recent French history.

Launched by some of France’s largest trade union confederations, with the Left-wing Confederation Generale du Travail (CGT) in the lead, this national uprising already stands out for its level of support, its composition and its duration. Embedded in a context of social crisis, it combines the classic characteristics of a French social mobilisation with the presence of new features and players, including those emerging out of the 14-month-long movement of the Gilets Jaunes (Yellow Vests).

The decision of the union federations to call for a “renewable” national strike – a continuous strike mandate that can be used over time, without all the strike dates being declared in advance – represents a move away from the previous tendency to rely on discontinuous forms of strike action. From the outset, the perspective has been one of an all-out strike – an escalating process in which the rank and file could itself play a leadership role through daily assemblies and mass voting.

In the transport sector, this shift in perspective has resulted in more-or-less no-stop strike action since early December. Constituting the frontline of the struggle, train drivers, conductors and other public sector transport workers have brought weeks of disruption to rail, metro and bus services, including over the Christmas and New Year holiday period. As the initial strike action of December 5 continued into the following day, Paris witnessed traffic chaos, with public transport closures contributing to an estimated 370 km of traffic jams by the start of the working day. SNCF, the national rail operator, was forced to cancel 90 per cent of high speed (TGV) services. Six weeks on, timetables and services remain unpredictable and subject to cancellation.

Public sector workers, whose level of unionisation remains high, continue to constitute the backbone of the strike movement. Teachers, nurses, firefighters and local government employees have proved stalwart participants, as have representatives of other professions: a quick check on social media turns up video footage of striking lawyers discarding their gowns en masse, and insurgent ballet dancers and musicians from the Paris Opera assembling outside the building to offer breath-taking impromptu performances to passers-by.

On the industrial front, workers in the energy and chemical sectors have been out in force; on December 5, an estimated 44 per cent of EDF (electricity) employees struck work, the percentage rising to 80 per cent in some nuclear plants. Seven out of France’s eight oil refineries were confronted with blockades, along with a dozen or so fuel depots. More recently stoppages and blockades by port workers have brought major disruption to French ports.

The provocation for this nationwide upsurge is the fresh attempt by the French State, now headed by the neoliberal ‘centrist’ Emmanuel Macron, to demolish the national pension system: still one of the most generous and equitable in Europe. The system French workers are fighting to defend has its roots in the immediate aftermath of Second World War and the social security system set in place by Ambroise Croizat, a Communist minister and former Resistance activist. Over the past seventy years, pensions have operated on the principle of inter-generational solidarity, with active workers financing pension pay-outs to the preceding generation. In addition, workers in “special regimes” – designated categories often involving hard physical labour and shift work – have been entitled to take early retirement.

Since the 1980s, a sequence of French governments has attempted to chip away at this system, or deal it more strenuous blows. Such efforts have frequently landed governments in trouble: when in 1995 it was announced that the “special regimes” would be abolished, strikes and street mobilisations involving two million people brought France to a standstill over a three-week period. The proposal was ultimately abandoned.

This testifies to a tradition of protest (disparaged by opponents as the “French disease”) with deep historical roots and also the propensity to rise to new challenges. As the Marxist political scientist Stathis Kouvelakis notes, “French workers’ record in fighting neoliberalism is quite unique among advanced capitalist societies. From the mid-1980s onward, mass movements have regularly erupted in opposition to neoliberal reforms. Yet more remarkable is the fact that – contrary to the situation that prevailed in Europe after the British miners’ strike of 1984-85 – not all of these movements ended in defeat.”
It follows that a core ambition of the Macron regime is to smash this resistance: to inflict a Thatcher-scale defeat on workers that will put an end to French ‘exceptionalism’, open the door to full-throttle privatisation and enable the evisceration of France’s welfare state.  Pension ‘reform’ is the ground on which the corporate and governmental forces of French neoliberalism have pitched their camp for this battle unto death.

Firstly, they propose to cut pensions by basing them on lifetime salary. For public sector workers, this will mean that pensions are no longer based on final salary – a change with harsh consequences for low-waged teachers and other public employees. For those in the private sector, the change will spell the end of the existing calculation of pensions on the basis of an earner’s “best 25 years”.

Secondly, rather than being directly a percentage of salary, pensions are to be based on “points” accumulated by individual workers on a “save for your own retirement” basis. The monetary value of the points will be subject to regular redefinition by a governmental body (in discussion with bosses and unions), opening the way for downward manipulation of pension value and softening up the field for privatisation.

The third element involves a bid to force people into working longer by pushing back the retirement age from 62 to 64 years.

By combining strikes with giant popular mobilisations on the streets, not only in cities but in small and middling towns across the land, French workers have already won small but significant concessions. The proposal to put back the retirement age, announced soon after the start of the strikes by a bullish prime minister apparently set on mindless provocation, has now been ‘suspended’. In a further back-down, the government has announced that the new pension scheme will now apply only to those born after 1975, rather than 1963, while specific opt-outs have been offered to the police and the military, prison officers, lorry drivers, airline staff, dancers and other categories.

That concessions have been squeezed out of an intransigent regime that has pinned its colours to total victory indicates a loss of ground for Macron.

Many elements have come together to create and sustain the ferocious fightback now being waged across France. Those striking work and on the streets are inspired by the longer term perspective of open-ended action. Fortified and enriched by the Yellow Vest movement, with its new forms of protest, its persistent presence on the streets, and its extraordinary courage in the face of extreme levels of police brutality, people see this as the moment to hit back, to resist the multiple assaults on their everyday life, from schooling to medical services, from depleted public services to the threat of an impoverished retirement. Trade unions are once again demonstrating their strength following years of decline. Students conducting battles against cut-backs and hikes in fees meld effortlessly into what is a class uprising, an intergenerational coming-together in the face of neoliberal austerity and social disintegration.
Despite the best efforts of government propagandists in the mainstream media, public support for the strikers remains at impressive levels. In the absence of trade union strike funds (France has no such tradition), online sites for individual contributions have raised more than two million euros to help sustain strikers and their families.

The declaration made by Paris Opera ballet dancers following their vote to reject the government’s opt-out offer speaks to the hardiness of French ‘exceptionalism’, to a persistent culture of social solidarity and disdain for narrow, individualistic advance. “We have been told,” said the dancers, “that we can ourselves escape this reform and only see it applied to following generations… But we do not want to be the generation which sacrifices those who follow us.”

Steeled by this vision of society, and by their own indomitable will, French workers are ready to fight on.