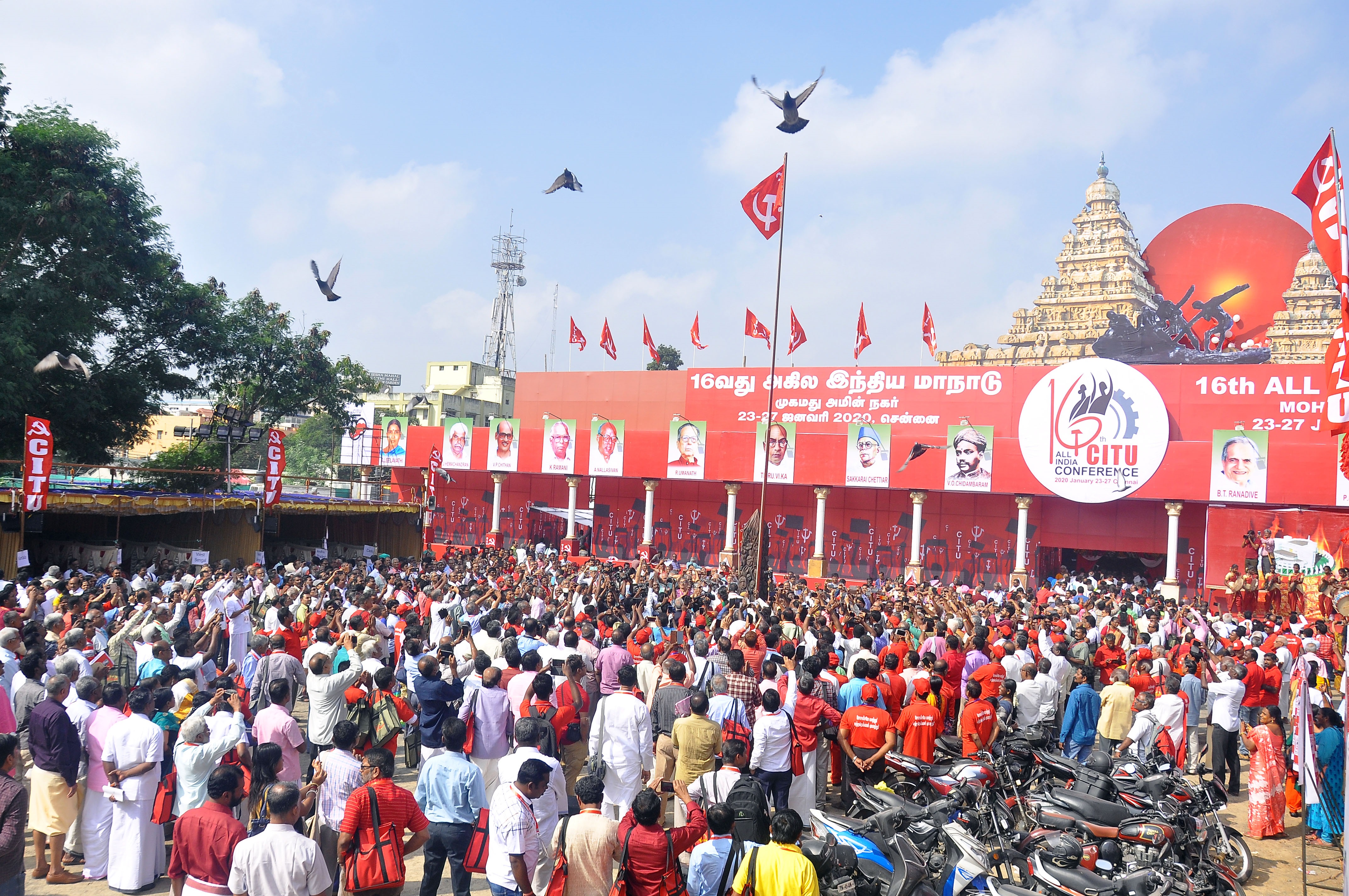 CITU Conference Call: Unite in Struggle to Reclaim what is rightfully ours

From G Mamatha in Chennai

THE historic juncture in which the 16th all India conference of CITU began on January 23 in Chennai, was ringing loud and clear. In the backdrop of breathless mounting of attacks on the lives and livelihood of the toiling people and on their hard-won rights for collective bargaining on the one hand, and on the other, the building resistance all across the country to fight back these attacks, specially the magnificent All India General Strike held just two weeks back – the challenges before the conference are clear and grave. So is the determination of the delegates attending, to fight until victory.

With the photos of the stalwarts of the working class movement gleaming over the delegates as if remind them of the long and arduous journey that the CITU has had over the last 50 years, and the one hundred years of the first national trade union centre of which they were builders, the conference began with the hoisting of the CITU flag by Hemalata, All India president of CITU.

A rousing reception was given to the martyrs torches that were brought from seven corners of the state in memory of the martyrs who laid down their lives for the cause of the toiling people.  Mashaals (torches) from Venmani, a small village in Thanjavur district where 44 agricultural workers were killed in the struggle for better wages and working conditions; from Puducherry which was a French colony where, in 1936, textile workers had a militant strike in which 12 workers were killed; from Golden Rock Beach which was the headquarters of Railways , which was an important centre of freedom movement  where, in 1945, five people were killed in the firing on a peaceful gathering; from Coimbatore which was a big textile centre in South India, where four leaders of the trade union were sentenced to death for a struggle against the sexual harassment of women workers; and Mashaals in memory of Comrades V P Chintan, J Hemachandran and Leelavathi, important trade union leaders of the state, travelled across the state and reached the venue of the CITU conference.

Delegates paid respectful tributes to the Martyrs Column and to Netaji Subhash Chandra Bose on his birth anniversary.

The inaugural session of the conference was presided over by CITU all India president, Hemalata. Reception committee chairman, A Soundararajan delivered the welcome address. Tapan Sen, all India general secretary of CITU invited the president of World Federation of Trade Unions (WFTU), Michael Makwayiba to the dais. He also invited the leaders of central trade unions who are on the joint platform of trade unions along with CITU, conducting countrywide struggles. More than 2000 delegates representing around 60 lakh members from 25 states and representatives of fraternal organisations, are attending the conference.

Addressing the inaugural session of the conference, Tapan Sen underlined the historic moment in which the 16th conference of CITU is being held – the golden jubilee year of CITU which was formed in May 1970 and the centenary year of the first national trade union centre which was formed in 1920. Hemalata congratulated the delegates for their efforts for the successful strike on January 8, 2020 and called upon them to further intensify the struggles to change the trajectory of the current policies, which are harmful for the working class and serve only the corporates.

Michael Makwayiba, greeting the conference, underscored the importance of building international solidarity and action in order to rebuff the attacks on the working class. He said, “We are together in struggle and by standing together and unifying the workers in struggles, we can fight any problem.” Makwayiba called upon the delegates to remain vigilant and identify the enemies of the working class. He said we must organise workers in every corner, and this will strengthen our ability to fight capitalism.

The inaugural session of the conference passed resolutions expressing solidarity to the French workers’ struggles; demanding the repeal of CAA and rejection of NRC and NPR and a resolution in solidarity with the people of Jammu and Kashmir.

Solidarity to the Fighting Workers of France

MOVING the resolution on French workers’ struggle, CITU president Hemalata, on behalf of the conference, conveyed revolutionary greetings to the rail and transport workers of France who are on strike since December 5, 2019.

The French rail and road transport workers are on strike for over 50 days demanding the withdrawal of the changes in the pension policy in the name of ‘pension reforms’ by the reactionary Macron government. The government has decided to combine the existing 42 different types of pension into one. The changes will result in severe reduction in the pension benefits. Workers will have to work for more years but will get lower pension. The government is also considering increase in the age of retirement from 62 to 64, which the French workers are strongly opposing.

While the call for the strike was given by the unions of the rail and road transport workers, many other sections of workers and employees including nurses, lawyers, police and others joined the strike on December 5 as well as on January 9, 2020. Huge demonstrations are being held in various cities across the country. In several places police resorted to attacks on the protesting workers injuring many.

The Macron government’s policies of ‘reform’ since 2017 have been attacking the rights and benefits of the workers in France by cutting down their hard won welfare benefits. This has led to discontent among the people who are coming out in big struggles. The ‘yellow vests’ movement, is continuing since more than a year. Since November 2018, hundreds and thousands of people have been demonstrating in Paris and other cities in France every week end. The movement started against increase in taxes but later included many other demands. Yellow vests also joined the workers’ demonstrations.

Despite the difficulties due to the strike of the rail and road transport workers, people in France are supporting the strike. Various sections of people have expressed their solidarity to the strike. Workers, especially in Europe see the strike as a struggle that would have a positive impact on their lives too.
It is not only the workers of Europe, working class all over the world, wherever the neoliberal policies are being implemented, including in India, are facing such attacks on their pension, wages and working conditions. Such attacks, by the capitalists and the governments which come to power with workers’ votes but work for the big corporates, have further increased since the global crisis, which still continues after more than a decade. The capitalists want to maximise their profits by curtailing the benefits of the workers. These can be defeated only by strengthening united struggles of the working class, standing in solidarity with the workers wherever they are fighting these attacks.

While conveying its fullest support to the fighting workers of France and the trade unions leading the struggle, the 16th conference of CITU has called upon the working class of India to extend support in all possible ways including financial support to the French workers.

MOVING the resolution demanding the repeal of Citizenship (Amendment) Act and rejection of NRC and NPR, Tapan Sen, general secretary of CITU exhorted the delegates to prepare the grassroots level unions to conduct house to house campaign on these destructive and draconian measures of the government. He said we will respond to the census exercise. But for NRC, our battle cry will be ‘Hum kagaz nahin dikhayenge’ (We will not show the papers) and for NPR, ‘Hum jawab nahin denge’ (We will not answer).

On behalf of the conference, he greeted the workers and other toiling and democratic sections of the people for their massive countrywide continuing protest against the CAA, NRC and NPR, including the January 8, 2020 countrywide general strike which also voiced the demand to repeal CAA and reject NRC and NPR.

CAA is an assault by the BJP government on the secular foundations of the constitution of India which was the outcome of more than 40 years of struggle and sacrifice during national freedom movement against the then British government’s communal divisive design, communal award and partition of India. Firm opposition to and struggle against such notorious conspiratorial design by imperialism was the lifeline of the freedom movement and Mahatma Gandhi was killed by the proponents and cohorts of such notoriety. CAA, the first communal Act in Independent India, is in consonance with British government’s two nations’ theory on the basis of religion which Indian freedom struggle never accepted and ‘secularism’ and ‘equality’ became firm foundations of the constitution of India.

Beginning in 2003 during Vajpayee government to bring NRC in the Citizenship Act and NPR through NRC Rules and amendment in Foreigners Act in 2015, CAA is the third step followed by the NPR through house to house enumeration during April 1 – September 30, 2020. These are the steps to totally subvert the constitution towards the RSS objective to establish ‘Hindu Rashtra’.

The CAA is also an assault on the citizenship right of the refugees, just before or after partition, from erstwhile Pakistan for re-verification of their citizenship on the basis of proof of persecution before giving them citizenship afresh under CAA.

The process under NRC-NPR is also a grave assault on the vast number of economically and socially marginalised sections of the people including landless rural and urban masses; migrant workers; adivasis, dalits and women for whom there may not be documents to prove their citizenship.
And, for the so called doubtful who fail to present the documents asked for by the persons during NPR enumeration, detention camps are being established.

Therefore, this conference demands immediate repeal of CAA and rejection of NRC and NPR.

The 16th conference of CITU calls upon the workers of the country to carry forward the movement uniting all other toiling and democratic sections of the people till the above demands are met.

MOVING the resolution demanding restoration of people’s and workers rights in Jammu and Kashmir, J S Majumdar, vice president of CITU noted with grave concern that bypassing the parliament, the people of Jammu & Kashmir and their legislative assembly, BJP’s Modi government, through government’s order (GO), had ended the special provision to Jammu and Kashmir under Article 370 and Article 35A of the constitution of India. In just two days, on August 5-6, 2019, ‘The Jammu and Kashmir Reorganisation Act, 2019’ was passed by both houses of the parliament dissolving the state, dismantling it into two separate entities and bringing both under the direct control of the central government as union territories (UTs). For the first time in independent India, a state under Schedule-I in the constitution, has been dissolved. This is a serious assault on the federal character of the constitution of India moving towards a ‘unitary’ India.

Prior to and since then, entire valley remains locked down; commerce, business, educational institutions closed; all movements on roads blocked; telecommunications snapped; civil liberties curbed; state leaders of opposition national and regional parties remain under house arrest; leaders of national political parties were detained in Srinagar airport as if the state is under ‘seize’.