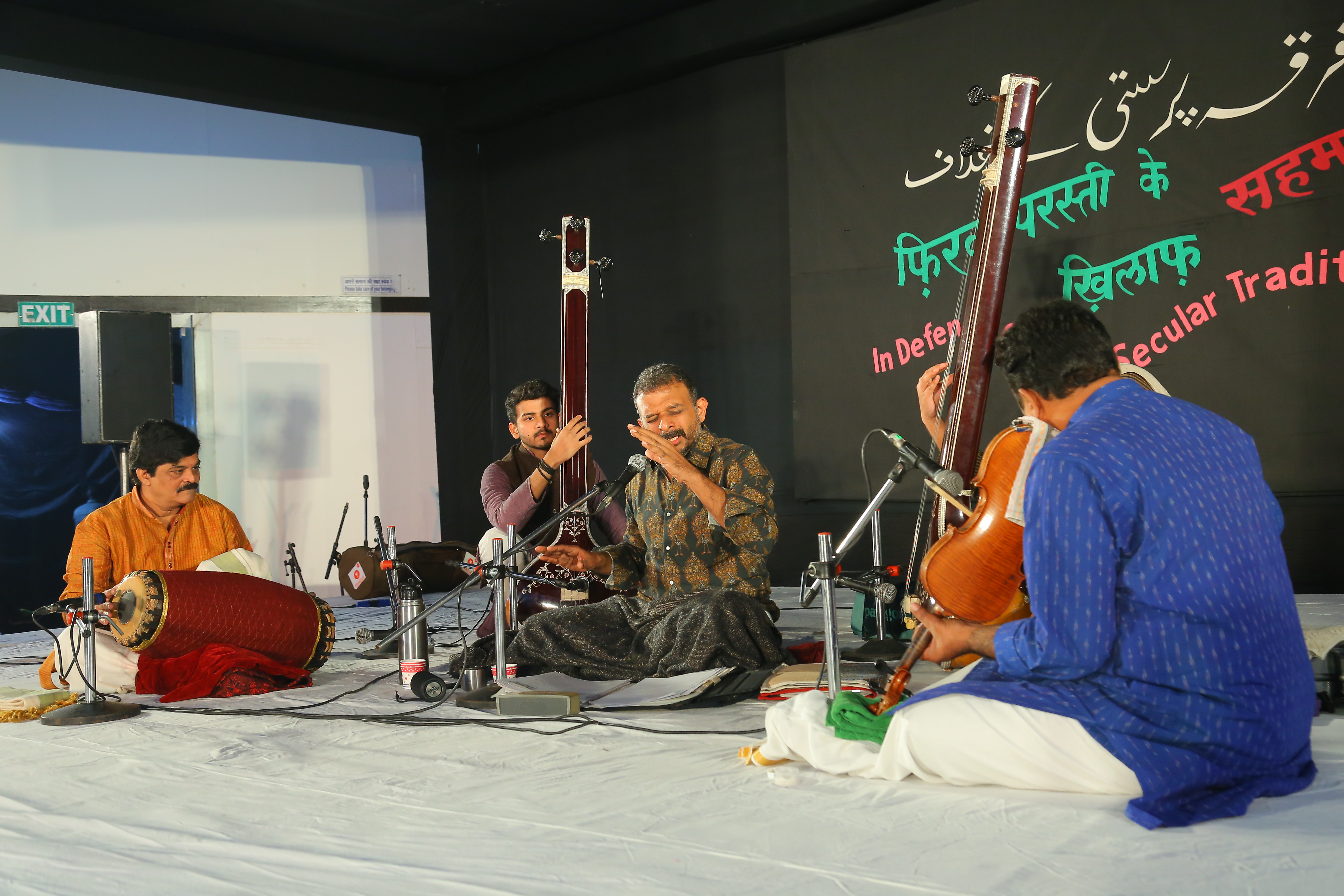 Saying No to NPR and CAA, the SAHMAT Way

WHAT do you do on an evening of dissent, especially at a time when the very essence of the Indian constitution is under grave threat? You dance, you draw, you perform and yes, you sing. For as the vibrant banners, strung at the annual SAHMAT cultural event, reminded us of Bertolt Brecht’s iconic words, “Yes, there will be singing about the dark times”. But you also speak as Faiz Ahmed Faiz wrote in a beautifully composed poem, “Bol ke lab azaad hai tere, bol zabaan ab tak teri hai.” If it is true that the commissions of the first day of the year carry the signs of the coming year then the 31st Safdar Hashmi Memorial Trust event on January 1, 2020 promises that the coming year will only strengthen our resolve to protest and hold on to freedoms that we cherish.

SAHMAT’s beginning of the year event barely needs an introduction. Thirty one years ago the well-known political activist and a stalwart of street theatre Safdar Hashmi was brutally attacked by a group of goons while he and his colleagues belonging to the street theatre group Jan Natya Manch were performing a play in a worker's colony near Sahibabad. Hashmi was not able to survive the brutal assault and he succumbed to his injuries twenty-four hours later on January 2, 1989.

The untimely death of Safdar led to a series of protests in different parts of the country by artists, intellectuals, students as well as workers of different hues. One of the most important outcomes of these protests was the founding of SAHMAT or the Safdar Hashmi Memorial Trust. Formation of SAHMAT was in a way a spontaneous and an organic response to an uncalled for death of a young political soldier who was committed to the ideals of democracy and secularism. SAHMAT since its establishment has played an important role in bringing together people from different walks of life including artists, intellectuals and students on a single platform. And in the process it has re-affirmed time and again its commitment to upholding the principles of Indian constitution including those of secularism and freedom of expression.

This year SAHMAT evening was all about registering protest against union government’s undemocratic and authoritarian move of introducing Citizenship (Amendment) Act, National Register of Citizens and National Population Register. In keeping with this theme a creatively conceived badge carrying the message – NO NRC, NO NPR, NO CAA, KAAGAZ NAHIN DIKHAYENGE (We will not show papers) – in bold letters was handed out to all the attendees.

The proceedings of the day began with short skits by the street theatre groups Jatan Natya Kendra and BIGUL. The skits of the two groups one from Haryana and the other from Delhi were besides being entertaining extremely thought provoking. Basically a satire, the performers through their acts tried to throw light on the issues that have wreaked havoc in the society since the BJP led NDA government has come to power. The plays were a report card of a different kind in that they highlighted the policies of the present government that have created problems not just for the deprived sections of the society but also minorities as well as intellectuals.

As the evening became more chilly, a slew of riveting performances by T M Krishna, Vedi Sinha, Pakhi Sinha and Ujjwal Raj Sen of Avahan, Dhananjay Kaul, Priya Kanungo, Madangopal Singh and others took place. While the members of Avahan sang songs of dissent drawn from the works of legendary poet Faiz Ahmed Faiz like 'Hum Dekhenge', Krishna mesmerised the crowd with his Kannada rendition of the Vaisnava bhajan. Typical of his style, he incorporated in this recital hymns from the various schools of Sufism. The amalgamation of the two strands – Vaisnavism and Sufism – provided for an exhilarating experience. T M Krishna interposed his performance with short comments on such themes as nationalism, importance of dissent, secularism and et al.

Madangopal Singh, the famed Sufi singer took the audience on a journey of Sufi poets. Led by Syeda Hameed an ensemble of performers brought out ecstasy of freedom through the speeches of Maulana Azad around 100 years ago underlining how Muslims, Christians and all others have contributed to the making of Modern India and belong to it as much as anybody else.

The organisers also did not forget to remember and pay homage to those intellectuals and political activists who passed away in the year gone by. Among those to whom tributes were paid were Girish Karnad, Shaukat Azmi, Gita Siddharth, Ramakant Gundecha, Haku Shah, Salim Bhai, Zahoor Siddique among others.

The cultural performances were also accompanied by the release of the book Once Upon a Time There Lived a Man. A book of critical media articles on the Supreme Court judgement on the Ayodhya dispute, Justice Denied was published earlier. Another book, a collection of essays, Pune Pune Gandhi, edited by Rajendra Sharma in Hindi was also released.

A statement which was read by Prabhat Patnaik and endorsed by all those present underlined the fact that since the present regime of BJP led NDA has come to power, it has only indulged in politics which has wreaked havoc in the country. And it has specifically targeted those groups and individuals who are not in agreement with their outlook. It noted that the policies of the present government should be condemned in strongest of words and that in order to secure and safeguard the secular and democratic credentials of this country – which are being repeatedly attacked – individuals of all hues should unite and fight back.

Yet another highlight of the event was the exhibitions addressing different themes which were put up. While Parthiv Shah’s photo exhibition threw light on the Hashimpura massacre tragedy by capturing the struggles of the survivors and relatives of the deceased to survive in the aftermath of the massacre, Javed Sultan’s portrait collection pertained to the two-day massive farmers’ march which took place in Delhi in the year gone by which highlighted the twin issues of agrarian crisis and farmers’ suicides. The exhibition which was curated by Vertika Chaturvedi and Kanishka Prasad was all about bringing to light the important aspects of the preamble of the Indian constitution. There were over 200 photographs in the exhibition. Through the exhibition aptly titled ‘We the People of India’ the photographs laid bare the fact that CAA, NPR and NRC are a direct attack on the constitution. There were ten blown up photographs of the detention centres in Assam by Partha Sen which showed the horrors of the detention centres.

Alongside an exhibition on the genocide of 1984 was also put up by Vijay S Jodha. The exhibition which was conceptualised in the form of commemorative stamps carried portraits of some of the many victims of the anti-Sikh genocide.

An exhibition on the plight of Sonbhadra farmers who are waging peaceful battle against the incumbent government in order to secure their land was also put up on this occasion. An interesting exhibition by Riyas Komu featured a series of woodcuts which documented the history of India since independence. The idea of this exhibition was to highlight the fact that violence has played an important role at many junctures of this country’s history.

Photo exhibitions which captured the unwarranted violence by Delhi police against students of Jamia Millia Islamia, Delhi and the ongoing students’, intellectuals’ and other individuals’ protests against CAA, NRC and NPR was also put up at the venue. Some of the images which had protesters holding placards and banners with eye-catching slogans were blown up in size and put up.

The cultural evening organised by SAHMAT remains very hard to explain to those who have not had an opportunity to experience it. Besides a list of talented and motivated artistes performing one after another, this evening is also marked by camaraderie and bonhomie among long associates and friends.

Indeed it will not be too off the mark to quote Mulk Raj Anand to describe the spirit of the hundreds that gathered at the slightly chilly SAHMAT as “…(a) membership so large that it forms, quantitatively, one of the largest blocks for the defence of culture in the world.”

STATEMENT
The union government has of late adopted a number of measures which seek to undermine the constitution in letter and spirit, to divide the people on the basis of religion, to reduce the Muslim minority to second class status, and to suppress all dissent against these divisive policies.
The unilateral abrogation of Article 370 in August violated the clear understanding of the constitution that any change in J& K’s status could only occur with the concurrence of the representatives of the people of that state. And now the government has enacted a Citizenship (Amendment) Act, which not only violates the constitutional provision of equal rights, but would lead, when its sequel the National Register of Citizens is drawn up, to the languishing of large numbers of people belonging to the Muslim community in detention camps. In fact, millions of poor people belonging to all communities, who lack the requisite papers, would be subjected to immense hardships, uncertainty and terrorisation.
While the country has erupted in opposition to the CAA and the NRC, with lakhs joining protest demonstrations, the response of the BJP government both at the centre and the states, has been to weave a tissue of falsehoods, and to unleash unprecedented police brutality on the protestors, among whom again those belonging to the Muslim community have been singled out for particularly vicious treatment.
This assault on the right to dissent is unacceptable to us. This assault on the basic premises of our constitution which express the values upon which modern India is founded is unacceptable to us. We demand the immediate and unconditional release of all political prisoners in J&K, and the restoration of normalcy in that state through discussions. We demand that the government which holds office by swearing loyalty to the constitution announce clearly that the NRC exercise is permanently abandoned. We demand that the CAA which discriminates between people on religious grounds is withdrawn. We demand that the basic right of the people to hold peaceful demonstrations is unconditionally respected.