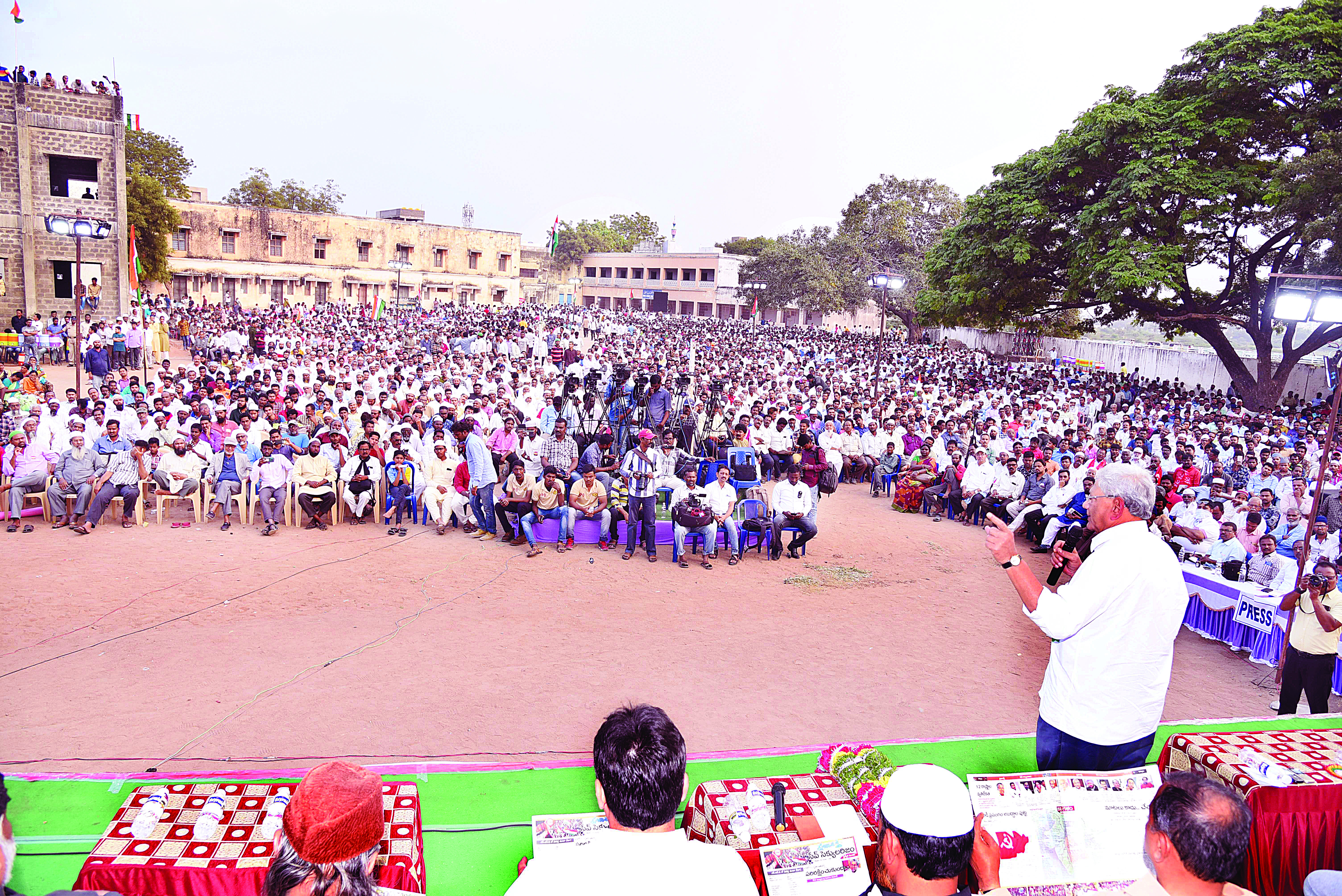 Campaign against CAA, NPR and NRC

THE movement against the CAA, NPR and NRC has been going on throughout Andhra Pradesh for the last three weeks. State convention was conducted to gather all the sections who oppose the draconian CAA, NPR and NRC on December 23 at M B Vignana kendram, Vijayawada. P Madhu, CPI(M) state secretary, MA Gafoor, CPI(M) Central Committee member, K Ramakrishna, CPI state secretary, Congress leader Tulasi Reddy and others spoke in the  convention and exposed the danger of NRC related mischievous deeds of Modi government. They called for a coordinated united movement of all like-minded people.  More than 600 people from various organisations from different places attended the convention. After deliberations, ‘Forum for Protection of Secular Constitution’ was formed with KS Lakshmana Rao, MLC as the convener. The convention decided to conduct huge public meetings at Kurnool, Visakhapatnam and Guntur apart from all other district headquarters and major towns throughout the state.
CPI(M) general secretary Sitaram Yecury lashed out at the central government at the huge public meeting held in Kurnool on December 28.  “They (the BJP) are the ones who are playing vote-bank politics, and they accuse us (the opposition parties) of indulging in it,” Yechury said. He explained the ill-effects of the Citizenship (Amendment) Act (CAA), National Register of Citizens (NRC), and National Population Register (NPR) in detail. He said that prime minister Narendra Modi lied to the people of the country about the NRC. “The central government told parliament nine times that NRC would be taken up across the country. The president also said it once,” Yechury said.
The Act pertaining to NPR had been brought in by the BJP government led by former prime minister A B Vajpayee, he said. “But the earlier iteration had only 15 questions. Now, the government has added six more, increasing the total number of questions to 21,” he said. “Where and when was your father born and where and when was your mother born are some of the questions in the new NPR exercise,” he said. “The CAA, the NPR and the NRC are aimed at driving out Muslims from the country,” Yechury asserted. Referring to the protests being witnessed across the country, Yechury said that people are standing against the forces that are attacking the constitution. “People who are protesting are patriots. It is a fight between the patriots and Hindu nationalists,” he observed. M A Gafoor presided over the meeting. CPI state secretary K Ramakrishna and APCC vice-president Tulasi Reddy were present.
On December 29, another public meeting was held at the industrial city Visakhapatnam. B V Raghavulu, CPI(M) Polit Bureau member explained the evil affects of CAA, NPR and NRC in detail. He said that the BJP-RSS game plan to divide India on communal lines should not be allowed and should be fought back unitedly. He cautioned the public that these acts and activities of Hindutva forces are dangerous to the interests of all Indians and this should not to be underestimated. Raghavulu urged YS Jaganmohan Reddy, chief minister of AP to oppose the NPR and to prove his honesty. Ch Narasinga Rao, CPI(M) state secretariat member, J V Satyanarayana Murthy, CPI state joint secretary and others also spoke.
A huge public meeting was held on January 3 in Guntur. CPI(M) Polit bureau member, Prakash Karat participated in it. Addressing the meeting he said, wider united movement has to be built to defeat the nefarious attacks on secularism and on the Indian constitution by the BJP-RSS combine. He appealed the chief minister of AP not to implement the NPR process in the state. Pioneered by Kerala, about 12 chief ministers have already opposed and said they will not implement the NPR process in their states. He said AP should also join the struggle. People have been participating in protests and meetings in Delhi, Mumbai, Kolkata, Chennai, Bengaluru and other places throughout the nation against the CAA-NPR-NRC, Karat said. Students of IITs, central universities and other centres of higher learning have been fighting back the threats to secular India, Karat explained. He appealed the people to join the movement to safeguard the secular India and the basic tenets of Indian constitution. CPI(M) state secretary P Madhu, CPI state secretary K Ramakrishna, CPI(ML) leader Venkateswarlu, district leaders of YSRCP, TDP and others also spoke. K S Lakshmana Rao presided over the meeting.
SPECIAL TABLOID ON
SAVE SECULARISM
Prajasakti Telugu daily published an eight page special tabloid titled ‘Save Secularism’ during this period. About 2,28,300 copies were sold at Rs 2 per copy. Articles, news items and some facts and figures about the CAA, NPR and NRC were covered in that. People received well the content provided in the special issue. Readers, particularly minorities, congratulated the efforts of Prajasakti in defense of secularism.