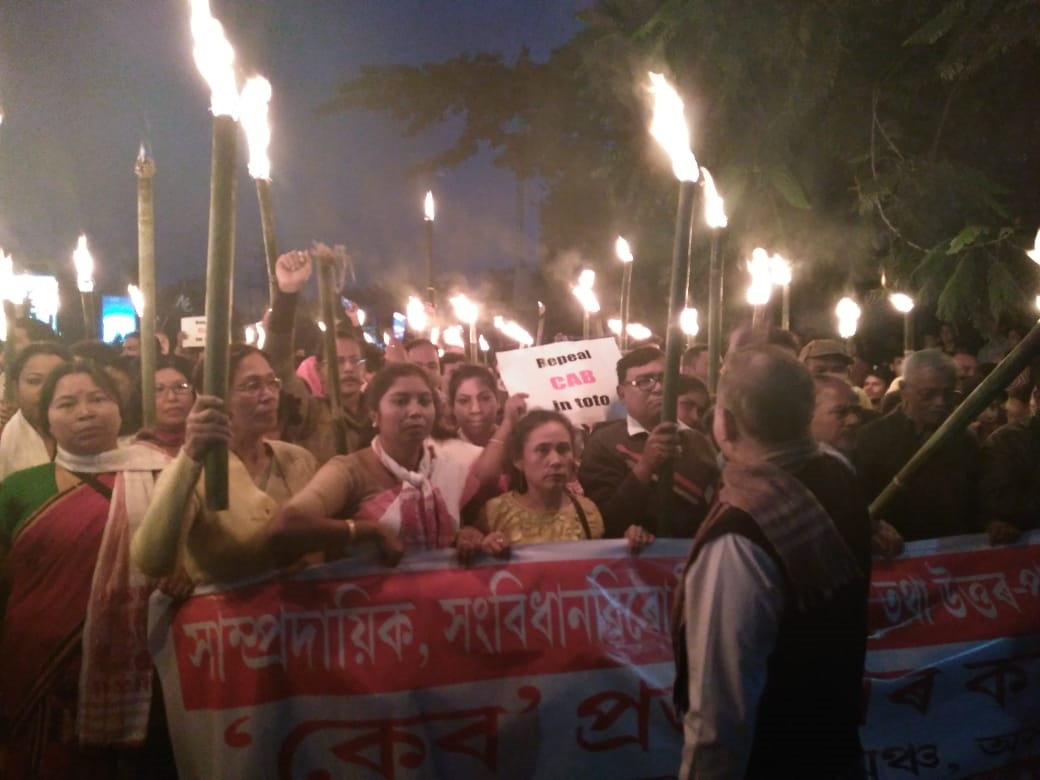 THE people of Assam are protesting against the Citizenship Amendment Bill, 2019 (CAB) which is unconstitutional, communal and violative of Assam Accord, right from the moment it was introduced in 2016. Though the bill was passed in Lok Sabha in January 2019, it was not tabled in Rajya Sabha due to united protest of all opposition parties and massive protest in Assam and north east.

But after getting an overwhelming majority in the last Lok Sabha elections, the BJP government has announced to prepare an NRC throughout the country and as a preparation for it, they have announced the introduction of CAB, 2019 in this winter session of parliament. This evoked sharp reaction in Assam. The people of Assam are opposing the CAB on three counts. (i) It is anti-constitutional as it violates the sense of equality among citizens; (ii) it is communal because it proposes granting of citizenship on the basis of religion and (iii) it is against the interests of Assam as it violates the cut-off date for detection of foreigners, ie, March 24, 1971 as stipulated by the Assam Accord.

The CPI(M) and the Left, continuing the protests for the last three years, have organised sit-in demonstrations throughout the state on November 18, the opening day of the winter session of parliament. In district headquarters, protest programmes were organised by the Left and Democratic Manch, Assam (LDM). A protest demonstration was also held in front of the assembly, urging the Assam assembly to adopt a resolution against the CAB. Different Left and democratic mass organisations called for a protest in Guwahati on December 6. It was joined in by hundreds of protestors. The organisations also announced a bandh a day after the bill is placed in Lok Sabha. As the bill was introduced in Lok Sabha on December 9, bandh was scheduled on December 10.  All Assam Students’ Union (AASU) and North East Students’ Organisation (NASO) separately called for north east bandh on that day. The whole north east came to a grinding halt on December 10.

In the meantime, college students began to come out to the streets in large numbers initiated by a massive rally of Cotton University students, the premier higher education institute in Guwahati. In all the universities, massive processions were held by the students and teachers.

On December 11, the situation was unprecedented. In the Brahmaputra valley of the state, lakhs of people came out on the streets. Students from almost all colleges proceeded to the secretariat office at Tezpur on foot and practically filled all the roads to the secretariat. Police resorted to several rounds of blank fire, used tear-gas and lathicharge to disperse the protestors. The employees of the secretariat also came out in support and demanded repealing of CAB.

People from all walks of life – artists, writers, actors – came out to the streets. The LDM, Assam took out a massive torch-light procession at 5 pm in Guwahati city. More than 1000 people joined in. It was attended by Deben Bhattacharyya, convenor of LDM, Assam and the state secretary of CPI(M); Uddhab Barman, senior leader of the Party; Suprakash Talukdar, Central Committee member of the CPI( M); Dambaryu Bora, leader of CPI, Pankaj Kumar Das of CPI(ML) and other leaders of the Left and democratic parties. Dr Hiren Gohain, a noted intellectual of the state also participated.

Taking plea of violence, the state government has stamped curfew in Guwahati city from 7 pm on December 11 for an indefinite period and has shut down internet services in 10 districts. Section 144 of CrPC is clamped in almost all the districts. Defying the curfew and other repressive measures, the people of Assam are continuing the anti-CAB movement. The CPI(M) along with other Left and democratic parties, mass organisations has decided to continue the movement demanding the repeal of CAB, 2019.

THE CPI(M), Delhi state committee organised a dharna at Jantar Mantar on December 10, to protest against the severe attacks on human rights by the RSS led BJP central government. December 10 happens to be the International Human Rights Day.

The protestors were addressed by CPI(M) Polit Bureau member, Prakash Karat. He lambasted the central government for its abrogation of all civil and democratic rights of the people of Kashmir for over four months.  He further accused the RSS-BJP of trying to divide the people on religious grounds. The Citizenship (Amendment) Bill being pushed by the central government seeks to make religion as the deciding factor for determining citizenship. Thus the Bill states that those Hindus, Sikhs, Christians, Buddhists and Parsis, who have illegally entered India from neighbouring countries will be provided Indian citizenship but this right will not be extended to the Muslims. This is against the constitution that prohibits any discrimination on the basis of religion, caste, language or region.

These moves, said Karat are aimed at creating communal polarisation and diverting people’s attention from real issues like unemployment, economic crisis, cuts in government spending on education, wanton privatisation of public sector units, negative changes in labour laws and attacks on trade union rights of the working class. He called upon the protestors to resolutely fight these attacks on the basic human rights of the people.

The dharna was presided over by K M Tiwari, state secretary of the CPI(M) and was addressed by him, Sehba Farooqui, Virender Gaur, Maimoona Mollah and Sidheshwar Shukla all members of the Delhi state committee of the Party.