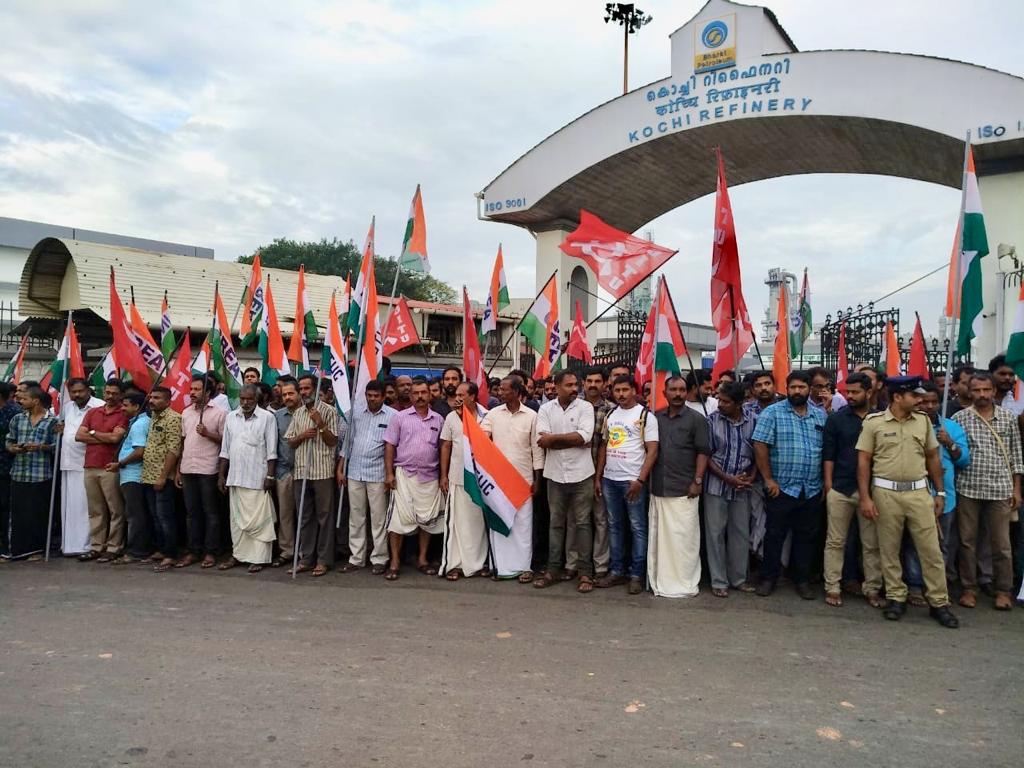 WORKERS of public sector oil and petroleum companies, BPCL, HPCL and ONGC (MRPL) observed a nationwide strike on November 28, opposing Modi government’s suicidal move to completely sell out BPCL to private companies. The united strike was led successfully by the leadership of all the three national federations of oil and petroleum sector workers. Around 30,000 regular and contract workers led by around 25 grassroots level unions affiliated with these federations, took part in the strike.

BPCL, HPCL and ONGC (MRPL) refineries and marketing operations witnessed huge impact of the strike across the country. The epicentres of the strike were Mumbai, Kochi and Mangalore and Kochi refinery had the maximum participation with all the unions affiliated under different trade unions. Militant and colourful processions, demonstrations and dharna by the striking workers were organised in and around the refinery complex. At the joint call of trade unions, CITU, AITUC, INTUC, HMS, UTUC and TUCC, workers all over Kerala participated in large numbers by organising street mobilisation and wore black-badges.

In Mumbai refinery, an unprecedented demonstration of determination to defeat the privatisation move was shown by the striking workers. Marketing workers from far flung areas of Mumbai travelled down to the Chembur Refinery gate, many with their family members and around 500 workers wearing black t-shirts, staged powerful demonstration. Later, a 2,000 strong workers’ long march was held covering about nine kilometres from the refinery gate and culminated into a big public meeting near Ambedkar Gardens near Chembur Railway Station. Many prominent trade union leaders addressed the striking workers. In Mangalore Refinery (MRPL), around 5,000 regular and contract workers went on strike. A notable fact about the strike in MRPL is that it is fully owned by the ONGC.

The workers of HPCL refinery at Vizag organised a march and demonstration. However, the contract workers in the marketing operations in HPCL and IOCL in all the southern states of Kerala, Tamil Nadu, Karnataka, Telangana and Andhra Pradesh participated in the strike in full strength. Tanker Lorry Workers also joined the strike in the southern states.

At the main gate of Numaligarh Refinery (NRL), in Assam, workers staged a huge demonstration opposing privatisation of the BPCL. It should be noted that succumbing to the protest agitation by the people of Assam in general and the workers of NRL and people from the nearby villages, the government had to agree to maintain complete public sector entity of NRL separating from BPCL.

All the workers engaged in the bottling plants, bulk storage installations and all the regional headquarters overwhelmingly took part in the strike in the country. Around 250 striking workers from the Northern RHQ in Noida and surrounding states organised a dharna at Jantar Mantar in New Delhi, and they were addressed by several MPs and central trade union leaders. The biggest bottling plant of Asia situated in the western region at Uran, near New Mumbai had to be shut down due to the impact of the strike.

As part of the preparations for the strike day, gate meetings, pit meetings, effigy burning etc, against the move of privatisation of BPCL were held by coal workers in different locations and work stations of almost all coal producing subsidiaries of CIL in the country. Solidarity activities were carried out in 55 collieries of ECL (19), BCCL (5), CCL(14), WCL (5), SECL(7) and CMPCI(5).

Yet another significant development is that on November 30, electricity workers in Kerala, under the banner of Electricity Employees’ Federation of India (EEFI), organised a huge demonstration in front of the Kochi Refinery Gate in solidarity with the struggles of Kochi Refinery workers opposing privatisation.        Such a large-scale support to the striking workers of one of the energy segments (oil and petroleum) by the workers of other energy segments (coal and power) is unprecedented. And the significance of this development must be understood in the political, ideological and organisational perspectives. These strategic sectors economically dominate the centre as they are the nerve of the entire economic system of capitalism.

Currently, the energy sector is faced with challenges in different dimensions. It is amusing to note that the central public sector undertakings which are under the hammer of privatisation, pertain to the sectors (oil and petroleum, coal, power and shipping and container business) already under the business domain of two monstrous crony capitalists of Modi government – Ambani and Adani.

Under the impact of systemic crisis of capitalism and conspicuously capitalist class oriented anti-people policies of the Modi government in dealing with the crisis, the public sector energy industries have also been pushed into the grip of the crisis.  Amongst the list of eight core sectors which have suffered contraction of growth, the worst record of the sector in the last 14 years, five are from energy sector – coal, crude oil, natural gas, refinery products and electricity. Clearly the energy industries in public sector are exposed to economic and political onslaught leading to dismantling, down slide in commercial strength and ultimately pushed to privatisation. The situation is full of challenges and providing opportunities for integrated united resistance struggles of entire energy sector workers.

The huge magnitude of the strike has clearly demonstrated the determination of the affected workers to fight the Modi government’s move to privatise BPCL and HPCL. It is necessary to note that the workers have participated in the strike braving the threat and intimidation by government and prohibitory orders obtained by the management at the behest of ministry of petroleum and natural gas through various High Courts.

Many encouraging developments have been witnessed centering round the strike. In locations which are historically weak in worker participation in strike struggles, this time it was exceptionally record breaking success. Voice of condemnation of the government policies was in high pitch in course of rallies and dharnas. Participation of women workers was remarkable. Strike day demonstrations and mobilisations throughout the country were huge and militant in character.

The message and mandate of the November 28 strike action is loud and clear. There is clear affirmative signal for integrated and united struggle of all the segments of the energy sector to defeat the move to handover the domination and control of energy sector as a whole to the cronies of government.

The post-strike national convention of oil and petroleum workers under the banner of the three national federations at Kolkata on December 22 is under preparation. There is perceptible enthusiasm amongst the unions regarding participation and conclusion of the forthcoming Kolkata convention.