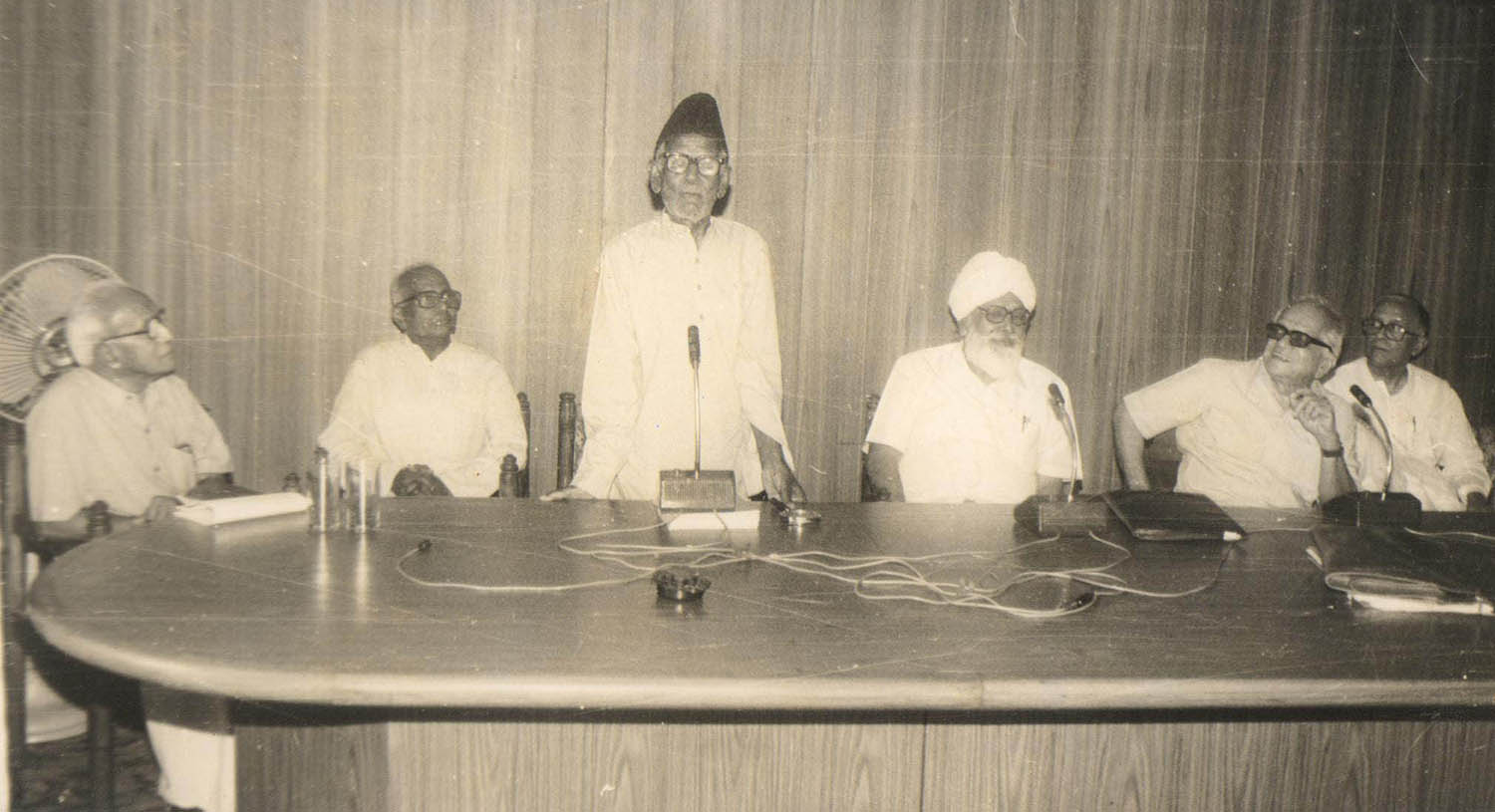 DADA Amir Haider Khan was one of the legendary versatile worker revolutionaries of the Indian sub-continent. He fought against British colonialism to liberate our country from foreign domination. He mobilised and organised workers and peasants for their rights and for the attainment of a class-less society. He devoted his entire life for building the communist movement. His commitment to proletarian revolution, his determination and steadfastness in serving the peoples’ cause in spite of repression, incarceration and untold difficulties for over seven and half decades was unmatched. His commitment to the ideas of international revolutionary socialism and struggle to change the course of history was exemplary.  Even a simple account of his life reads like a contemporary history of the first half of the twentieth century world.

Anti-colonial struggles produced many valiant communist freedom fighters from all sections of the society. Many of these pioneers of the communist movement came from the Muslim community. Amir Haider Khan was one of those stalwarts.

Dada Amir Haider Khan was born in 1900 in a small peasant family in a remote village, Kalian Sialian in Gujjar Khan region of North Punjab Province, which is now in Pakistan. This most economically and politically backward region of Punjab became a centre of a new national awakening in that period and had produced many patriots and revolutionaries. From this very region, a large number of young men had joined the INA. It is not surprising Amir Haider Khan hailing from this remote region became one of the pioneers of the Indian Communist Movement.

Dada had a very hard life right from his childhood. He was still a lad of hardly five or six years, when his father died. He could not receive proper education as there was no school in the village and his step-father was reluctant to help. Because of the inhospitable atmosphere in the family, he was forced to enter into the bigger, wider world prematurely at the age of fourteen. When doing assorted jobs for a living and traveling around the world, he quickly learned to face up to the many challenges that life had thrown at him.

In 1914, he went to Bombay, where he joined as a labourer on a London bound ship. His rebellious spirit led him to lead the fight with the management against the injustice meted out to his co-workers and succeeded in redressing the grievances. In 1918, he joined an American merchant marine ship. These assignments took Dada to Europe, America, and Far-East and gave him the opportunity to travel all over the world, teaching him international affairs, the condition of the colonies and the plight of the working classes. At this time, he met Joseph Mulkane, an Irish nationalist who introduced him to anti-British political ideas. In 1920, he met Indian nationalists and Ghadar party members in New York City and began distributing banned Ghadar Party literature to Indians all around the globe, even risking his life.

In 1922, he was dismissed from the shipping job for actively participating in the strike which broke out as a part of the post-war upsurge of working-class struggles. Thereafter, he worked as boiler engineer, airplane pilot and auto worker for a living, traveling to every part of the USA. During this period, he also became a political activist and worked with the Anti-Imperialist League and the Workers party of USA.

In 1926, he was sent to the Soviet Union to study at the University of the Toilers of the East. The CI (Communist International) was attempting to help all colonial countries which had industrial workers, to build Communist parties. With this objective, the CI was attempting to help train some revolutionary workers who would become party organisers and political workers in their respective countries. MN Roy asked the American Communist Party for help in sending some Indian-origin communists, which in turn contacted the Ghadar Party. The Ghadar Party selected five students, Dada was one among them. He studied Marxism-Leninism for two years under the pseudonym Sakorov, as it was the practice for the students from colonial countries to assume fictitious names for the sake of secrecy.

In 1928, after completion of the University course in Moscow, he came to India and plunged headlong into the freedom struggle against the British. He established contact with SV Ghate, SA Dange, PC Joshi, BT Ranadive, Bradley and other senior communists in Bombay. He joined General Motors as a worker and soon started organising the workers of GM and the neighbouring textile factories. Alarmed by the growing communist activities, the authorities foisted the Meerut Conspiracy Case on trumped up charges in 1929 against important communist leaders including Amir Haider Khan.

Amir Haider Khan evaded arrest and escaped on a forged passport by sea and went to Moscow and attended the International Trade Union (Profintern) Congress as member of the presidium and also attended the 16th Congress of the CPSU in 1930.

After his return to Bombay in 1931, the Central Committee of Communist Party of India had sent him to Madras to avoid arrest, as he was still wanted in the Meerut Conspiracy Case. He carried on political work all over South India under the pseudonym of Shankar. He started his activities among the workers and peasants. He started a workers union called Young Workers League in Madras, in 1932. He helped the Kisan Sabha in formulating concrete slogan for mobilising the peasants in Tanjore Delta. During that time, he established contacts with many promising youngsters and attracted them towards the communist movement. Putchalapalli Sundarayya, a student, studying Intermediate course in Madras Loyola College was one of them. However, the government acted swiftly and arrested him in May 1932 for bringing out a pamphlet praising Bhagat Singh and his co-revolutionaries.

Within a year after his release, he was re-arrested in 1939 in Bombay under the Defence of India Rules and was given a two year sentence. In the jail, he wrote the story of his life and labour, which was later published as Chains to lose: Life and Struggles of a Revolutionary – Memoirs of Dada Amir Haider Khan.

He was the last of the Communists to be released in 1942, after the People’s War thesis. After working in trade unions and Kisan Sabha for a period, Amir Haider Khan was sent to his native region in 1945 to build revolutionary movement there. He became a member of the Rawalpindi district committee. He organised a network of hide-outs all over Pakistan and he helped in safely repatriating Hindu families during the partition riots.

After the formation of Pakistan, he took a very active part in the work of Pakistan Communist Party. He stood firmly in upholding the secular and democratic values, boldly facing the Islamic state’s repression. He was constantly hounded and imprisoned many times. In 1949, he was arrested under the Communal Act and released after 15 months. He got re-arrested after a few months for organising the defense for the accused in Rawalpindi Conspiracy Case. He was released after huge public outcry and campaign in the press. Again, in 1958 when General Ayub Khan imposed martial law, Dada was arrested and interned in Rawalpindi jail along with other comrades.

Dada spent his twilight years – the 1970s and 1980s – in Rawalpindi. His first visit to India after independence was in 1988, where he met his Communist comrades for the last time. He died on December 27, 1989.

In his personal life, he always remained a fakir, a ‘homeless wanderer’, as he used to call himself. He did not own any valuable possessions. He had donated the share of his inherited land in his ancestral village and built boys' and girls’ school, together with a science laboratory. He was a great proletarian internationalist.

He fought British imperialism with such skill and tenacity that the British authorities branded him as a ‘very dangerous person’. He outwitted the British spies many times and traveled abroad to coordinate with the Comintern using his past experience and contacts as a seaman.

His life gave real meaning to the Marxist maxim that the world ought to be changed for the better. The real emancipation of working class lies in the socialist transformation of the society. The primary value of one’s life is to put that belief into practice. The legacy of this great revolutionary will continue to inspire the present and future generations of radical and progressive people.