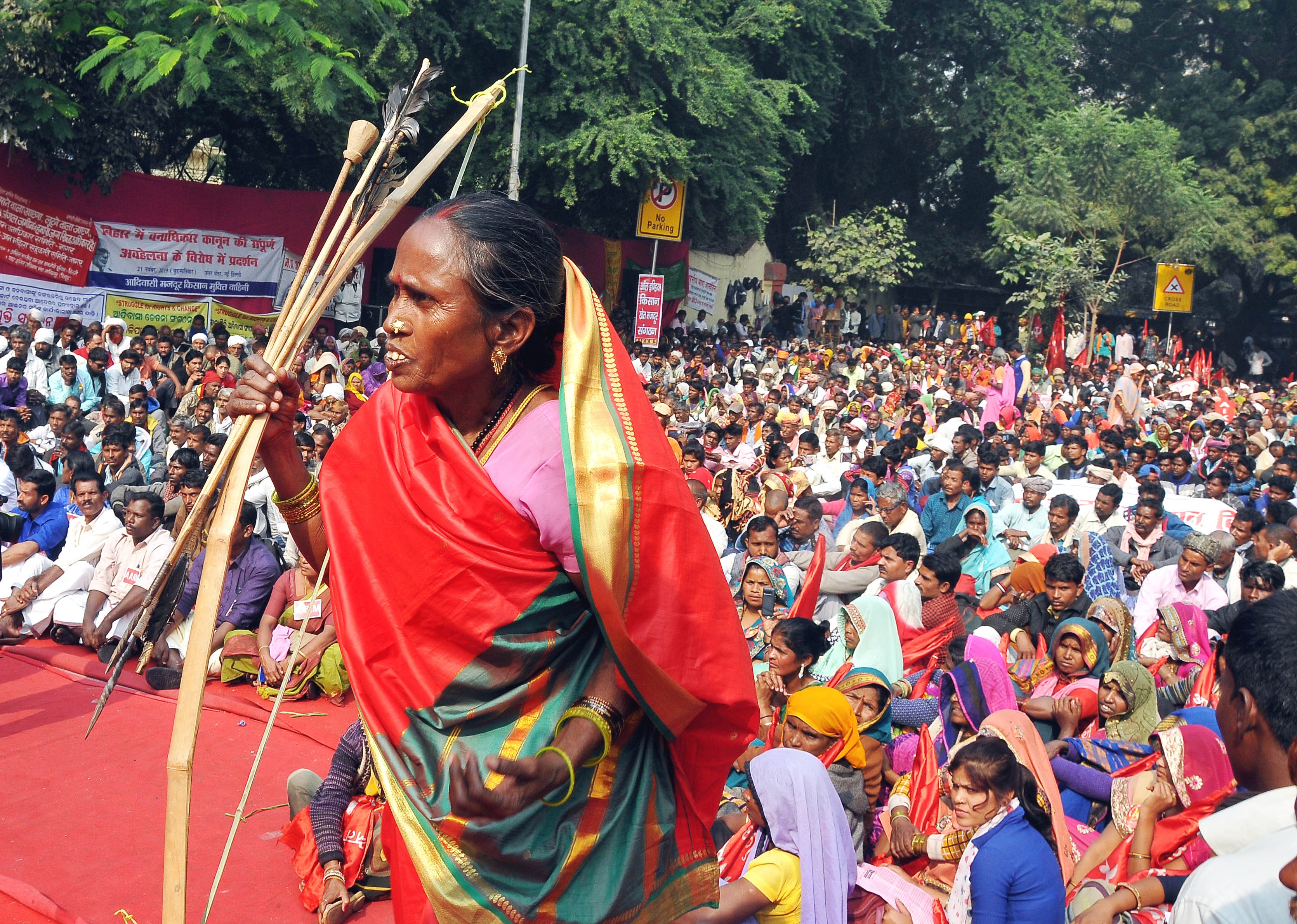 ON November 21, on the nationwide call of the Bhumi Adhikar Andolon (land rights movement), thousands of  tribals and other traditional forest dwellers from across the country assembled at New Delhi’s Jantar Mantar. This was the culmination of the campaign that was started by more than thirty organisations against the Supreme Court’s judgment of February 13, 2019, directing the forest department to evict all those whose claims under the FRA have been rejected. The judgement has come to jeopardise the status and rights of more than 11 lakh tribal and other traditional forest dweller families across various states of the country. The demonstration however, became a rallying ground for declaring longer struggles to uphold the FRA, fastening its implementation and protecting the adivasis’ rights over their ‘Jal, Jungle aur Zameen’ in the days to come.

Hannan Mollah, in his inaugural speech spoke about the background against which the protest demonstration was organised. The Forest Rights’ Act enacted in 2006 came out of years of mass struggles, waged by tribals and other forest dwellers to establish their historical rights over the forests that they have been inhabitants and subsisting on for centuries. The Act underlined the philosophy ‘adivasi hai, toh jungle hai’ (forests exists because adivasis exist), or the tribals and other forest dwellers were considered as the ecological guardians of the jungles. The gram sabha was provided the ultimate power over deciding matters under the law. There are provisions for both individual as well as community claims within the FRA.

However, in a covert attempt to dismantle the FRA, few international wildlife NGOs, including Wildlife First, Nature Conservation Society and Tiger Research and Conservation Trust moved a petition in the Supreme Court asking for eviction of those forest dwelling families whose claims of forest pattas have been rejected, making a case of illegal occupancy and raising environmental concerns. All the speakers at the protest saw this development being backed by profit interests of the corporate lobby, who have been eyeing the natural resources that exist underneath the forests. The FRA still stands in their way of gaining unrestricted entry into forest lands.

The rejection of forest patta claims have to be viewed as lack of political will of the state. Since the enactment of the FRA, only a handful of state governments made efforts to implement it effectively. Measures to disseminate information among the traditional forest dwelling communities about the application process have been lackadaisical, followed by long delays in processing the claims. The high rejection rate of claims has been a concern often raised by activists all across the country working with forest communities. Tripura, under the Left Front government was one of the few states which stood out in the successful implementation of the FRA. The number of forest pattas distributed in the state was the highest in the country, while the steady process of implementation has received accolades from all corners. However, Jitendra Chaudhary, speaking at the protest raised concern over the fact that since the BJP took over governance of Tripura in 2018, no new forest pattas have been given out and there have been attempts at evicting tribal families who were given pattas earlier.

Thus, to make the issue of rejected claims as the basis to pass eviction orders is denying justice to the forest dwellers, many of whom depend on the forest lands and forest produce for their livelihoods. The lack of political will of the central government to safeguard the FRA was witnessed in its failure to depute a public litigator to represent the forest dwelling communities in the Supreme Court while the petition of the wildlife groups was being heard. The onus of such a debilitating legal order lies squarely with the central government. Since the Supreme Court order came out there have been nationwide protests. There were series of protest demonstrations staged in various states on July 22. The next hearing on the issue is scheduled for November 26, and various groups, including the Bhumi Adhikar Andolon, Adivasi Adhikar Rashtriya Manch, All India  Kisan Sabha along with several other organisations have intervened in the case and are expected to depose in front of the court. As a result of the widespread protests, many chief ministers of the concerned states have written letters to the central government asking it to appoint an advocate for the next hearing in this matter.

Earlier in the day the Left MPs, KK Ragesh, Elamaram Karim and PR Natarajan had moved a notice in the parliament to discuss issues pertaining to the FRA. As the speaker denied time for discussion, the three MPs staged a walkout and came to Jantar Mantar to express their solidarity with the agitating tribals and forest dwellers.

However, the recent case has not been the first instance on the part of the BJP to subvert the rights of the adivasis. Brinda Karat, speaking on behalf of the Adivasi Adhikar Rashtriya Manch, highlighted instances of altering the Chotanagpur Tenancy Act in Jharkhand by the BJP state government, which has been a crucial legislation to prevent land alienation among the Scheduled Tribe population of the region. Similarly, the recent case of the central government circulating the draft amendments to the Indian Forest Act, whereby forest officials were granted impunity to carry firearms and shoot people, came under a lot of flak from various tribal organisations. Eventually, the draft amendments were withdrawn by the government.

The July firings in Sonbhadra district of Uttar Pradesh by men belonging to the dominant Gujjar caste, killing ten Gond tribals, yet again brought to the fore the brutal nature of structural violence that the tribals continue to confront when they stand up to demand their land rights. Among the many speakers at the protest demonstration, was a kin of one of the victims. The entire crowd raised slogans in unison demanding justice for the butchered tribals of Sonbhadra.

There were speakers from various states, and political as well as civil society organisations who reported on the vulnerabilities faced by the tribals and forest dwellers. They raised concerns over attempts at diluting the FRA, disregarding the powers of the gram sabha, rampant cases of rejected claims of forest pattas and cases of harassment often faced by the forest communities at the hands of the forest officials.

The protest concluded with Ashok Dhawale speaking on the need to wage larger and longer struggles to ensure that the rights of adivasis and other forest communities are protected. One of the core demands of the historical Kisan Long March from Nasik to Mumbai last year, which saw thousands of peasants marching towards the financial capital garnering solidarity from diverse sections, was the steadfast implementation of the FRA in Maharashtra, and resolving the long pending claims over forest lands. The Kisan Long March had showcased the strength and success of mass mobilisations to make the government bow to the demands of the people.

As of now it is time to test the central government’s intentions towards protecting rights of the forest people to lead a life of dignity, in the court room.