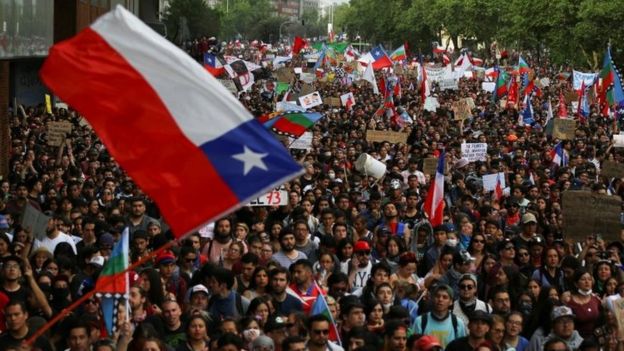 Peoples’ Wrath to Regain the Sense of Hope

PEOPLE around the world are up in protests, giving vent to their growing resentment. In Chile, what ignited the protests were the increase in metro fare by four cents; in Lebanon, it was the $6 monthly tax on Whatsapp calls; in Iraq, they began calling for an end to corruption, improved basic services and more jobs; in Haiti, they started against corruption, high inflation, fuel prices, and food shortages. In Ecuador, they started against the rise in fuel costs, but were basically against the reversal of the decisions of earlier government headed by Rafael Correa and accepting neoliberal prescriptions of the IMF.

While these were some of the major protests that caught the attention of the world due to their sheer intensity, there were many other protests that took place in this period, though not matching the scale of the above, but nevertheless important – in the US, after many years automobile workers successfully struck work in the largest automobile manufacturing plant, General Motors; in Egypt, huge crowds assembled in various cities including Cairo, calling for the resignation of President Abdel Fattah el-Sissi; teachers in Jordan walked out in protest against the government’s refusal to increase their wages and ensure better working conditions; in West Papua, students boycotted their classes and joined the demonstrators against Indonesia, demanding independence. In France, the ‘yellow vest’ protests are continuing every week for the past one year.

All these protests are bound by the common thread of anger against the oppressive economic policies responsible for their great deprivation. The governments of these countries failed to suppress the protests by using force. On the contrary, the police repression unleashed has only intensified the resolve of the protesters to continue their protests till the demands are met.

In Chile, more than 15 lakh people had gathered on the streets of the capital city Santiago, when the right-wing government refused to heed to the initial protests. The transport minister advised the people to ‘wake up early’ and ‘use the metro’, instead of considering the demand for fare reduction. The protesters were labelled, ‘vandals’, ‘criminals’, and ‘lumpens’. President Pinera, stating that Chile was ‘at war against a powerful enemy’, declared a state of emergency, and summoned more than 9,000 soldiers to the streets to deal with the protesters. For the first time, since the end of Pinochet rule, the ‘emergency’ rule was used to deal with a social protest. The bringing out of army to deal with the protesters further incensed the people, as it once again brought to them the memories of the dictatorial rule of Pinochet that had ushered in the neoliberal economic reforms.

Since the restoration of democracy in Chile, successive ruling parties failed to heed to people's demands. Chile continued as a laboratory for neoliberal reforms. The wealth owned by country’s billionaires is equal to 25 per cent of its GDP. On the other hand, nearly 45 per cent of the people in the working age group are unemployed and among even those who are employed, 50 per cent cannot save enough to live a minimum assured post-retirement life. Majority of the working force is highly indebted, unable to pay the costs of education and health for their family members, while those ‘middle-class’ working in the service sector, are bothered by precarious employment. All these factors made them seethe with rage against the government’s move and the attitude of the president and ministers towards their demands. They had come out on to the streets with a steely determination to ‘fight it out now’, declaring that they had ‘lost everything – even their fear’.

The first lady of Chile, Cecilia Morel, reacted typically as another Marie Antoniette – commenting in a private message where she was heard calling the demonstrations as ‘alien invasion’ which might “force her and her circle of people of good will….to decrease our privileges and share with others”. In fact, she was reflecting the views harboured by the entire ruling classes.

In order to safeguard their ‘privileges’, the government used force that reminded of the atrocities committed during the Pinochet period. For the first-time, anti-terrorist laws were used on social protests. According to the National Institute of Human Rights (NHRI), in the police actions on the protesters, 20 people have died, 1,132 injured, and 3,535 were detained. Worst of all, 43 children were found abused by the armed forces during their detention and 19 incidents of sexual violence, including rape under detention were reported. These reports further angered the people who intensified their protests, with all the sections of the populace joining.

President Pinera tried to pacify the protesters by dismissing eight of his cabinet ministers and announcing certain sops – formation of a new cabinet and certain reform measures, like ‘withdrawing the order to increase metro fares, increase in pensions and wages, stable prices for electricity, water, and urban highway tolls, reduction in drug prices, establishment of an insurance scheme for severe illnesses, reduction of salaries for elected officials, and increased taxes on those of higher income’. These were to ‘cost $1.2 billion’ and it was assumed that people will be satisfied.

The protests in Chile have shaken the right-wing establishment in the entire Latin American continent. Brazil's President Jair Bolsonaro directed that armed forces of Brazil should be placed on an alert in the event of protests similar to those taking place in Chile, take place in Brazil. He himself had agreed that ‘Brazil is not free from having problems similar to Chile’. Bolsonaro knowingly or unknowingly had agreed that protests against neoliberalism are protests against US imperialism, when he said that ‘the intention of the social movements is to attack the United States’. To defend neoliberalism and his imperial master US, he wants to put an end to democracy and revert back to dictatorship. According to him, “the protests in Chile happen because the dictatorship is over”. Many other right-wing apologists are critical of Pinera for bowing down to the demands of the protesters and are calling him a ‘coward’. They want him to ‘allow constitution-based repression’ to suppress the protests, instead of ‘offering social reforms’ to the people. This nakedly exposes the attitude of the ruling classes.

It is for this reason that the people of Chile, who have been suffering neoliberal policies for the last thirty years, refused to accept the ‘doles’ and demanded the formation of a constituent assembly to re-draft the constitution. The basis of the neoliberal policies that are depriving them of their share in Chilean wealth have their roots in the constitution, which was drafted to serve the interests of the propertied classes. To protect these interests, the constitution also allows the use of repression on popular protests. People of Chile are now demanding a thorough rehaul of this entire neoliberal framework, including the constitutional guarantees, apart from demanding the resignation of President Pinera. As a grandmother, who was participating in the protest stated, all that the Chileans are chanting is: ‘for thirty years, they gave us thirty pesos, now let them all give up’.

In Haiti, for the last seven weeks, thousands are marching against corruption, high inflation, fuel prices, and food shortages.  Workers are demanding increase in their wages, which are at a ‘miserable’ level. Teachers and students joined protests against the government, rejecting its economic policies. A significant feature is the march organised by the Church, where hundreds of Catholic leaders and their congregations marched through the capital city, demanding the immediate resignation of the President, who is backed by the US. Haitians are demanding a new government for the impoverished country, which is facing one of the worst social, economic and political crises since the last decade. The President of Haiti, Jovenel Moise, rattled by these protests and lacking the wherewithal to suppress them like his famous right-wing brethren down south in countries like Brazil or Chile, directly appealed to their uncrowned ‘king’ – Donald Trump.

Similarly, in Iraq and Lebanon people have come out against the hardships they have been facing under their respective governments, due to the economic policies pursued for the last few decades. They are calling for an end to the political system that they identify to be extremely corrupt and has failed the people. They specifically point to the way governments are formed on the basis of sectarian or ethnic quotas. They are demanding sweeping fundamental reforms to be undertaken at various political, economic and social levels.

In Iraq, armed forces that fought against the IS and were respected by the people, were used by the government to suppress these protests. Nearly 200 people are dead and several thousands injured due to the repression unleashed by these forces, making the people hate them now. The enquiry report on repression proved to be a sham, further angering people and bringing them out in larger numbers into the protests. They are now demanding the resignation of the present government, strengthening of the democratic process and immediate conduct of elections to elect a responsive new government.

Lebanon is one of the severely indebted countries in the region and the government had agreed to ‘reform’ the economy to come out of this indebtedness. Already the working people and common citizens are burdened by the inequalities and high-level of corruption, forcing them to resist the recent attacks on their livelihoods. The government responded to the current protests by rescinding on its proposals to increase taxes, while cracking down by unleashing repression. Neither of these measures have deterred the protesters, who have vowed to stay on the streets until the government falls.

A section of the protesters are demanding the establishment of an ‘independent technocratic’ government in the place of the present governments in Lebanon and Haiti. But the experience of Iraq (where a similar independent technocrat was chosen as the prime minister), where protests are taking place on more or less similar demands, shows that formation of such a government is not a panacea to their problems. As the Chileans are demonstrating, only through a thorough overhaul of the political systems in their respective countries, peoples’ persisting problems can be resolved.

Communist parties in Chile, Iraq and Lebanon are actively participating in these protests and playing a leading role in mobilising people. Many leaders of these parties, who were in the forefront, stood up to the police repression. A heartening feature is the unity displayed by various parties, organisations and social movements who have joined hands against the regressive economic policies and the repressive regimes. To regain our ‘sense of hope’ there is no other alternative, except carry on with our struggles. Experiences of these countries reconfirm and lead us through this path.