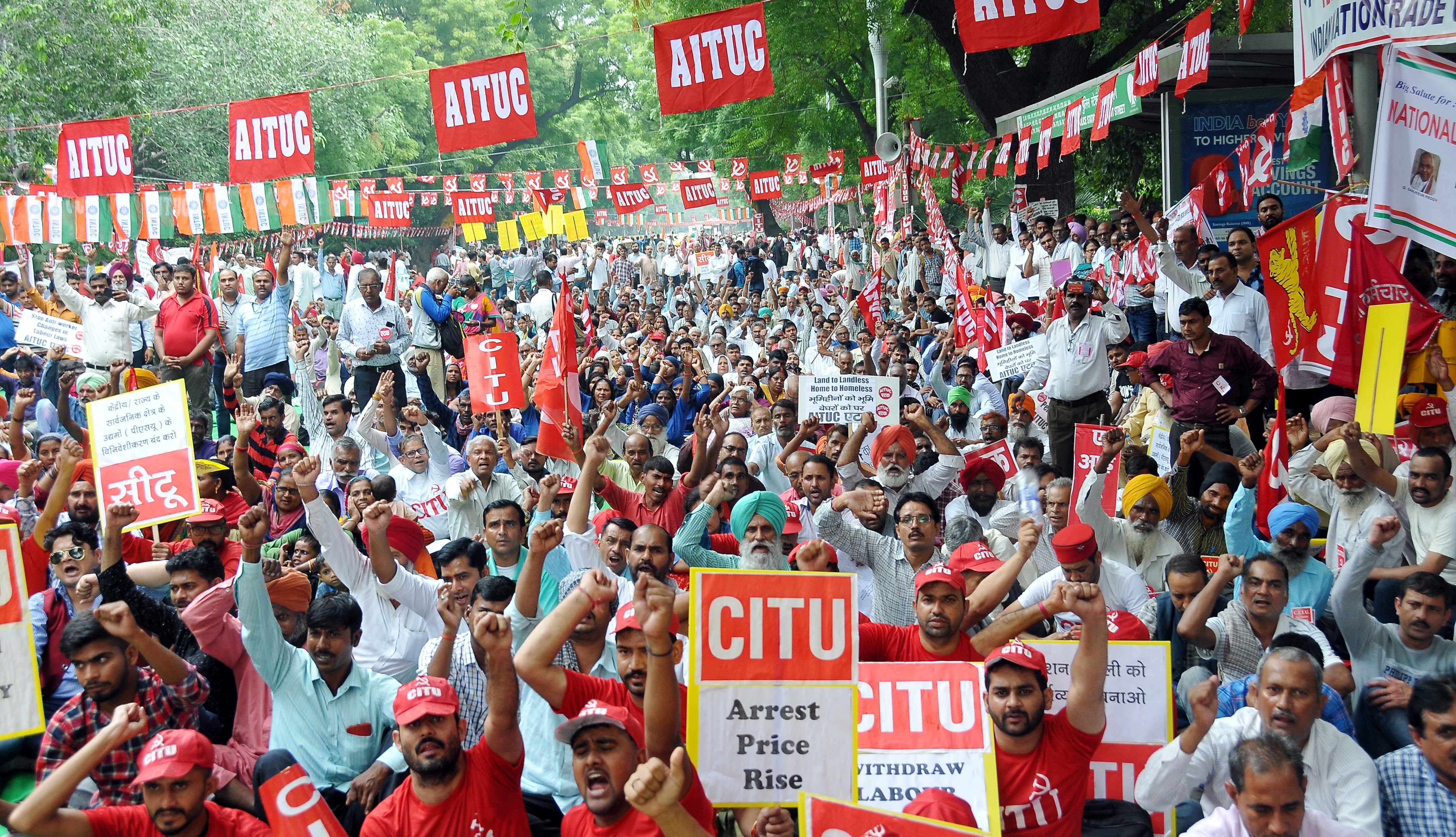 This was the clear and unambiguous message from the massive open joint national convention of trade unions held near Parliament on September 30, 2019.

The working class has decided to go on a country wide general strike on January 8, 2020 against the ruinous attempts of the BJP government led by Prime Minister Modi to sell off national wealth to the foreign and domestic corporates. This is the first and initial response of the united working class movement to the ‘big bang reforms’ of the BJP government led by Modi in its second and more aggressive avatar.

The joint national convention, from which the call for strike was given, was convened by the joint trade union platform comprising the ten central trade unions, except the BMS and almost all the independent national trade union federations encompassing almost the entire working class of the country.

Thousands of workers from all over the country, belonging to trade unions affiliated to INTUC, AITUC, HMS, CITU, AIUTUC, TUCC, SEWA, AICCTU, LPF and UTUC participated in the convention. In addition, workers and employees representing their independent national federations in different sectors – central and state government, postal, defence, railway, insurance, bank and telecom employees participated in the convention. Workers from key sectors - oil, gas, coal, electricity, road transport, steel, as well as from unorganised sectors like construction, domestic and home based workers were also present. Similarly, employees and workers from the health and education sectors and scheme workers were present in thousands.

To accommodate the large number of workers who wanted to vent their anger against the government’s policies, the convention was held, not within the confines of any hall but, in the open, near Jantar Mantar, New Delhi.

The joint declaration in English and Hindi was distributed to all the participants as the convention began.

The declaration exposed the ‘achievements’ of the Modi led BJP government within 100 days of coming to power for the second time:

Corporatisation of our railway production units also amounts to the same. In addition, private trains will be operated on the existing tracks built by Indian Railways. The private operators will decide the fares (naturally there will be no concessions for the old, disabled, cancer patients etc.), the services which they would provide etc. Two private trains will run from October 5. Railway stations will be handed over to private corporates.

In short, the measures of the government are directed to safeguard the profits of the foreign and domestic corporates. They have been given them the grand title of ‘wealth creators’. Tax officers are warned not to harass them. At the same time the real wealth creators, the workers and other sections of the toiling people continue to be robbed of whatever little benefits and rights they have won through decades and centuries of hard struggles. The nation is being looted of the wealth created by the workers, peasants and the common people.

The convention highly appreciated and congratulated the working class, which has already started resisting these anti national and anti worker measures despite voting for the same BJP government in the Parliament elections. The tribals of Chattisgarh fought against iron ore mining in Bailadila project, for which Adani Enterprises Limited was appointed as the contractor, and forced the government to retreat. The workers of all the railway production units along with their family members have been on struggle since the government announced corporatisation of the production units. The defence employees went on joint strike for 5 days against the corporatisation of the defence production units. Coal workers conducted pit level demonstrations and dharnas followed by a magnificent and unprecedented strike 100 per cent strike on September 24. The bank employees have decided to go on joint strike against the merger of banks. Employees of Steel Authority of India have been on struggle path in its various units against the decision of its strategic sale. Anganwadi employees, ASHAs, midday meal workers in many states are fighting at the non implementation of the recommendations of the Indian Labour Conference and privatisation measures.

It is in this background of growing struggles clearly indicating the rising discontent and sense of disillusionment among the workers that the joint national convention called for a country wide general strike on 8th January 2010. The strike will be preceded by extensive and intensive campaign including state, district and industry level joint conventions during October – November, distribution of the Declaration in local languages in crores, sector wise leaflets linking the concrete issues of the workers with the policies of the government and exposing the politics that have been guiding these policies during the last around three decades. Grass root level meetings at the factory, establishment and institution level will be held in December.