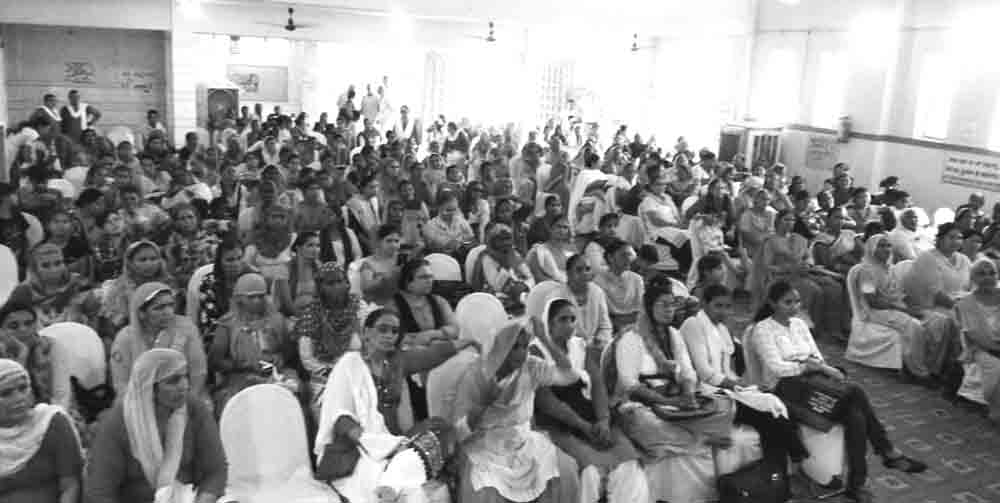 THE 10th Haryana state conference of AIDWA was held on August 31-September1 at Bhiwani on the issues of drug abuse, liquor menace, patriarchal ideology manifesting in various formsand other issues confronting the people and the women in particular.

The open session was presided over by Shakuntala Jhakhad, state president of AIDWA and Shubha who is a famous poet and writer.

The open session was addressed by Subhashini Ali and Mariam Dhawale-central leaders of AIDWA, Mahendra Chawla(who testified against the ills of Asaram Bapu) and Savita-state secretary.

Subhashini Ali spoke about the challenges which the women and the women’s movement face in contemporary times. She said the state of Haryana boasts of slogans like “Beti Bachao, Beti Padhao” (educate and save the girl child); however this slogan in reality is completely hollow. The gender ratio in the state is badly imbalanced, she said. Honour killings are rampant and the government targets the women’s movement to silence their voices.

Maram Dhawale, general secretary of AIDWA said the BJP government at the centre is trying to divide the country on communal and caste lines. The women are exploited in twin forms, she said. The informal sector, which is now 93 per cent, employs women in a larger ratio and the working conditions are very bad. In the present economic crisis women are the first to be chucked out of their jobs. The latest data is very disturbing. There is an unemployment rate of nearly 10  per cent but for women it is 25 per cent, she said. Building the movement of the people is the only alternative to counter these attacks on the people.

Shubha spoke about the evolution of the Indian constitution as chaired by Ambedkar and how it explicitly mentioned about equal rights for women. However, she said, the present BJP regime is determined to dismantle the constitution by imposing its ideological moorings, which flows from the Manusmrithi.

Chanchal Dhir, president of the reception committee welcomed the delegates in the hall which was named as “Gauri Lankesh Hall”. The conference was also greeted by many fraternal organisations like CITU, Sarv Karamchari Sangh, Haryana School Teachers Association, DYFI, SFI and AIAWU.

Savita placed the report of the state committee. She gave narration of the political environment in the state. The report also highlighted the important tasks that the women’s movement will have to undertake. These include struggle for equality and women’s emancipation. The report further stressed on the importance of building a strong organisation and building units and strengthening them ideologically.

Twenty one delegates took part in the discussion. The main issues that were highlighted during the discussion include liquor menace, drug abuse, domestic violence against women, rising price of essential commodities, food security, communalism and casteism. The conference was attended by 180 delegates. Jan Natya Kendra Rohtak staged cultural performances.