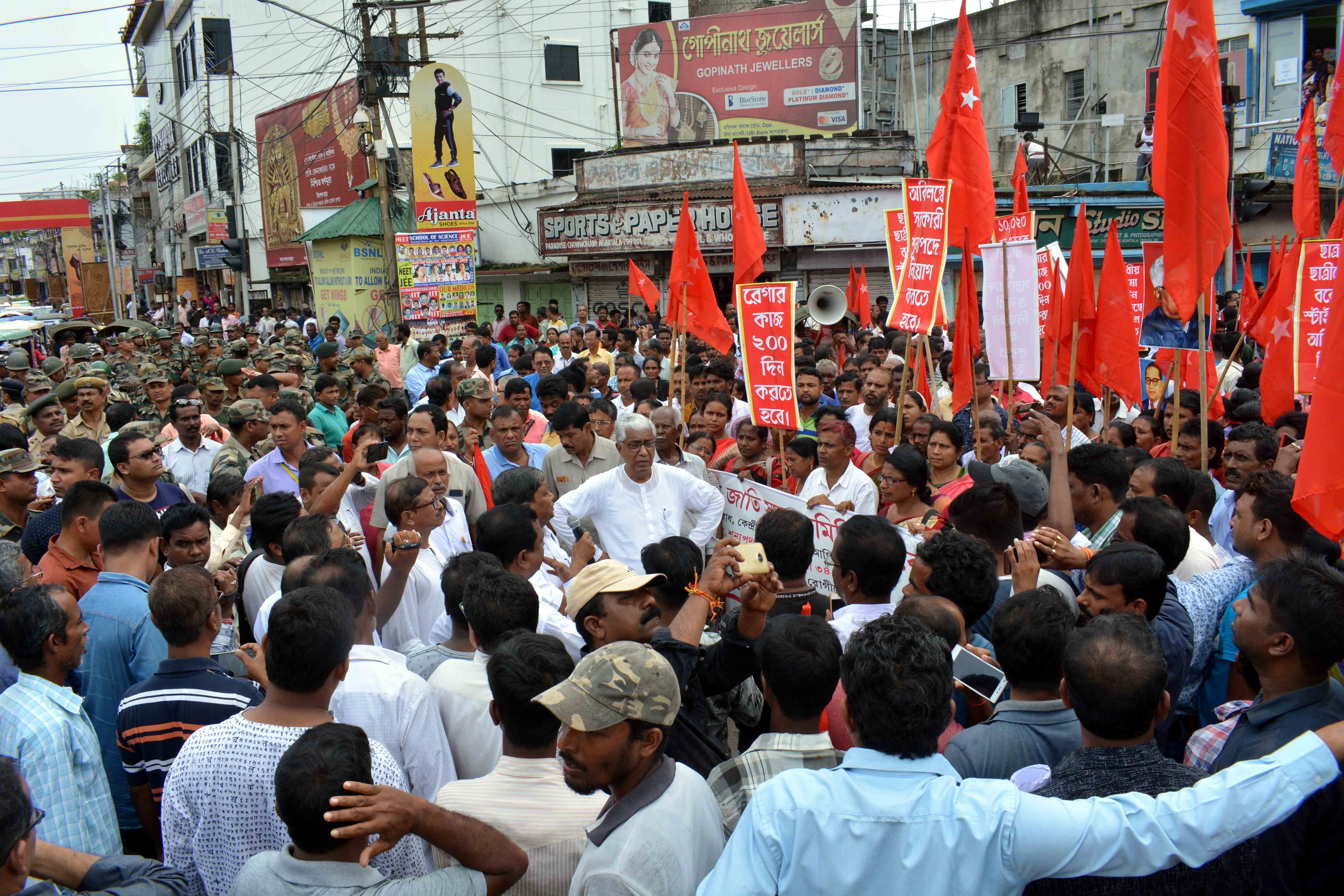 IN an unprecedented move, Tripura Police in Agartala had suddenly stopped a march convened by the Tripura Tapasili Jati Samanway Samiti (TTJSS) as part of an all-India protest call. A convention was organised on September 1 as part of it and the police permission was sought much in advance. But initially, they denied permission on the grounds that the date coincided with the day of by-election to the Badharghat assembly constituency. Then it was rescheduled for September 25. On the night of September 24, police asked the organisers to change the place from where the march was to start. When, at the rescheduled place, thousands of people gathered and the march was about to start, police revoked the permission. TTJSS president Ratan Bhowmik and general secretary Sudhan Das, both MLAs, sought time to meet the chief minister for granting permission. But the chief minister declined to meet them. However, ABVP was given permission to hold a procession.

Bhowmik and Das, later in a press conference, decried the role of the chief minister and said the police was acting under pressure from the BJP. The CPI(M) state secretariat said in a statement this incident is proof enough that the government is undemocratic and autocratic.

Around 10,000 people gathered for the TTJSS rally on September 25, which was all-set to proceed towards the Raj Bhavan at 11 am with their nine-point charter of demands. The marchers were to submit a deputation to Tripura governor Ramesh Bais, but the police withdrew permission for the rally around 12 noon. TTJSS leaders tried to discuss the matter with the police. As their efforts failed, the leaders asked the workers to sit on the ground as the rally was not allowed by the police. Former chief minister and CPI(M) Polit Bureau member Manik Sarkar asked the workers to maintain peace and not to create any chaos.

While the permission was withdrawn, the police did not brief the media, allowing the BJP propaganda machinery to churn out lies. BJP workers spread on social media that the CPI(M) didn’t take permission from police for the rally.

TTJSS leader Sudhan Das slammed the BJP government, saying the BJP is so much afraid of the CPI(M) that the party is not being allowed to hold rallies. “By such moves, nobody can stop the Left movement. As much the BJP will stop us, we will move back again and again. CPI(M) will regain power in Tripura by unseating the BJP,” he said.

MLA Ratan Bhowmik slammed the police, saying, “Shame on such police department which cannot take a decision independently.” Across the country, severe attacks on dalits are being carried out, especially since the Modi government assumed office at the centre, he said. Every day on an average nine dalits are murdered and 19 women are raped. He also flagged the rising incidents of honour killings and said it victimised Amrita and Pranay, by killing Pranay mercilessly. In July, Sakshi Mishra, daughter of BJP legislator Rajesh Mishra, marrying a man outside her caste, was attempted to be murdered. Another 22-year-old man was burnt by petrol for the same cause. In Tripura’s Bishalgrah, Madan Nama was beaten to death. Sukhu Gour, another dalit, was killed mercilessly by BJP miscreants. Prasanna Bhattacharjee’s daughter married a non-Brahmin man and after two years when she came home with her husband at Kumarghat, BJP-RSS supporters rushed to their home and attacked them and the Brahmin family was ostracised. “It is our duty to raise voice for the dalits and TTJSS will continue raising voices,” he said.

The movement was also against privatisation of government institutions. Manik Sarkar told senior CPI(M) leaders and workers, “They (police/government) want to instigate a chaos. Let us maintain peace.”