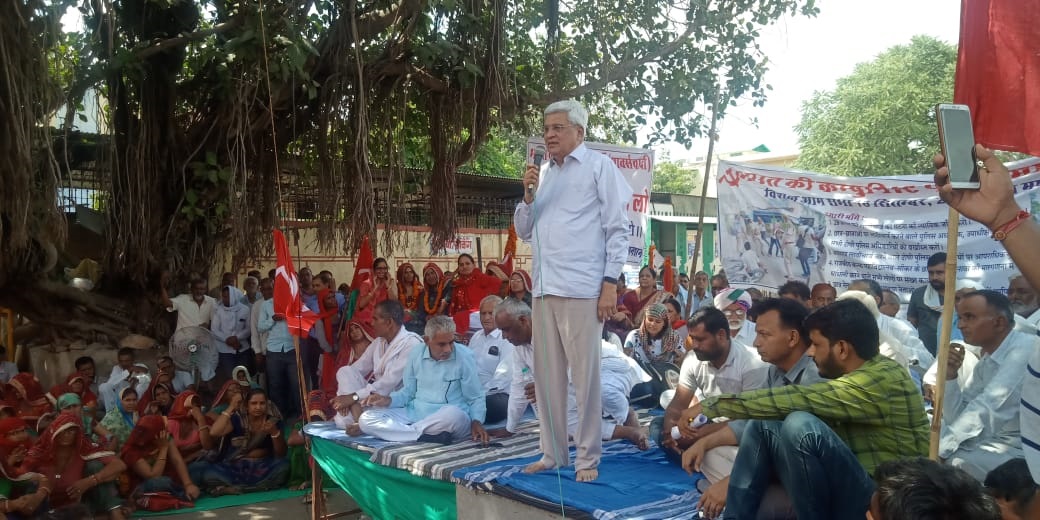 After a prolonged persistent struggle initially by the students of Sikar college in Rajasthan, and then led by the CPI(M) against the brutal cane charge on girl students; the demands of the struggle were eventually met by forcing the state government to transfer the district magistrate and the police chief. The agitation continued for over 24 days from August 28 when the students were attacked by the police.

HOW IT ALL STARTED

On August 28, counting for the student’s council elections was going on. In Sikar Science college, the SFI had won all the four seats by a margin of 250 votes. Counting was also going on in Sikar girls college where principal of the college, who is an old activist of the ‘sangh’ declared ABVP candidate elected for the post of president by a margin of one vote. When the girls demanded re-counting of the votes, they were brutally cane charged by the police, led by none other than the district police chief, Saurav Tiwari. Not just that, the police later entered the office of the CPI(M) district committee and arrested Pema Ram former MLA, Kishan Parik-district secretary of the Party, Satyajit Bhinchar-youth leader and beat up many activists in the office.

As an immediate reaction to this highhandedness, a public meeting was held on August 30. It was declared through the rally that the government must act against the erring officials and a time period till September 8 was given to the government. The government remained mute and the CPI(M) on a declared programme picketed roads leading to Sikar including the national highway. On September 9, by 10 am major roads were blocked. A large section of the people also participated in the action. The trading community also participated in a call for a bandh. The administration tried all its tools, from intimidation to issuing  threatening calls to the people to not to join the struggle. However the strike was phenomenal. Amra Ram, state secretary of the CPI(M) along with other activists marched on the streets of Sikar; the trading community also showed its resentment against the lathicharge; the bazaars remained completely shut. The bandh was not limited to Sikar, spontaneously the bazaars remained shut in Laxmangarh, Danta, Dhod, Losal, Khood, Baye and Khatushyamji. Massive road blocks occurred in Agra-Bikaner highway, Palsana, Sanwali circle, Naani, Badhadhaar, Khudi Pratappura and Fatehpur. A call for further sharpening the struggle was given and it was termed as “Aar Paar Ka Sangharsh” (Do or Die Battle) on September 16.

On September 16, by 12 noon, the shed of the Anaj Mandi in Sikar was overflowing with people. The police and the district administration had warned the people to not to join this protest meeting. The inspector general of police was himself present at the site and had brought the entire wherewithal to ensure that the people do not move out of the venue of the meeting. However the sheer number present at the meeting dissuaded the administration from doing anything silly, and could not force the people to remain at the meeting venue.

The meeting was addressed by Vasudev Sharma, Central Committee member of the CPI(M) and Balwan Poonia, CPI(M) MLA in Rajasthan assembly. Both of them lambasted at the government and demanded immediate action against the erring officials. Amra Ram was the main speaker of the rally.

After the public meeting, a march was taken out in the city, though the administration had made preparations to stop it. It could not be stopped as the number of people who participated in the meeting was beyond their expectations and they could in no way have controlled such a march. The march went to the residences of the district magistrate and the police chief. The administration was taken by surprise and started panicking and called for more reinforcements. But even this could not stop the march. Amra Ram lambasted the administration and said those who were responsible for beating the girls of the regions will not be spared by the people. This led to a call for an indefinite ‘mahapadav’ (picketing). In the evening the administration called for a meeting, but it remained inconclusive.

On September 17, the divisional commissioner of the region called for another meeting. Amra Ram along with 7 members attended this meeting but this also fetched no results.

However, in the meantime, the principal of the girl’s college was declared APO(shifted from the college against post) and Sunil Jangid (Sub Inspector) and Manoj Dhaka-police constable were sent to the police lines. In the mahapadav, every day from 11 am to 5 pm public meeting were held which were addressed by people from the villages and other party activists and leaders. In the evening cultural programmes were organised.

There was no breakthrough till September 18. Amra Ram on September 19 gave a call for chain hunger strike along with mahapadav. Eleven activists sat on hunger strike. On September 20, Prakash Karat, Polit Bureau member of the CPI(M) addressed the public meeting in Sikar.

Prakash Karat broke the day’s fast by serving juice to the agitating strikers and fresh batch of women activists comprising Rekha Jangid, Tara Dhayal, Saroj Bhinchar, Kamla Chaudhary, Kamla Ranwa, Savita Bhuriya, Ramchandri, Subhita Bhinchar along with others sat on chain hunger strike. Prakash in his address said that the Gehlot government must understand the consequence of the agitation and accept the demands of the people. The SFI, he said has won in many colleges in Sikar and other parts of Rajasthan. This agitation if it spreads will reach to other regions of the state. While lambasting at the BJP government in the centre he said that the attacks on the people have increase since the BJP government came to power. Its second term is all the more scathing. On Kashmir, he said the people are in despair and the BJP is communalising the whole issue. In Delhi, he said the Left Parties are holding a joint convention, where a movement against the growing attacks on the people will be launched. A further call for a statewide movement on September 23 was given on the same evening by Amra Ram.

Meanwhile the chain hunger strike continued on September 21 and 22. On September 22, Amra Ram announced that tomorrow i.e., 23rd, the administration in a large number of districts of will be completely paralysed. A call for self respect of the people was given and they were asked to turn out in large numbers. During the same time political developments started taking place. The chief minister called Balwan Punia, MLA and conveyed that majority of the demands have been accepted by the state government. Amra Ram while calling off the struggle said that the demands of the people to shift Saurav Tiwari, Sunil Jangid and Majon Dhaka have been accepted. He further said the district magistrate has already been transferred and the principal has been declared APO.